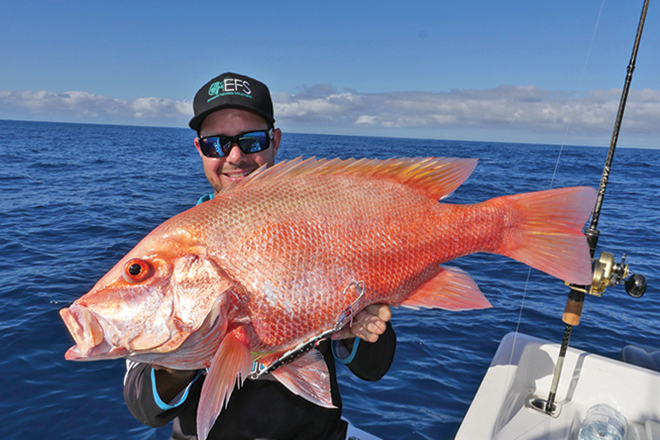 WITH the low-pitched burble of the V8 LandCruiser idling, and trying not to wake the whole street, we lined up the tow ball and dropped the boat trailer onto the tow bar.

We looked at each other like excited kids at Christmas, bubbling with anticipation of what the day ahead would hold. With favourable wind and good tides, we were finally hitting the water for a bit of slow-pitch jigging. Now as a fisherman, I’m always up for trying something new to broaden my experiences and increase my catch rate.

We had been playing around with slow jigging for a while but on this trip we’d be getting some instruction and direction from a mate who employed ‘fishing slowly’ on a regular basis and one of his good mates from Extreme Anglers Australia, the Aussie distributor of Volante Jigs. These two guys can really do it slow and they were going to give us a crash course in how effective this style of fishing can be when done properly.

Now we aren’t talking about micro jigging, we’re talking about slow-pitch jigs with weights of 90-200g to match the depth and tidal flow of the areas we were fishing. We have used lighter slow-pitch jigs for closer inshore fishing but needed the larger jigs to fish the depths on this day. After a considerable run north in quite a large swell, it was time to drop some of these fluttering lumps of metal to the depths and encourage a few fish to play the game.

A quick description of a slow-pitch jig is an oval-shaped lump of metal with an asymmetric design (different-shaped surface on each side) with a rigging point on each end, generally with hooks rigged on one or both ends. This shape difference allows the jig to flutter as it rises and falls. This fluttering action imitates a distressed fish and is designed to entice larger fish to strike.

Retrieves with this style of jig at first seem a bit strange. Action is mostly imparted with the reel, not the rod. Half, quarter and full turns of the reel handle load the rod, in turn lifting the jig in a fluttering pattern. After arriving at our chosen location, we began searching for small areas of bottom that held structure and bait.

Even though larger fish may be sitting on the bait schools, it doesn’t mean they are going to smash your jig on the first drop. Sometimes it takes a few drops to wake them up and induce a bite.

The first fish to come aboard with a new piece of jewellery was a good-sized grunter. It was high fives all round and a quick pic before it went straight into the Esky.

With the first fish over the side, we all became a little more at ease and figured we might be in for a good day. Fishing these smaller areas, your drifts aren’t very long. Once we motored up-current again it was time for a second drift over the same area. Same deal, we all dropped our jigs to the depths and let them speed to the bottom so we could start our retrieves. Wind, wind, wind and smack!

Three out of four of us hooked up simultaneously. Our other mate quickly wound his jig up off the bottom so it wouldn’t get snagged, put the rod in the holder and grabbed the camera to get some fight footage. Before he could press record, his rod doubled over with a good fish as well. Now we had a four-way hook-up on rampant fish trying to bury us all in the reefy bottom.

With a fair bit of yahooing and general carrying on, we all managed to get our fish to the boat, each with a different species to put in the icebox. Our flukey mate had nailed a good-sized large-mouth nannygai that fell victim to the rod holder retrieve style. It just goes to show these jigs will flutter with the smallest movement. After a few more fish went into the box, this spot shut down and we searched further for more productive ground.

As the morning progressed we fished awesome ground where we could see large predators hassling bait on the bottom but we received only limited interest. We decided to look around until the turn of the tide, and it was then that the fish decided they were going to play the game. Jigs down, wind, wind and smack, my rod buckled and was nearly ripped from under my arm.

Before I could strike and try to turn the fish’s head, I was dusted on the bottom by something that wanted my jig more than me. Time to re-tie, motor up for another drift and try for another hook-up. The same thing happened again and my efforts were totally wasted, with only frustration to show for it.

That’s two epic bust-ups I won’t forget soon. As the day progressed, we managed a great mixed bag that was probably one of the best we’d caught in a single session in quite a while. And not one piece of bait was used, just slow-pitch jigs.

Slow-pitch jigging is a great way to target a wide range of species, and with a bit of practice and pointers in the right direction can be a very effective way to put a few good-quality fish in your Esky. Slow-pitching gear is a bit different to our normal bottom-bashing gear. Our gear consisted of light rods with a long taper but heaps of power in the lower end of the blank.

They seemed to bend forever. We paired them with relatively small high-speed overhead reels, PE3 braid and 40lb good-quality leader. This type of gear looks a bit strange when fishing wide offshore but it comes into its own for this style of fishing and boy can it turn large fish off the bottom. On this day we used larger jigs to get to the bottom but it pays to have a variety of weights in your box to swap out as the current speeds up and slows.

So give it a go – go slow and be surprised.
Once you’ve done it, you’ll be back for more.