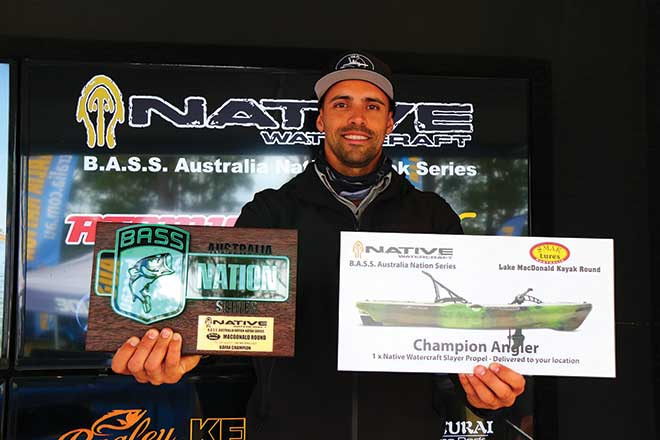 Felippe Gapski took out the title at the Smak Lures Lake Macdonald Kayak Round.

THE Native Watercraft Kayak Series skipped into top gear recently, with 26 anglers hitting the shores of Lake Macdonald for the Smak Lures Kayak Round in southeast Queensland.

An angler who hasn’t been fishing for bass for very long, Felippe Gapski, took out the title after using a combination of different blades around the Three Ways area and locating fish on his electronics. With variable weather during the Smak Lures round, the anglers found the lake produced in some sessions but was really tough in others, proving bass really like steady weather for a consistent bite.
Felippe landed cracking bass and won a brand-new Native Watercraft Slayer Propel 10 in the process.

He pipped his good friend Alan Britcliffe who also managed to catch the Tonic Big Bass of the event, landing a cracking 1.81kg Macdonald bass. Rounding out the top three was Greg Rigby who made a great comeback after having a tough first session to really put the pressure on the leaders.

With only one round to go in the kayak series, seven anglers are still capable of taking out the Native Watercraft Kayak Angler of the Year title, so stay tuned for the results. Next month we will have all the details on the motackle.com.au AOY Clash to be held on Bjelke-Petersen Dam in the South Burnett region.

One Co-Angler is going to win the title and also a trip to the US to compete in the 2018 B.A.S.S. Nation Championship. With quite a few anglers still able to take out the title, this event will be one of the hottest all year, so look out for the blow-by-blow highlights at bassaustralia.com.au