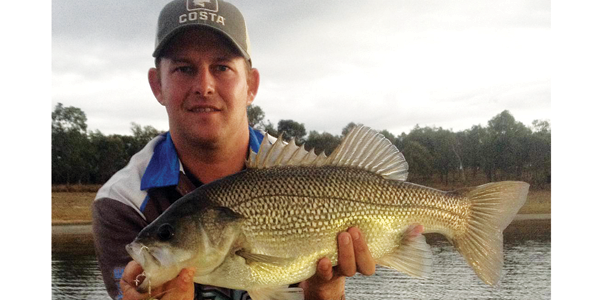 A 53cm bass taken from a weed edge on a Bassman Spinnerbait.

ALL through winter the fishing didn’t change considerably in the South Burnett, with cracking catches of native fish recorded. The fishing is still running hot, so no matter what angling style you use, you’re sure to hook up with a few fish in Boondooma and Barambah dams over the coming weeks.

The growth of weed beds on some of the dam’s edges has opened up the opportunity for a fantastic edge bite. If you’re an avid lure fisher, this is where I would start and end the day.  The secret has been throwing 3/8oz spinnerbaits as tight as possible to the weed edge and rolling them back with a slow retrieve.

I like to use the 3/8 Carls Compact Bassman Spinnerbait with one small Colorado blade because this prevents weed becoming entangled in the blade assembly and stopping the spinnerbait from working. If you cast tight to the weed edge and roll out you will occasionally get stuck in the weed, but the trick is to give the rod tip a quick rip to free the spinnerbait and continue winding.

Remember, early morning and late afternoon are the best times to target the weed because the fish will be hanging in there ready to ambush any offering thrown their way. I’ve caught some ripper 50cm-plus fish using this method, so stick with it because it could result in a trophy bass.

The other option that has been working is casting suspending jerkbaits to the weed. Use the same method and make sure you add plenty of pauses to your retrieve. Jerkbaiting the weed is a cool way to fish because your drag can peel of the reel before you realise you’ve had a hit.

Have a look around the mid sections of the dam or up in the Stuart arm if you want to find the productive weed edges. Later in the day when the wind starts to pick up, I like to move out deeper around the flats and target schooling fish with Nories tailspinners, soft vibes and Ecogear VX blades.

Pelican Point, Barbers Pole and Death Valley are good spots to start looking for schools. Please check in with the kiosk if you’re unsure of the names of places around the dam. The secret is using your sounder to slowly move around until you’ve found the fish sitting close to the bottom.

Once located, start employing long casts and keep the lure as close to the bottom as you can. I like to use a very slow or hopping retrieve to induce a strike. It’s also a good idea to move around a bit because the fish very quickly work out that you’re there and native fish don’t respond well to pressure.

Bait fishers have managed good catches of yellowbelly in the Boyne arm of the dam while fishing close to trees and the Boyne rocks. Most have used saltwater yabbies and worms. It’s a good idea to attach smaller sinkers because the bite is hard to detect if you’re using huge ball sinkers.

Simply tie up to a tree, drop your bait to the bottom and slowly move it up and down. It won’t be long before you get a bite. Trollers have also done quite well on the yellowbelly in the timber of the Boyne and Stuart arms while towing smaller deep-diving hard-bodies.

Make sure you take a tackle retriever with you because you’re bound to get a snag or two while trolling. Red claw are still being captured in fairly good numbers around the shallow rocky edges. Soft fruits and vegetables have been the best baits during the cooler months.

Typically Lake Barambah doesn’t fish that well during winter, but over the past few weeks the fish haven’t been following that trend. Numerous anglers have snared excellent catches. Basstasstic Bass Fishing Tournaments recently held a teams event at the dam and most anglers weighed in full bags.

The deeper flats have produced lots of fish, be it bass or yellowbelly. Jigging blades has been the best method. Most anglers have been sounding fish in about 9m of water and sitting on top of them. Ecogear ZX blades have been the real standout because they have two small stinger hooks attached.

Drop them to the bottom and retrieve with small sharp hops. A fish only needs to touch the blades for the stinger hooks to very quickly grab them. The best spot has been the big flat out from the main dam wall. The edges are also likely spots to look.

You won’t catch huge numbers of fish but you will get the bigger ones from the edge. I recently landed solid 40cm-plus bass by fishing blades to the edges. Ecogear VX and Evergreen Little Max blades were the most effective. Most fish in the dam are gorging themselves on small bony bream, so it’s a great idea to throw anything that looks like a small baitfish.

Look for steeper banks that hold some timber or rocks because fish will likely be looking for bait in the shallows there. Bait fishers are getting a tonne of solid fish from Lake Barambah. Most have been tying off to trees and vertically fishing saltwater yabbies with small hops.

I recently witnessed a couple catch their bag limit in under an hour. I was so impressed that I almost switched to bait. Big yellowbelly and good numbers of bass have been taken on bait. The best places to fish are the steep banks off Bass Point and the timber up the back of the dam.

Trollers are catching the odd fish in the timber and around the main lake points on small deep-diving hard-bodies.  Red claw have gone very quiet but should start popping back up as the water gets warmer. Don’t forget, if you have any tackle needs, both dam kiosks stock a great range of lures and tackle to keep you on the water and catching fish.

Both dams feature excellent school holiday activities including nightly outdoor movies. On Friday and Saturday nights the park staff cook some of the best wood-fired pizzas you will ever eat. If you don’t believe me, you’ll have to come and try them for yourself.

To top it all off, you’ll be looked after and enjoy fantastic fishing. Until next time, tight lines and bent rods.

Previous Salt and vinegar crumbed whiting
Next Fishing line rules: don’t get in a tangle