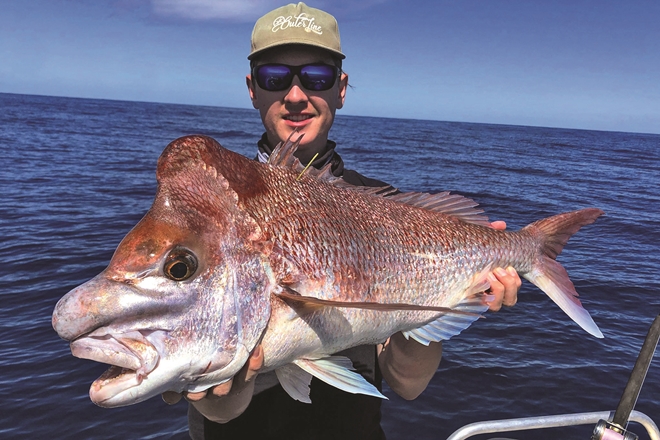 The author with a cracking knobby taken on a float line. How'd the mug on it!?

MY lovely editor Dan Tomlinson sent me a message asking me to pen a small wrap-up on the southeast Queensland offshore fishing situation, which I must say has been going off in many instances.

Offshore from South Passage Bar and Double Island Point have both fished really well for a variety of bottom and pelagic species. I have mainly been concentrating on hunting snapper and other prized bottom fish such as red emperor and pearl perch. Common fishing partner Grinner and I still haven’t been able to crack a legal DI red but we have been rewarded with awesome consolation prizes in the form of trophy snapper and big pearlies.

We have spent a lot of time sounding for fresh ground on the southeast Queensland offshore fishing scene and adding new marks to the book. Something that never fails to amaze me is the number of isolated rocks and reefs in the middle of nowhere. In one instance, we ran over an awesome-looking rock covered in bait and fish, and the first drop on a bottom basher and whole squid saw Grins connect with what we both thought had to be a red.

We were quite surprised when a 90cm knobby graced us with its presence. The next drop saw yours truly connect to another solid fish on the float line, and after a quality tussle an 85cm snap slid into the net. Both these fish were extremely lucky to be tagged and returned to the water, as I believe most people think snapper are quite tasty!

I couldn’t bring myself to keep one that big when I still have coral trout fillets in my freezer. I also donged a 60cm pearlie off the same rock before getting blown away by three big AJs. We decided to spend the rest of the day sounding for new ground and were pleasantly surprised to find heaps of rises, broken bottom and individual rocks.

These were all promptly marked ready for next time. I’m hoping I find a break in the weather to get to Double Island again before the end of the year.

My fishing time off South Passage has been quite limited due to work and school commitments. However, I managed to have an awesome after-school session during a break in exam block. The very first cast saw a nice 85cm snapper belt the plastic on the way down.

These fish are awesome fun on 20lb spin gear. I must give credit where it’s due. I have been running a 12-30lb Venom Spin rod from the Wilson stable. It has copped an absolute roasting over the past two years and still goes hard. I popped a tag in the 85cm fish, grabbed a few pics and let it power off. That marked my sixth snapper over 80cm tagged for the season.

It will be quite interesting to see any data gained from recaptures. The next cast saw me hook an enormous longtail tuna. I don’t throw estimates around very often but after seeing it multiple times and fighting it for over an hour, I am confident in saying it was well and truly 30kg. It was completely spent after the fight and my mate was leaning over the side ready to grab its tail when it finally chafed through my 20lb leader.

It sat there stunned for a second before slowly cruising off. The fish was easily 130-140cm long. My mate and I looked at each other almost to say ‘you’re kidding me’. I wasn’t overly upset as to me tuna are a bit of a vermin species but it would’ve been nice to land a trophy after a long fight. After this we gathered some livies and hit a reef in deeper water on the hunt for samson fish and other brutes.

On the first drop I deployed a yakka that got inhaled just off the bottom. Before long a solid goldspotted cod came to the surface. I tried to vent it and let it go but it simply would not go down. It didn’t go to waste though, as I gifted it to an older family friend who has given up fishing due to health problems.

I nailed a solid tuskfish on the next drift, which I shook off beside the boat and let free. I was in no desire to keep anything because I still had tasty reefies in the freezer at home. It seems yellowfin tuna and dolphinfish have begun to turn up between the Sunshine and Gold coasts. I am planning to go out for a look the second we get a break in the weather.

I haven’t caught either of these species, so I believe it’s time to go and have a crack. This warmer weather means the east Australian current’s northern stream isn’t too far away. This will hopefully bring bulk numbers of pelagics right to our doorstep.

I’d love to pop the Sea Jay Bulldog or Striker’s marlin cherry this southeast Queensland offshore fishing season, as it’s been a long time coming. Until next time, tight lines and sore arms.