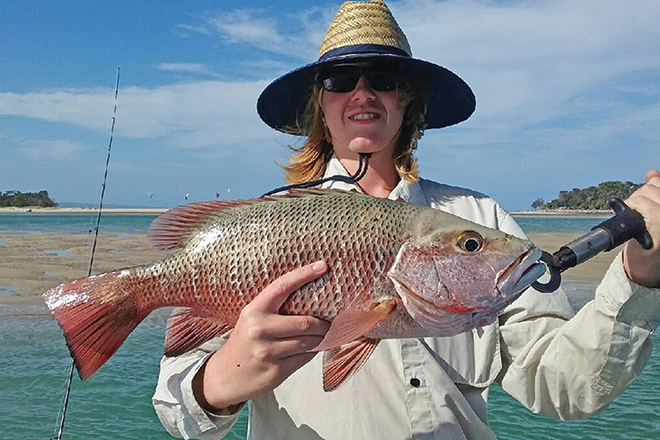 Kye landed this cracker jack over the Christmas holidays.

MARCH is a great month to be on the water in search of a mixed feed southeast Queensland prawns and jacks. The days will get a bit shorter and the temperatures should begin to drop as the month goes on.

Good numbers of banana prawns will be on the cards again this month, with March one of the most productive months of the year.  All the rivers and creeks hold prawns at this time of year.  The best way to find out which ones are prawning better at any given time is to get out there and have a look around.

Serious prawners generally don’t give a lot away, especially when it comes to spots and tides. Getting out on the water and keeping your eyes on the sounder and the other boats is the best way to find out what is happening in your local stream.

Prawns can move very quickly between tides and are excellent at disappearing as soon as the tide reaches a certain level, especially in the shallower creeks.  The deeper rivers tend to hold large schools of prawns for a longer period.

As a general rule, the last half of the run-out tide prawns better than the top half of the tide. This depends on the location and size of the river or creek, but in the larger rivers the prawns normally school up in the deep holes on the bends as the tide bottoms out.

Quite often the prawns will begin to spread out once the tide starts to flood in again. This might not happen straight away and can change from spot to spot. I’ve found the smaller creeks that run off Pumicestone Passage to be very influenced by the first flush of an incoming tide.

These creeks are generally shallower and the holes a lot smaller. Prawns tend to move more quickly in these systems and once they get moving it can be very hard to find them in any great numbers again until the tide drops.

The bigger rivers such as the Brisbane, Pine and Caboolture cop plenty of pressure and continue to produce huge numbers of prawns. The Pine and Caboolture rivers have numerous deep bends that can hold prawns, so a sounder can make finding them much easier. 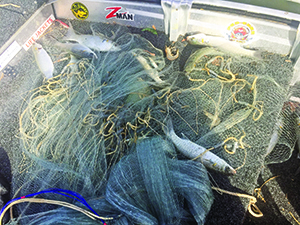 I run a Lowrance HDS-12 on my tinnie and if I can’t see prawns on the down scan, I won’t throw my net. It shows prawns up so well that you can pick and choose the schools that are more dense. Yes, it may sound like cheating, but prawning cuts into my fishing time, so I like to maximise my casts.

I’m not greedy when it comes to prawns and most of the time I’m happy with a kilo or three. If I only have to make a few throws to achieve this, then I’m a satisfied prawner! Good-quality electronics make prawning simple.

An electric motor makes prawning a lot easier and allows you to stay above the net while it sinks to the bottom of the deepest holes. An electric is also handy to move around all the boats when it’s busy to find the better numbers of prawns.

March is a really good month for chasing mangrove jack in southeast Queensland. At this time of year the fish tend to school up at the mouths of larger rivers that are fed directly from the ocean.

The rivers that run off Moreton Bay don’t have the ocean access that places such as Noosa, Mool-oolaba, the Tweed and the Gold Coast Seaway have, so we don’t get the large schools of jacks schooling around here.

No doubt a number of fish move in and out of these rivers to spawn, but I can’t see how they can hold around these river mouths for any decent period before moving offshore. It’s hard to keep track of their movements because they change from year to year and depend on the weather. Most of the larger rivers see big schools of jacks move to the mouths around Christmas and again around April and May.

My mate Nathan and his son Kye took advantage of these movements over the Christmas break, catching good-quality jacks out of a large school of fish during the middle of the day by sinking pilchards into a deep hole in a Sunshine Coast river.

A great effort in a very busy system. This is an excellent month to gather a feed of prawns and hopefully tangle with a mangrove jack. The bottom half of a run-out tide in the afternoon is a perfect recipe for both.