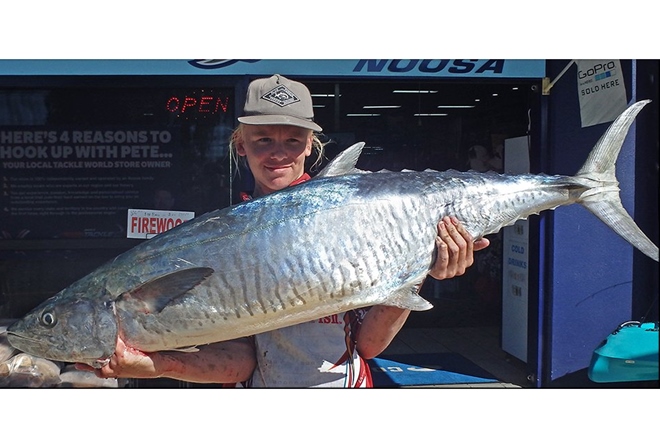 Charlie Boyes fished North Reef on Friday morning. He didn't mention that he caught anything else on the day, but this 19kg Spanish mackerel he's pictured with was big enough to feed the whole neighbourhood anyway. Photo: www.fishingnoosa.com.au

Wind blowing but spanish mackerel around on Sunny Coast

With the wind due to pick up on the weekend many anglers headed out last Friday and early Saturday to take advantage of the better conditions, plenty of angler headed for North reef with some great fish on offer. Cobia, spotty mackerel, spanish mackerel and tuna all hit the decks. Fishing with balloons has become popular for setting live baits at a predictable depth after seeing spanish down deep on the sounder. Free swimming live baits on lightly weighted stinger rigs have been putting the baits right in front of the fish’s face. Up at Double Island Reefs, Spanish mackerel, spotty mackerel, mac tuna & longtail tuna were all very plentiful as well as some great reef dwellers also filling eskies and fish bins.  Metal slugs (Arma Metalik) up to 40g have been working very well on mackerel and tuna. River2sea, Sea Rock 14g slugs have also been matching the hatch perfectly. Another great option has been using stick bait style lures including Shimano Rockslide 120mm, Shimano Ocea 150mm sinking stickbaits and Entice woodpecker 90 & 120mm floating stickbaits pre-rigged with Mustad inline single hooks. Down on Sunshine reef Sweet lip, coral trout, squire have all come from the bottom with pilchard, mullet and squid baits on paternoster rigs good for the reef species.

For the beach anglers the condition were also pretty average with the wind also coming into play. There are some reports of tailor schools starting to move up from the south, pilchards and mullet are the prime baits with the high tide in the evenings the best time to fish. Metal slugs cast into the surf during the day have also seen some good results with trevally and larger dart taken on the turn of the tide. Whiting are in good numbers with plenty of fish taken around Peregian and Marcus beaches, freshly pulled beach worms or pippies have gotten the results. Off the headlands catches of Longtail and mac tuna have been reported as well as mackerel, best results have been on live baits.

The Noosa Rivers has been producing some great fish, trevally and tailor have been in the systems in good numbers, surface poppers and walkers have been the way to go with plenty of fish taken on the morning tide, these predatory fish following in schools of bait in on the tide so areas like Woods Bays, the current line and the mouth of the river have all been prime spots. If you are going to fish the river mouth, have a go with slugs on a fast retrieve, you may also see a queenfish  feeding on those bait schools. Whiting have been in good numbers around the river mouth flats and along Gympie Terrace.  Live worms, yabbies and peeled prawns are the go to bait. Fishing the mid-sections of the Noosa Rivers has also paid dividends, drifting down with the runout tide flicking prawn profile like the very popular Flick Prawn from River2sea and paddle tailed soft plastics like the Keitech Easy Shiners has seen anglers picking up some nice flathead whilst working the drop offs near the sand bars. Heading up river and fishing between the lakes we have seen mangrove jack being taken on a wide range of live and dead baits including mullet strip and prawns. Lures to try are the Samaki thumper soft vibes, Jackall Squirrel 79SP suspending divers as well as slow rolled Gladiator prawns on 20lb fluorocarbon leader

In the fresh Lake McDonald is still fishing well with Bass and small Saratoga around the weed beds and edges. Surface walkers and frog profile lures cast at these areas in the early morning and late afternoon have been productive. Jackson Risk Bait Walkers and the new Dart Magic lure have been good around the bubble trail. Up at Lake Borumba: Saratoga and Bass being caught in on surface walkers and Bassman spinnerbaits. The Kingham Arm seems to be the better option, try Lucky Craft Sammy and Duo Realis Pencils.