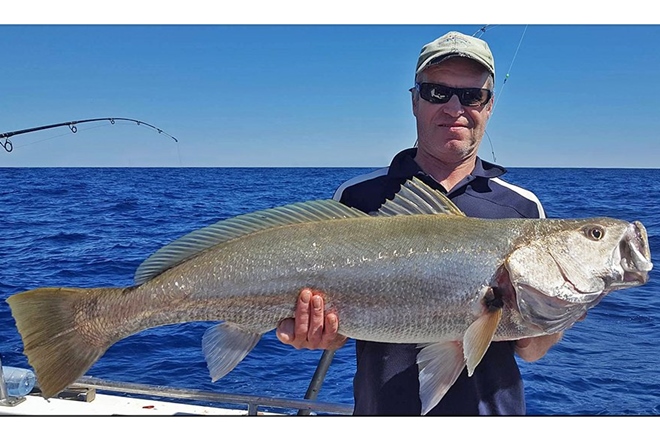 Pictured is Philip Margrave from Adelaide (above) with a quality jewfish. Photo: www.fishingnoosa.com.au

Well spring is finally here and with a bit of luck those winds that have keep a lot of boats close in will abate and let us get out to the reefs. Those anglers that did get out during the lighter wind periods were rewarded with snapper around the 4-6kg range as well as some cracking pearl perch and amberjack fishing wide around the Hards and the Barwon Banks. There are still plenty of 15-20kg Cobia swimming around and these are showing up in all water depths and these respond very well to a mix of plastics, live baits and drifted dead baits.

Everyone’s favourite the silver ghost or jewfish are also making good appearances around North Reef, these fish will happily take a well presented Jerk Shad style plastic such as Chasebaits 7” fork bait and Berkley Gulp Jerk shads in the same size. Presented on a 5/0 or 6/0 Headlock jig head around ¾-1/2oz is best depending on the water depth and current. Sunshine Reef has also been firing with pan sized snapper, Sweetlip and tusk fish all hitting the decks. Fishing live baits hard to the reef has resulted in a couple of good coral trout. There are a lot of reports of pelagic activity starting early this year with plenty of spotted and school mackerel around, those anglers that are fish floaters around the closer reefs have been picking them up. Tuna are also in the mix with a couple of long tails taken on fast moving plastics.

The last week has seen plenty of quality whiting taken in the lower reaches of the Noosa River, the Dog Beach, along Gympie Terrace and around the flats of the Frying Pan and Lake Weyba. The fish are in good numbers and have been responding to a wide range of fresh baits including yabbies and worm. Surface fishing for big Whiting is great fun and if you have good condition like a slight breeze and a rising tide the larger fish will come up on to the banks to feed, a couple of very popular lures have been the Strada Viral and Jackson Ebi Panic prawn lure. There are good numbers of bigger Flathead In the lower estuary around the 55-85cm mark so it’s important to step up your leader or use a bite leader if you are losing them.

The bigger fish are falling to a range of trolled lures, soft plastics and strip baits fished on small gang hooks. Try using paddle tail plastics in the 3” size and 1/4oz jigheads to ensure you stay at the correct water depth. The Entice 4” Paddler range has been working very well so be sure to take a look at these when next in. Micro jigs have been working very well on the Trevally and we have seen some big Diamond, Cale Cale and Golden Trevally getting caught in the lower part of the river. These fish are a sucker for small micro jigs and the best have to be 3g and 6g Blue Blue jigs. These belly weighted jigs have an attractive slow fall action and of course create little puffs of sand when they land which always creates interest. Mangrove Jacks are also starting to come on line with most fish taken at night with live baits, Tewantin Harbour is one of the hot spots along with the many pontoons around the Noosa Sound.

On the Beaches; plenty of anglers headed up the beach on Noosa’s North Shore in search of Tailor. The reports have featured a few decent fish getting caught north of Teewah, smaller choppers have also been taken around the first cutting and back towards the mouth. Great numbers of Whiting, Bream and Dart have also been taken from the gutters around Marcus Sunshine and Peregian Beaches.  The beaches are teaming with beach worms at the moment so come in and grab yourself some worming plyers and give it a go.

With the end of the restrictions on Australian Bass in tidal waters anglers will be heading to the upper reaches of the rivers systems in search of fish, these fish have recently spawned so they will be looking to put on condition and feeding hard. Some great options for targeting bass is on soft plastics in the 2.5-3” sizes. Take a look at Keitech Mad Wags, Zman Grubz and Chasebaits Curly baits.  Suspending divers cast in close to structure may also get a strike, check out the  Jackall Squirrels and OSP Dunk divers for a couple of consistent performers.