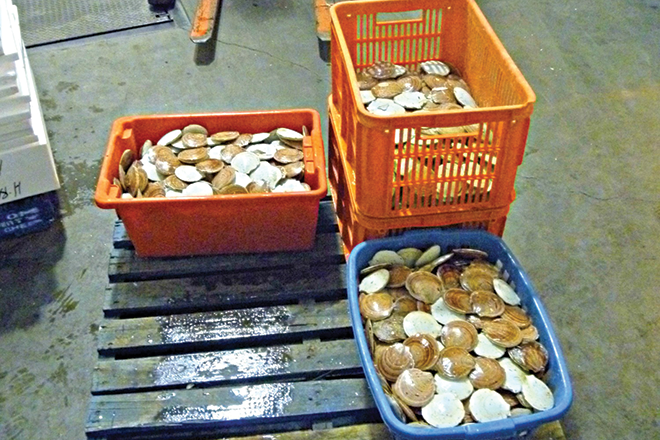 A URANGAN commercial fisher has been fined $12,000 plus court costs for possessing undersize scallops, with $38,480 forfeited from the proceeds of the sale of the seized catch.

Queensland Boating and Fisheries Patrol district manager Greg Bowness said an inspection of the trawler in January found more than 20 percent of the fisher’s catch was undersized.

“The entire load of scallops caught off Yeppoon was seized, weighing in at 8540kg at $4.50 per kilogram shell price,” Mr Bowness said.  “The taking of illegal scallops is a threat to the ongoing sustainability of the fishery. “Scallops are an important part of the east-coast trawl fishery and any undersized scallop that is gathered must be immediately returned to the water.”

Mr Bowness said the fisher pleaded guilty in the Hervey Bay Magistrates’ Court to possessing illegal fish. “The penalty reflects the seriousness of the offence, and the need for fishers to accurately measure their product to protect stocks,” he said. “QBFP will continue to conduct patrols and routine checks throughout the central Queensland area.”

If anyone suspects illegal fishing, they should report it to the Fishwatch hotline on 1800 017 116 but refrain from engaging the person because it could compromise an investigation. For more information on Queensland’s fishing rules, visit www.fisheries.qld.gov.au, call 13 25 23 or download the free Qld Fishing smartphone app from Apple and Google app stores.