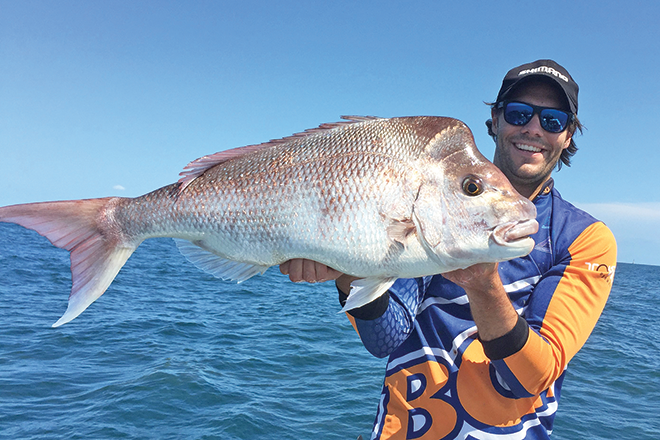 The author with a brute of a bay snapper.

Boat traffic, consistent fishing pressure, frequent northerly wind and the sheer size of Moreton Bay means most anglers, including myself, have a love/hate relationship with Brisbane’s local waterway. Anyone who has fished the bay will know that to be successful, you need plenty of patience in your tackle bag.

However, the sheer challenge of finding quality fish in the bay and then catching them makes it all the more rewarding when that trophy fish or red-hot session comes along. If there is a time in which to focus your efforts on Moreton Bay, it’s summertime. As the annual run of pelagic species such as tuna, mackerel, marlin and dolphinfish make their way down the east coast, Moreton Bay comes to life with big schools of bait and even bigger predators.

Obviously, you’re unlikely to encounter the larger pelagic species including marlin and dolphinfish in the bay but several mackerel and tuna species, as well as cobia and kingfish, are very realistic targets during the warmer months. Find the bait and you will surely find the fish. No truer statement applies to fishing Moreton Bay.

Catching trophy fish offshore can often be about finding structure and significant reef systems that house large numbers of fish. In the bay, structure such as reef, wrecks, rocks and drop-offs all exist, but unless they hold a significant amount of bait, you’ll find it difficult to nail quality fish on a regular basis. My theory is that fish are constantly on the move in the bay.
For pelagic feeders, that makes total sense, but I believe even snapper and sweetlip tend to hunt in areas where bait is in abundance. If it isn’t, they’ll move on.

A great example of this is the brilliant run of snapper in shallow water that we experienced in the northern bay in 2011/12 as the system recovered from the floods. Snapper have always been caught in the northern bay shallows and will continue to be captured in that area but it is rare to have a season where double figures of quality snapper was the norm for a session.

Also abnormal for that season was the number of big, often unstoppable snapper encountered. I believe the abundance of bait and nutrients exiting the river systems, coupled with the significantly reduced fishing pressure (during and straight after the floods), was the primary reason for those fish being there. With that theory in mind, it’s important to pinpoint the areas of the bay that hold an abundance of bait at any given time. A reliable starting point is the many shipping channel markers that line the deeper channels.

Those located on the Tangalooma side of the bay are renowned for holding bait and large packs of school and spotted mackerel. Both those mackerel species cannot resist lures retrieved at speed. Use your sounder to locate the bait or feeding school, or look for bait being harassed on the surface and work those areas with a mixture of metal lures, plastics, stickbaits and poppers. Whatever your weapon of choice, work it quickly!

The humble metal slug or slice is just about the best option. It can be fished along the top of the water column or allowed to sink quickly to the bottom and cranked quickly back to the boat. Most brands of metal lures will work well but the profile and weight of your lure is important. Matching the profile of bait in the area is your first priority, closely followed by choosing a lure weight that is heavy enough to cast to the feeding school or drop to the bottom and quickly retrieve.

On a recent trip, the ever-reliable Gillies 40g Pilchard found its rear treble constantly connected to members of Moreton Bay’s school mackerel population. The technique that day was simple, and typical of mackerel fishing in the bay. Approach one of the shipping channel markers, locate the bait, use your electric motor to sit above the school, drop the lure to the bottom and retrieve it as fast as possible.

The ‘as fast as possible’ bit is made a lot easier by using a high-speed retrieve spin reel. Anything with a retrieve ratio above 6:1 is perfect and the larger your spool size, the greater the length of line retrieved on each crank of the handle. If you’re fishing with a mate and he or she is out-fishing you by five or six to one, chances are he or she is using a higher-speed reel. One of the great things about a quick retrieve is nearly every time, the predatory fish will be required to chase the lure and attack it from behind.

That’s when a rear treble or single hook will do the rest. The single versus treble debate is an interesting one. Despite having razor-sharp teeth, mackerel have relatively soft mouths, so making sure your drag isn’t set too tight will go a long way to ensuring you stay connected no matter what type of hook you’re using. Eaten fresh, schoolies and spotties are actually hard to top.

They’re not a great table fish once frozen though, so only keep what you intend to eat fresh, or get some brownie points with the rellies by sharing your catch rather than throwing it in the deep freeze. While fishing the Moreton Bay beacons or channel markers, it always pays to jig a few live baits as well. Deploying a live yakka or slimy right there where you caught it can also reap rewards, with big cobia in particular known for frequenting the beacons and gorging on bait.

Having live baits in the boat is a big positive if you’re going to chase a feed of reef fish in the bay as well.

The abundance of bait in Moreton Bay over summer means it’s a great time to target bottom dwellers.

Grass sweetlip, moses perch, cod and snapper are all mainstays in Moreton Bay and somewhat surprisingly, a lot of the gun bay snapper anglers swear that summer is the best time to catch a big Moreton Bay knobby.

Fresh or live bait, like with most offshore fishing, is the key. Natural baits such as yakkas, pike, slimies and pilchards work really well, as do flesh baits including mullet, tailor and squid. Again, look for areas where bait is in abundance. A bit of structure on the bottom will also help, but in the bay you may only need a rock the size of a car or a bit of weed or rubble on the bottom to catch a few.

Try to finesse your bait into the strike zone. The fishing pressure Moreton Bay cops means a double paternoster with a huge snapper lead sent cannoning to the bottom will rarely entice a bite from anything worthwhile. Fish a light sinker with a single hook and light leader. The majority of reef fish you’ll target aren’t huge but some big, ugly cod and snapper are lurking in the bay and often don’t mind a smaller snack.

Those big cod absolutely love a live bait too, but they’ll pull hard so be ready for the battle before you deploy that live yakka. After a recent really good day on the school mackerel and sweetlip, we decided to pull up to one last patch of rubble that had produced quality fish in the past. We fished it the same way as we’d fished the bottom all day; with small flesh baits on a single 5/0 hook and a size 4 or 5 ball sinker.

We were using 4000 size spin setups with 20lb braid and 25lb fluorocarbon leader and had a ball on the grassies, which pulled pretty hard for their size. The typical afternoon northerly had started to puff as we drifted our last spot catching a few undersize squire and grassies. My mate Ross was suddenly hit hard and line began peeling from the reel before his braid gave way a long way from his leader knot.

It was a disappointing result but one that was unavoidable and I didn’t think too much of it at the time given it may have been anything from a big cod to a shark, tuna, cobia … anything. As Ross was re-rigging I received a similar thumping as something nailed my flesh bait and took off on a blistering 50-60m run. I honestly wasn’t too perturbed and was just enjoying the serious bend in the rod and hoping for maybe a cobia or longtail tuna to surface at some stage.

Anything but a shark was the best I was hoping for and given the light gear, I wasn’t even too confident of landing the thing. There was serious weight but midway through the fight, the fish didn’t seem to get a second wind, occasionally pulling string but not taking off on another blistering run like a pelagic or shark would. At no stage was I really thinking that it might be a ‘quality fish’ until we got a glimpse of the pink and white silhouette coming up from the deep.

Big snapper! For someone who was just enjoying the bend in the rod for the preceding five minutes, I quickly crapped myself and was suddenly stressing out big time because a cracking bay snapper was within reach. Despite a few small issues with my sinker being caught on my leader knot, the donkey snapper eventually made it safely into the net and onto the boat. What a day in the bay!

A big, fat, well-conditioned Moreton Bay snapper was on the deck in bright, mid-afternoon summer sunshine. How good is Moreton Bay!? Well, on that particular day it was. The thing that made that day and that fish all the more special were the countless tough days out there. Targeting snapper and coming up empty. Sounding for new ground and coming up empty. All the days with great shows on the sounder but everything shut down.

Hooking quality fish and losing them to tackle failure, bust-offs or just bad luck. Those are the days that culminate into the special moments that keep us coming back for more. Incidentally, this was my first big snapper from the bay in quite some time and weight wise, it was a Moreton Bay PB that tipped the scales at a tick under 8kg. My mate Ross was suddenly thinking what might have been if his braid hadn’t given way.
But again, it’s all part of fishing the bay. The lows make the highs that much more special.
Catch ya!

Chris grew up in southeast Queensland and chases everything from whiting and flathead to red emperor and snapper. Over the past few years Chris’s keenness for offshore reef fishing has grown into a passion. You might also catch Chris gracing your TV screens as a regular on Channel Seven’s Creek to Coast program.
Previous Quintrex Yellowfin 5800
Next Update on white spot disease in SEQ