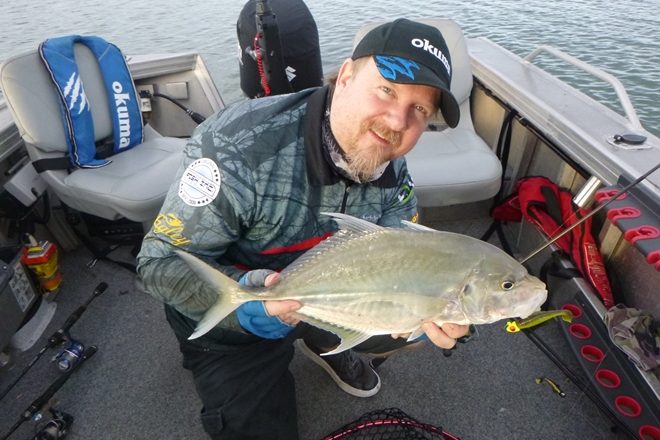 Plenty of trevally of all types are landed throughout summer. Keep an eye out for bait being harassed.

WITH the warmer weather many anglers turn their attention to mangrove jack. In fact, for many it becomes a seasonal obsession. Much is written about mangrove jack during warmer months, so I thought I would cover a few other favourite fish that can be caught in the systems I frequent, while also covering the areas that attract these species and how I target them. Summer species

Grunter or javelin fish are a very popular northern species that tend to make an appearance around southeast Queensland and even further south as the weather warms up. As they become more active and appear in larger numbers, they definitely become a viable target species.Summer species

The key to targeting these fish is weed and rubble flats, whether fishing on the flats during higher stages of a tide or along the deeper edges on the lower stages of a tide. Good advice from a friend of mine in far north Queensland is that grunter are the last fish on the flats and first fish off during a high tide.

This has proven true time and again. Targeting mangrove edges and weed flats on the end of a run-in tide and start of a run-out has produced 35-50cm fish, along with a 70cm beast landed by a friend.Summer species

If you can line up this tide period with an early morning or late afternoon, even better. Water colour and clarity can turn off several fish species, however I have sight cast grunter in crystal clear water and also landed them when water had washed hard onto the flat, turning it almost to mud.

Average-sized grunter aren’t really built for eating giant plastics, and I’ve had the bulk of my success rolling and hopping Z-Man 2.5” GrubZ and 2.5” Slim SwimZ across weed, rubble flats and down drop-offs on the lower stages of a tide.Summer species

I often rig with a 1/4oz 1/0 TT Lures jig head and fish quite fast, however if you prefer a slower presentation you could drop to a 1/8oz jig head. When winding your plastic across flats, I’ve found that continuing the retrieve after a bite should see the fish continue biting until they find the hook.

Grunter often travel in schools, so if you land one keep working the area, reducing noise and disturbance to a minimum because they spook easily. It’s also important to be able to identify the difference between a barred and spotted grunter, especially if you are keeping fish for a feed, as they have different legal sizing.

I am yet to catch a monster jewfish, however in recent years I’ve spent more time targeting school jewfish with reasonable consistency. The lack of jewfish landed in the past was thanks to my obsession with flathead and the fact that I rarely fished deeper than 1.5m of water.Summer species

I’m not saying you won’t catch them in shallow water, especially if there’s plenty of bait around, but most fish have come from deeper water in my local systems, ranging from 3-9m depths. The prime time to target jew on soft plastics is early morning and late afternoon, particularly if there’s minimal boat traffic in the area.

Dramatically increasing your chances of catching fish is if plenty of bait is around. After rain, jewies are commonly found closer to mouths of rivers and estuaries. While following sustained periods of no rain, they will push further up into systems, holding on deep structure and in deeper holes of rivers and creeks.Summer species

Jew love structure such as bridges and artificial lighting can make them a viable night target with soft plastics, mainly when mullet schools are around. I prefer to target jewfish using paddle tail plastics because they prefer eating mullet. I will start with a Z-Man 3” MinnowZ because this will also land plenty of flathead and other species, stepping up to larger SwimmerZ and DieZel MinnowZ as focus develops more on jew.Summer species

I tend to rig the 3” MinnowZ on a 3/8oz 3/0 TT Lures Big EyeZ jig head, make a long cast, allow it to sink to the bottom and then fish it back with a two or three hop retrieve, allowing it to hit the bottom after each set of hops. Bites can be as subtle as a bream bite and often on the sink, so set the hook if you feel a tap.

Trevally are one of my favourite species and is available year-round, but in southeast Queensland rivers and estuaries we tend to catch larger fish in numbers during warmer months. Species include giant, golden and bigeye trevally, with other species mixed in.Summer species

Trevally will usually be where you find them, meaning they are highly mobile and on the move frequently. However, they prefer structure, water movement and bait, making bridges, rock walls, deep structure and mangrove edges a few favourite hunting grounds.

Keep an eye and ear out, as many trevally are caught casting to bust-ups and disturbances around bait, often when the focus is on other species such as flathead and jewfish. They also don’t usually hang around for long before continuing on their bait-destroying journey, so if you see signs of them stirring up bait, get a cast in there.

On the flats I have caught most fish on a Z-Man 2.5” or 3” Slim SwimZ, and 3” MinnowZ are the go-to for deeper edges. When targeting deeper structure and bait in around 3-9m, I run a Z-Man 4” Scented Jerk ShadZ rigged on a 3/8oz or 1/2oz 4/0 TT Lures HeadlockZ HD jig head.Summer species

With this latter setup, the cool thing is the number of snapper, jewfish, flathead and other species that also love to eat this presentation. The Jerk ShadZ rig is an excellent option in windy conditions, and when fishing deeper water and heavier currents, as minimal built-in action means less drag for a longer cast and faster sink rate.Summer species

So, get out there and get stuck into a few jacks. But don’t forget, if you can’t get them to bite, there are other cool species that will be looking to eat your plastics during summer and all of them will put a bend in the rod.

See you on the water…

Previous Seizure of nearly 2500 cockles
Next La Nina shines on