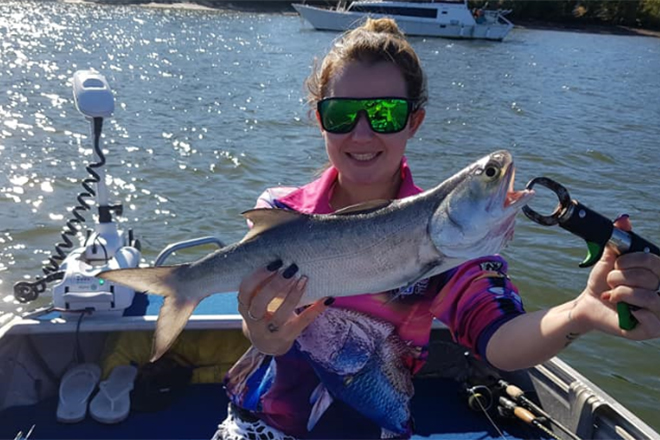 Sunday best for fishing around Bundy

BUNDABERG OFFSHORE
Looking into the weekend’s forecast for the Bundaberg area, it looks okay for offshore at present with Sunday looking to be the best of the two days. As always, check the forecast before you head off. We were lucky enough to have a few good days earlier in the week. This allowed a few to head offshore. Most of the gutters produced a mix of parrot, hussar and some monster grass sweetlip. Further out, the Warregoes and Herald Patches produced some red emperor, coral trout and big red throat emperor. There has been a few cobia and Spanish mackerel about as well.

INSHORE REEFS
Both the Two Mile and the Cochrane Artificial reef have produced some big grunter and squire. There has been no reports of any really big snapper yet, but they can’t be too far away. Most of the grunter and small snapper have been caught on lightly-weighted baits and soft plastics. Some of the better baits have been strips of mullet fillets or larger whole squid.

THE BURNETT RIVER
The Burnett continues to produce some fantastic fishing with plenty of grunter and flathead about. Most of these fish have been caught on the run-out tide in vibe-style lures or 4” to 5” soft plastics. There is still plenty of bream about and over the past week we have seen a few jacks caught as well. There is still some blue salmon about. They’re a bit tricky to catch and soft vibes are still a go-to lure, but try a faster retrieve. A few mud crabs have started to move about and will be worth a go.

ELLIOTT RIVER
There is plenty of whiting and dart around the mouth of the Elliott and along the beach with the evening making tides being best. A few flathead, cod and an odd jack have been caught on live baits in the deeper holes.

BAFFLE CREEK AND THE KOLAN RIVER
There has been a run of sand whiting along the sand flats in these systems, as well as a few nice flathead. Run-in tides seem to be best. Some of the deeper channels have plenty of grunter in them, but please be aware of the current Queensland Fisheries size and bag limits for the grunter. There is still plenty of small GTs and queenfish about the mouths, so if throwing lures is your thing, they are great fun to catch.

LAKE MONDURAN
Some warmer weather last week got the barra on the chew with good sized barra being caught all over the dam. Barra up to 90cm have been reported. Most of them have been caught on 4” Zman Swimmerz or 20gr soft vibes with both the Jackall and Samaki Vibes being stand-outs.