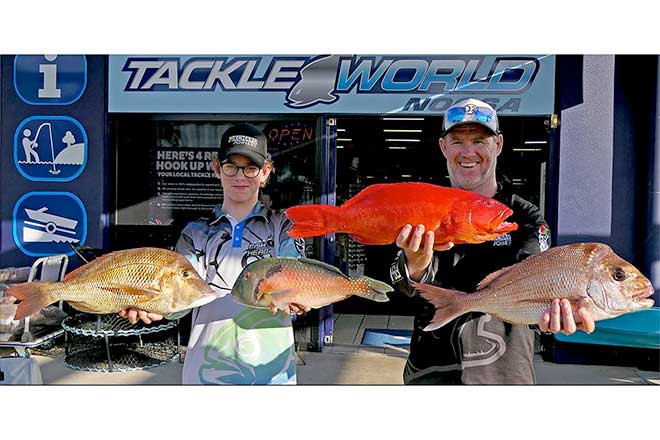 Light winds and low swells has seen the coast light up with boats headed far and wide with all anglers grabbing a feed of reef and pelagic species. In close Halls Reef directly off Noosa has been producing some cracking longtail tuna. These fish have been taking a mix of floated dead baits like pilchard and slimy mackerel on gang hooks and allowed to float lightly in the drift. To add a little extra sparkle grab a pack of sea horse tinsel heads and sit one of these above your first hook. For leader there really is no need to go heavier than 30lb which will present your bait the best possible way. There are still some big Spanish about and you can go heavier but they will bite through 300lb as if it were 30lb so keep leaders light for the bite. Elsewhere on the reefs Sunshine has been producing some really nice sweetlip and tuskies along with the occasional pelagic. The lead up to the full moon should see a strong afternoon/evening bite.

The big snapper are still yet to arrive in close, but with a more stable weather system over the east coast and the cooler water temps they should not be too far off. They are out wide around Barwon Banks and the Hards and beyond. For the lure fisherman be sure to have soft plastics and slow fall jigs ready to go. Curly tail grubs in the 4-9 inch size lightly rigged and allow to slowly fall downward are a huge hit for snapper. Do not go heavy and see the difference it makes. Double Island is a great option for those with long range fuel tanks and reports of good sized amber jack, cobia, jew, Spanish mackerel as well as good reefies always make this a great destination. If heading out under the cover of darkness be aware that there are whales around so take care and be aware.

Surf fishing and rock fishing has been pretty consistent with the drop in swell. Small kingies have been further south around Yaroomba along with a few jewies and sweetlip. In closer to home the headlands of Noosa have small snapper with a few reaching legal size and of course small trevally and bream with dart and whiting making up the catch for those off the beaches. Further north toward Teewah tailor have been showing up so break out the gangs and whole pillies. Again beach fishing for whiting, dart and bream only needs a simple running sinker rig for most of these fish. Elsewhere the tailor are sporadic and have turned up in the surf when chasing bait balls. Look out for birds diving and have a 30-40 gram slug ready to cast.

Estuaries have been fishing with great variety of trevally, flatties, bream, whiting and the occasional winter jack. For those chasing whiting, bream and flatties concentrate your efforts around the river mouth rock wall, the dog beach and the frying pan if in a boat. Best bait would have to be live beach worm and peeled prawn baits with larger whole froggies on light gang hooks for flatties. For those using lures then small surface walkers on 6lb gear is a great way to target these fish. Bassday Sugapens in the smaller sizes are a great go to lure. In the frying pan and woods bay you can also expect to find a few tailor and possibly a queenfish around the dog beach and woods bay areas. Mangrove jacks are hanging out along the ski run and around Noosa Marina. For these fish, live baits are one of the best ways to get them as are prawn imitation lures like the squidgy prawn and curly tail grubs in bloodworm colours.

Freshwater has been quieter, however flicking the edges with stealth and persistence has produced some fat winter saratoga and bass. Suspending hardbodies like the jackall squirrel and lucky craft pointers are 2 must have lures. For these fish it is worth upping leaders to 14lb as you are getting your lure deep into the timber and this is where the fish will run. Those anglers with baitcast combos will be able to get on top of these fish quickly which is paramount when snag bashing. With the drop in winds and slightly warmer daytime temperatures the waters will have warmed a degree or two making now a great time to hit the local dams.