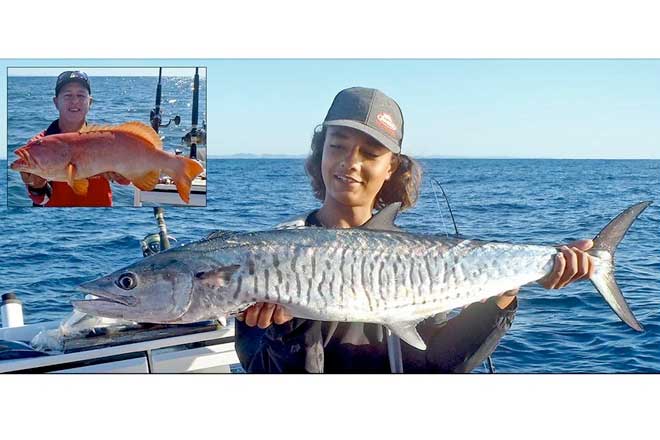 Young Dory was aboard and claimed his first Spanish and I weighed in a solid trout for the Davo's Social Competition. Conditions were calm with the swell just under a metre. Cheers, Chicko. Photo: www.fishingnoosa.com.au

With the Easter break now gone we finally saw some good weather on Friday and first thing Saturday morning before the dominant South Easterly winds kicked in again. The swells dropped off enough to allow anglers a chance to get offshore especially through Mooloolaba and stuck into some longtail and mac tuna action. There were also some big Spanish mackerel boated as well as smaller squire, sweetlip and pearl perch. The longtail tuna were of course hard to approach but the smallest of well-placed slugs got anglers into the action with light fluorocarbon leaders and 15-20lb braid. With the lighter current and winds some anglers made the most of the conditions and drifted while light jigging and casting soft plastics on 3/8th-3/4oz jigheads with 4-5 inch sized jerk shad and paddle tails. A couple of smaller coral trout were also landed on live baits around sunshine with most reefies getting caught on paternoster rigs. This is the time of year where we can start to see a few changes ahead with dropping winds and swell and a great mix of summer and winter species coming in so be sure to be rigged to fish for both mackerel and tuna along with snapper and jewies.

The Noosa River has certainly changed colour these past few weeks with it holding a lot of fresh water and heavy sediment from all the run off. If you are going to fish the estuary then you would be best to concentrate your efforts in the lower areas to avoid catfish that can be in plague proportions further up river. Best baits on light running sinker rigs would be fresh mullet strip and whitebait on small gang hooks for flathead and golden trevally. The early morning high tides around woods bay and the current line would be the best option if still wanting to throw surface lures for gt and tailor. As we push toward cooler conditions you would be best to fish sub surface lures like the Westin Swim and small Nomad Madscad. Whiting will be holding along the drop offs of Gympie Terrace, the river mouth and along the beaches where the salinity content is higher. Fresh beach worms and yabbies are going to be the better options. Don’t forget if targeting these fish to keep you need to be able to identify winter and summer whiting as summer whiting have size and bag limits to adhere to. So far April has been the best month for catching mud crabs with some huge males caught in all river systems. Come in and take a look at the various pot options we have and ask about our special deals.

Surf fishing has slightly improved with some good gutters all along the coast line. On dedicated surf rods and bigger reels then bigger dart have been found feeding around the last breaker whereas the smaller fish are found in closer. These fish have been taking prawn baits and mullet chunks. Larger bream have started to show up around rocky outcrops of the headlands and middle groyne with a few reaching the magic 40cm mark. These fish are very old and only photos should be taken with the fish released to breed. Whiting are also around and provide fun for any anglers on lighter estuary gear. Again like the estuary fish they prefer live beach worm and yabbie baits. Be sure to come in and grab a bait bag and some mullet and give worming a try for yourself.

The freshwater is still providing anglers with solid sized bass and the occasional saratoga in both Lake MacDonald and Lake Borumba. Fishing surface has certainly slowed this month with fish now taking sub surface lures and hardbodies like the famous Jackall Squirrel a go to option for both species. Sounding around will show you the bass and then the trick is getting them to bite. If dropping straight down to fish on the bottom then micro jigs like the Majorcraft Jig Para is a great option that you can wave about in their face which will often trigger a bite.