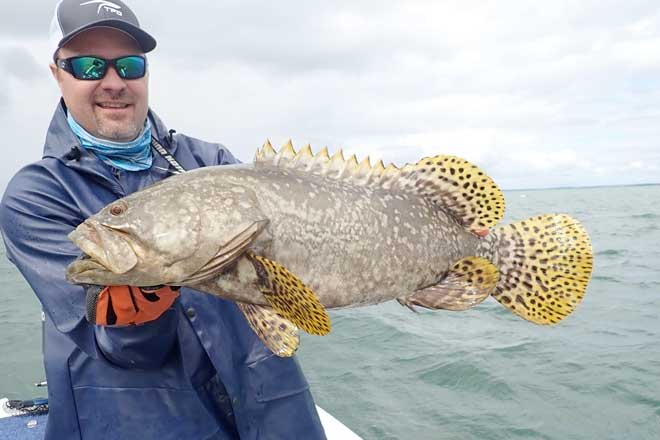 I THINK most anglers do a lot of the same style of fishing over and over because they know it and most times have success doing what they are familiar with.

Having success with something different can be a real buzz, whether it’s a new lure, style of fishing or in the case of this article, new location. When fishing a new area, it’s worth doing some homework before heading off. Thinking about simple things like wind direction, tide direction and depth changes will help when travelling around as well as finding fish.

These days we have it pretty easy with things like satellite maps to give us an idea of where we are going before leaving, and modern sounders to help navigate on the water and of course find the fish. Recently I did a bit of homework and headed off to a new area to try to find fish that are not common in Brisbane. The plan was to fish some ledges and creek mouths up north for a day and a half in the hope of finding larger estuary species such as threadfin and barra as well as pelagics like trevally and queenfish.

We headed off around 6am on the first morning and were greeted by a stiff south to southwesterly wind, which was supposed to be a southeasterly. This would prove to be a pain and spoil most areas that would have been protected if the forecast was correct, so that side of the planning was thrown out the window. I pulled up on the first location and in no time at all a solid school of pelagic-type fish were found on the Simrad sounder.

Unfortunately, this area was very hard to fish because the wind and tide were going in opposite directions and the fish were moving around, so despite the showing of big fish, we had to leave to find protection. It was one of those days where the wind was up and down as rain moved through, which isn’t a heap of fun but when you travel a long way to fish, you just have to deal with what you have been dealt.

The next location was a really nice ledge where the depth dropped off very quickly, which is a great structure for fish to travel along. We fished this ledge with soft vibes (Jackall Transams and Zerek Fish Traps) on heavy baitcast tackle, casting the lures up on the shallow part and hopping them down to the deep. The first fish ate the lure as it fell down the face of the ledge, and it was a cracker, taking massive, super-fast runs. Eventually a massive blue salmon came to the boat and it would have measured a metre or more but the lure got hooked on the outside of the net and the fish didn’t make it into the boat for a photo.

The next fish ate the lure in a similar fashion and was clearly a different species because it was determined to get back into the ledge. I put the wood on it with my Dobyns 10-20lb rod and was able to turn and steer a 70cm Queensland groper into the net. These fish are protected, so we swiftly removed the lure from inside its mouth and got a quick picture before releasing it back to its ledge.

This was a great start to the trip but the brake went on from there and we did it tough for a long time. We tried creek mouths and more ledges but could only manage a few small fish like cod. On the way back I decided to have a look at the first spot we stopped at because the current was running the opposite way, so the wind was going with it and as a result it wasn’t as rough.

I pulled up a long way short of where I marked fish earlier, and we would have sounded for 20m before my Simrad showed good numbers of big fish close to the bottom. The first fish hooked revealed itself quickly as a donkey-sized giant herring, clearing the water with Damien’s Fish Trap in its mouth. He was pretty keen on landing this one because it would easily be a PB and his first fish for the day.

After an epic battle from this crazy, fast-running acrobatic fish, a 116cm specimen was netted. From here we both caught a number of big herring, all easily over 1m, on Molix RT Shad plastics fished on heavy leaders of 30-40lb Sunline FC 100, as these fish can rub through leader easily with their hard mouths and gill-shaking jumps. I did manage a big lone golden trevally in between the herring, which added to the great bag of sportfish encountered in a day’s exploring.

The next day we fished an area we had targeted many times before and though not as rewarding as fishing something new, it was good enjoying some easy fishing. Excellent numbers of sizeable diamond trevally and queenfish were caught with Molix RT Shads cast to fish located on the sounder. Both species are excellent fighters and prized sportfishing captures in this part of the country.

Fishing new areas can be productive and when they are, it is very rewarding!

Peter Herbst has 30 years of fishing experience around SE QLD. Everything from whiting to marlin has been a target at some stage but these days Peter enjoys nothing more than casting lures.
Previous Sunshine Coast anglers get stuck into pelagic action
Next Benefits of eating fish