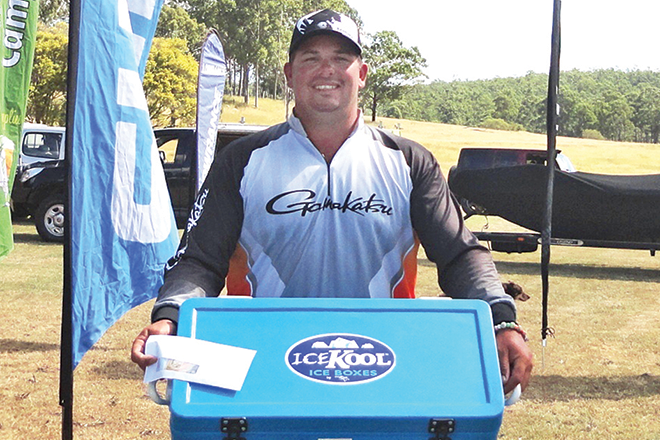 Terry Allwood was the winner of round two at Cania Dam and also picked up the Big Bass prize.

TERRY Allwood of Wondai put on a great display of angling skills to win for the second time this season at round two of the Basstasstic qualifying series held at Cania Dam.

He won at Boondooma Dam in round one and stormed home with the win this time around. On the Friday pre-fish, he didn’t land a single fish. He was expecting disaster but put his mind to the job of finding fish and landed two good bass in each of the three sessions over the weekend, beating 46 anglers to win the event.

His scores were 830 points in session one, 810 in session two and 784 in session three, which gave him 2424 points to take the win. The weekend proved tough for most anglers, so it was a really good effort to claim back-to-back victories.

Terry also won the Evakool Big Bass prize and cash pool with a 437mm to the fork Cania bass.
Overall, he took home $1460 in prizemoney. His closest rival on the weekend was Matthew Langford of Kingaroy who came second with 2381 points.

Matthew put in a huge effort for this result, as it was a tough fish for all 47 anglers, and he was rewarded with $700 cash.

Third place went to Barry Reynolds of Nambour.Barry had a great weekend with three good measure-ins to finish with 2343 points. He walked away with $500 cash for his efforts.

Junior winner Emma Wojtasik of Nambour had a really good score of 1731 points and won the Bill and Cindy Schloss donated prize of a pack of lures.