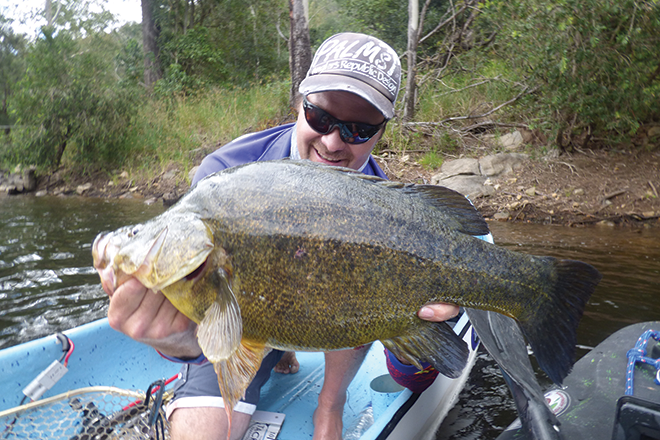 The fish of the day was this big 60cm golden perch.

SCHOOL holidays had put the brakes on my fishing over December and January, and when February rolled around, I was fairly keen to spend time on the water and try to catch a few fish. I was able to put some days together mid-week, but huge tides and the continuing strong southeasterly wind limited my options.

The idea of freshwater fishing popped into my mind because fishing the fresh would somewhat get me out of the wind, the tides would have no effect and I had new lures I wanted to play with as well.

My mate Wes had been having success fishing for bass and golden perch and was kind enough to give me a heads up on where to go. Wes had time off as well, so we planned to meet up on the water for a few hours of fishing. I was more than keen to do this because local knowledge is a big asset in terms of finding successful locations and choosing the right techniques.

With directions from Wes, I got the canoe unloaded at about 5.30am and started prospecting until Wes was due to arrive at roughly 7am. I hadn’t used my canoe for quite a while and found that my sounder was not working (flat battery), so I did some blind casting in the deep with plastics and worked snags with hard-bodies. After prospecting with a Keitech Easy Shiner and 1/4oz TT HeadlockZ jig head, I started getting a few hits while slow rolling the plastic off the bottom.

Several missed hits later, I finally hooked up on the first fish for the day: a small bass. Considering the number of hits I received, I figured a reasonable school was in the area, so I positioned the canoe with the Minn Kota electric and worked the area with the plastic and a 1/4oz TT Switchblade. The bass must have been sitting a fair distance off the bottom because they wouldn’t hit the blade when I hopped it along the bottom, but would smash it on a slow constant retrieve.

I was able to bring five bass to the boat in fairly quick time before the school stopped biting. I then tied on an Imakatsu Piranha Vibe because it was heavy enough to stay at the depth I wanted while being retrieved at a moderate pace, allowing me to cover plenty of water quickly. It didn’t take too long to hook up and after a good fight I landed my first golden perch for the day; a solid fish in the 40-45cm range and very thick through the body.

I continued fishing and picked up another golden and a solid bass before Wes arrived. Even though I had been successful doing my own thing, Wes had a lot of experience fishing this area and I was keen to learn from him.

Wes had worked out a couple of areas that had big numbers of golden perch moving through. He had also been having good success on a range of lure types and particularly enjoyed fishing diving hard-bodies.

I started fishing the area with tailspinners and began hooking good-sized goldens one after another. This was great fishing but a number of snags on the bottom liked stealing my tail spinners. Wes was into the fish using tailspinners as well but then changed to diving hard-bodies to try to avoid snagging up. Wes’s hard-bodies were getting plenty of follows but on this day the fish were only taking lures that ran fairly close to the bottom.

With a few fish under my belt, I started trying a couple of lures I had wanted to use for some time to see if the fish liked them as much as I did. The Imakatsu Alive Chatter and Jackall Vector Jig have very different actions and required different techniques to get the fish to bite. The Alive Chatter is kind of a cross between a lipless crankbait and a chatter bait.

It has an awesome wobbling action on a constant slow retrieve that sends out heaps of vibration and flash. It attracted the larger fish in the school and claimed the fish of the day; a cracking 60cm golden perch that was easily my biggest ever. Unfortunately I lost the lure not long after when another cracker fish nailed it and smashed me back into the snags. The Jackall Vector Jig is a small skirted jig that has been very popular overseas for a long time on species including largemouth bass, but it is only new to Australian tackle shops.

I tied on a 3” Keitech Live Impact soft plastic as a trailer and hopped it through the snags with confidence because the Vector Jig has a wire weed guard to prevent snagging up. This combo too was a hit with the goldens, bagging plenty of fish before it met the same fate as the Alive Chatter. I worked the jig by giving it a few hops off the bottom and then letting it sink back.

All hits came as the lure sank back down. Lots of other lures caught fish on the day but these two were by far the standouts and will certainly be replaced before hitting the water again. We continued to catch fish all day, occasionally changing lures when the fish would go quiet to show them something different. Regardless of what lure was used, most fish were hooked close to the bottom, so the majority of lures were rolled a couple of metres off the bottom and then free spooled back.

This was repeated until the lure was back to the canoe or a fish was hooked. In the end we had to leave the fish biting because I had to do the school pick-up. However I wasn’t too upset because it was one of the best freshwater sessions I had ever experienced. I couldn’t thank Wes enough for the heads up and showing me around.

Peter Herbst has 30 years of fishing experience around SE QLD. Everything from whiting to marlin has been a target at some stage but these days Peter enjoys nothing more than casting lures.
Previous Northern Conquest Charter Trip
Next Sight Casting for Barramundi