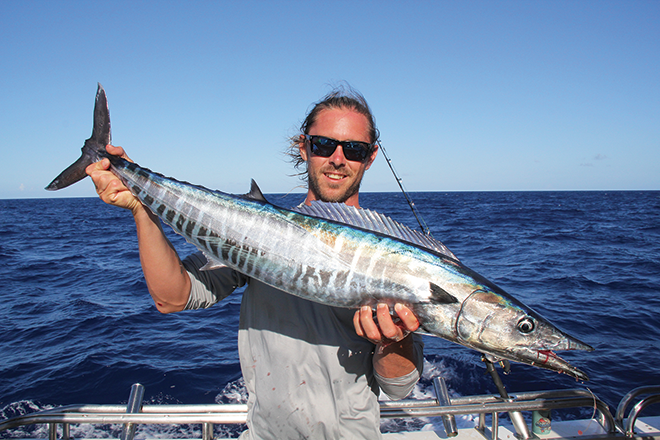 A speedy wahoo caught on the troll.

ANTICIPATION; it has to be one of the best things about fishing. If you’re anything like me, the days leading up to a Northern Conquest fishing trip are filled with excitement, decisions, optimism and preparation.

Sometimes even doubt creeps in – is the moon phase right? Are the tides too big? Will the current be roaring? Will they chew in a northwest wind? It’s all anticipation, and it’s the main reason why fishing can be so rewarding or so damn disappointing. Anticipation was high in the days leading up to what is becoming our annual offshore trip in Townsville.

There is nothing that heightens the pre-trip excitement more than when you’re going with nine or 10 of your best mates. Phones keep ringing and you discuss tackle, tides, forecasts, plans and brag about the size of the fish you’re going to catch.

Northern Conquest’s San Miguel was our vessel, a cracking boat I’d had the pleasure of fishing from a year earlier. A forecast of 20-knot wind wasn’t ideal and as the boys gathered for lunch at the Longboard Bar and Grill on Townsville’s Strand, the sea of white caps did its best to dampen our mood.

A quick trip to the pub and it was clear the boys were still excited, and no matter how bumpy our ride was to be that afternoon, we weren’t going to be thirsty! The plan was pretty simple: to head as wide as the weather would allow us on the first afternoon and evening, chase nannygai and spangled emperor by night, and head wider still if the conditions allowed.

Red emperor and coral trout were also high on the agenda. To be honest, the conditions weren’t great on day one and with a few of our crew ‘less seasoned’ on the water than others, I feared there would be some crook boys that evening. Nothing dampens anticipation like being seasick, but thankfully the lads remained healthy.

After several hours of steaming, a few beers and yarns it was time to fish. The action started slow, apart from the plague proportions of trevally. You name a trevally species, we caught it. Although they pulled ridiculously hard, they were so thick that they really became pests. In amongst the silver came decent spangled emperor, the odd cobia, green jobfish… and sharks.

For poor old Al from Gympie it was the start of a three-day battle with the shark population of north Queensland. Al could dead set drink XXXX Gold for Australia, and after three days on San Miguel he could have been awarded a baggy green in catching sharks as well. Day two was a little more forgiving weather wise, with the strong wind subsiding somewhat and making fishing a little easier.

Conditions were still far from perfect but good enough to get stuck into lovely coral trout and hard-pulling chinaman fish. Obviously the trout were more welcome aboard San Miguel, so Lukey, Drew and Sam quickly went to work on accumulating some 3-4kg models. My good mate Ross hooked a brute that most of us were calling a red emperor but as is often the case, a thug of a chinaman hit the surface instead.

Gympie guru Ivan decided to stop heckling my dad for a few minutes and managed a lovely coral trout on his light spin gear. BCF Sunshine Coast area manager Marty had never caught a red emperor, until now. All of a sudden he was buckled over in the corner of the boat, battling what was clearly a good fish.

If there had been a betting market on the battle, the red emperor would have been a very short-price favourite, but as time passed, Marty’s odds trimmed considerably and it was clear that the red emperor gods were smiling; and so was Marty as he proudly held aloft his first legal red. Marty was sent for a sit down, partly because he’d just landed the cracker we were all after but mainly because he was sucking in the big ones and badly needed a breather.

No matter how much you fish offshore, every single legal red that comes on board is a trophy moment. They are such awesome fish – tough to catch, great to eat and worth every second of the fight. Day two came to a close in similar fashion to night one, with Al battling the sharks, big Matt kicking back with a rum and Ivan heckling my dad. Luke decided to give the beers a bit of a nudge and the banter and games between he and Drew were priceless.

Good times, boys! With even better weather on day three, the lads were pumped because we were heading wider to some red country. The day started slowly, and it seemed as if the reds weren’t going to play the game until Ross came up tight on a good fish that nailed his flesh bait. The way it fought had red written all over it and sure enough, Ross was on the board with a red emperor of about 7kg.

Hope was restored but the fish’s mates wouldn’t chew, so it was back inside the reef for us. Some quality coral trout and redthroat emperor kept us entertained throughout the day before one of the coolest parts of the trip materialised out of nowhere.

A big whale shark cruised towards the San Miguel, inquisitive as to what we were doing in its backyard.

Slowly and without a care or worry in the world, this massive beast cruised on by, accompanied by a few remora and cobia. What a sight! On what was turning into an amazing day weather wise, we decided to deploy a spread of lures and kick back for a troll.

It wasn’t long before one of the reels was sent screaming by a pacey pelagic. Ross was first to surface and was rewarded with his first wahoo, a fish he was very keen to tick off his bucket list. A few more screaming reels on the troll resulted in a couple of solid dolphinfish, one of which became part of a shark-mauling smorgasbord on the surface.

In a scene hard to believe, this dolphinfish was literally obliterated from all angles by a pack of vicious reef sharks. It was no surprise that the Halco Laser Pro didn’t survive the carnage. We pulled up on another trout spot for the late afternoon session and I immediately landed a decent trout on a plastic. On the next drop I decided to mix up the retrieve and give it some speed.

Crunch! At first I thought I had caught my 75th trevally of the weekend but the first run was brutal, speedy and prolonged. I played this fish carefully, very conscious that I was only running 40lb leader. After a very sporting tussle, a quality spanish mackerel hit the surface and subsequently the gaff.A lucky capture on a plastic but good fun all the same, though it was nothing on what was about to unfold that evening. A hot session on the nannygai had eluded us during the trip – until night three. We pulled up on a bit of gravel with a good show of fish and from the first drop it was mayhem. Dad was nailed straight up, then Ivan, Matt, Luke, Drew, Ross, Marty, Sam, everyone!

Four and 5kg nannies were on the job big time. In amongst them were some lovely red emperor. Big Matt nailed a red and Sam did the same for his first-ever legal red one. Ross was dialled in to the spangled emperor and for once wished he wasn’t. Squid, flesh, plastics, it didn’t matter, the fish were in the mood. At one stage, Dad and I just looked at each other and shook our heads.

We were both hooked up to big nannies on light gear and we had that feeling that it just doesn’t get any better than it was right then. In a crazy session that lasted little more than an hour, we boated 30-odd nannygai, a handful of reds and a million more trevally and spangled emperor. It was north Queensland reef fishing at its finest and the very type of session we had anticipated for months prior. It’s hot bites like that one that make fishing so satisfying.

At the end of those kinds of sessions it’s as if you don’t even have to catch another fish all trip. You’re done, you’ve won, and the anticipation and excitement have turned into trophy fish, photos and great memories with great mates. And that’s exactly why we go fishing.

Cheers to Cliff and the crew at Northern Conquest Charters for another fantastic trip.

Chris grew up in southeast Queensland and chases everything from whiting and flathead to red emperor and snapper. Over the past few years Chris’s keenness for offshore reef fishing has grown into a passion. You might also catch Chris gracing your TV screens as a regular on Channel Seven’s Creek to Coast program.
Previous Kitting out your Kayak
Next Testing New Lures on Bass and Golden Perch