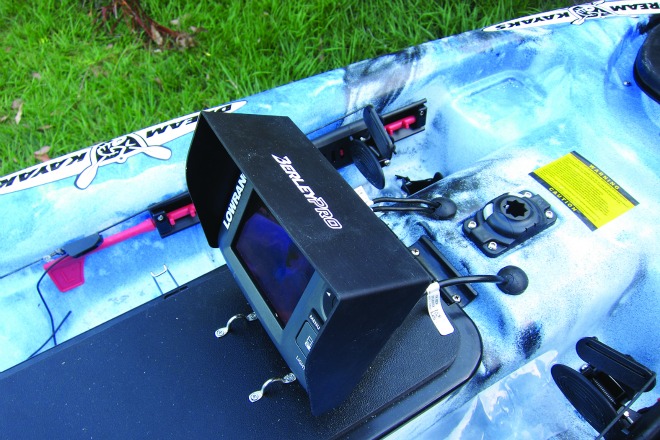 Kitting out your Kayak

Originally, very few products were made specifically for the kayak market.

Over recent years this has changed and many great products have been released to make kitting out your kayak to suit personal pursuits much easier.

Recently, while fitting out my new Angler’s Dream 3 yak that the boys from Dream Kayaks helped me out with, I came across a couple of products that have not only made things easier for me, but impressed me enough to share them with you.

First, while installing my sounder I was researching various ways of mounting batteries to the yak.

In the past I’ve run my battery in a lunchbox and either dropped it in one of the storage bags in a hatch or made up a basic mount and then glued it to the hull of the yak.

These two methods have worked but I have found that over time the mounts tend to come unglued and you end up with a loose battery in the hull (not the best when doing a surf launch).

While looking around I came across a company called BerleyPro.

I bought a visor for my Lowrance Elite-5 sounder and a battery mount for a 7Ah battery.

The battery mount is designed for a Hobie-style round hatch, but after drilling three holes it fits inside the front oval hatch of the Dream yak and is very solid yet easily accessed.

The battery holder can also be quite neatly mounted under a flat deck section.

The visor has turned out to be a great addition to the sounder, not only stopping sun glare but also protecting the screen from salt spray.

This makes it easier to read while on the water and protects the unit from potential saltwater ingress should the card flap be slightly ajar.

Another product I’ve been really happy with is one from a fellow member of ‘Noosa Yakkers’.

After struggling with the lack of rod storage in the majority of plastic offshore yaks, Pedro came up with a great idea that is easily used, allows up to three rods to 7’6” to remain rigged and keeps them extremely well protected from damaging sand and salt water while doing surf launches.

The solution was a fairly simple one: a dry bag for rods.

He calls them ‘Pedro’s Rod Bags’ and they can be found only on eBay by searching for ‘kayak fishing rod bag’.

Basically a giant dry bag made from heavy-duty PVC and featuring a carry handle and Velcro tie down, the bag simply rolls up at the end to seal it off from the elements.

To use the bag, unroll it and pack your rods inside before leaving home. The handle then makes it easy to carry them to and from the launch site.

Once packed, just roll up the end and clip the buckle together to seal the bag (if you leave a little air in the bag it’ll float if accidentally pulled off your yak in the surf).

When ready to launch, simply secure the bag to the top side of your kayak, making sure it is out of the way of your paddle stroke, and you’re good to go.

Once safely out the back of the surf you unroll the end of the bag, remove your outfits and roll up the bag to stow it in a hatch out of the way.

Now you’re set to go and just need to reverse the process for the return to the beach. For the small outlay this bag could save you quite a bit in reel servicing costs after a dunking.

So there you have it, two Australian kayak fishos who have invented a couple of great kayak-specific items that will definitely make it easier and less stressful to fish from your yak.

The added bonus is you are supporting our own economy and keeping money in our country.

So jump on berleypro.com and have a look at what’s on offer and also check out Pedro’s Rod Bags on eBay.

Ever since Stewart can remember he’s been chasing fish via many different methods. He enjoys learning new techniques and this had led him to meet some great people and visit beautiful locations. Since discovering kayak fishing, Stewart has found he loves the peacefulness that comes from drifting down a small bass creek and even more so the challenge of doing solo battle with a bluewater speedster. Recently he’s started working at Hooked on Angling & Outdoors in Tewantin, so if you’d like to have a chat and learn more about yak fishing, drop on in.
Previous Rain Flushes Crabs and Prawns into Tin Can Bay
Next Northern Conquest Charter Trip