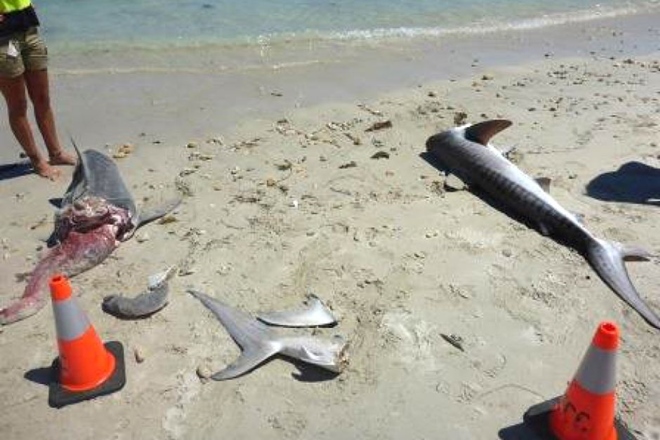 The shark remains were found scattered close to a swimming area at Sandtrax and Port Beaches. Photo: WA Government

THE mutilated remains of three tiger sharks have been found on a popular Perth swimming beach, prompting warnings for swimmers and condemnation from the WA Government.

A number of pieces of shark were discovered after they were dumped near the groyne at Sandtrax and Port Beach in North Fremantle yesterday. They have been determined as the remains of three large tiger sharks. Fisheries and Marine officers inspected the remains and determined all three sharks were above the maximum size limit — meaning they are totally protected fish.

The jaws had been removed from the sharks and their bodies had been cut up and left scattered across the beach. Fisheries Minister Dave Kelly said the actions of the fishers were irresponsible but could also attract other sharks to the area, in turn endangering swimmers.

“This illegal fishing activity is very concerning,” he said. “I’m also disturbed the offender discarded the remains on a beach close to a swimming area. The fishing activity appears to have been targeted to attract large sharks and therefore fishers should be mindful of the concerns and safety of other water users.

The catching of totally protected fish can potentially attract a fine of up to $5000. An additional mandatory penalty equal to 10 times the prescribed value of the fish by weight or number could also apply.