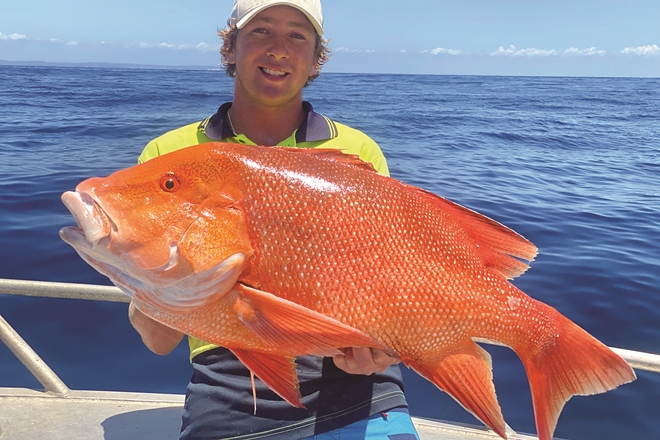 Harry was happy with an epic red emperor.

G’DAY crew! I hope you have managed to stay dry and out of the downpours we’ve had. But how good is this rain!? Good for the sea and great for the land.

On the topic of rain, Tin Can Bay copped a proper washdown at the beginning of February, with several locals recording over 350mm in a two-day period and more rain the following week. The creeks ran chocolate brown for about 10 days, but the next few big tides moved the fresh water on quickly. Now the waterways have had a good flushing, and with Tin Can Bay fishing refreshed, things should start to fire again.

Prawns will run in the coming weeks and rain has most definitely helped the cause. Garrys Anchorage and creeks west of Fraser Island should produce good prawns for the table. Sounding around deeper water in places such as Browns Rocks gutter should see you come up trumps. We’ve recently heard of nice prawns coming out of Crab Creek.

Speaking of crabs, mud crabs have flushed out too. Plenty of customers have reported good catches of bucks, with flats and drop-offs being the places to find them. Fresh bait and a good soak over a tide is the go. Mitch went out in the middle of a downpour with two mates and managed a good feed.

Don’t forget, the bag limit for muddies changed on September 1 last year and is now seven per person or 14 per boat with two or more people on board. Rain, hail or shine, mangrove jack are on the chew, with the local jack fishos saying so far 2020 is the best year they have had in the past four or five. Fresh mullet strips and smaller live bait are key for successful catches.

We have seen good fish coming from the heavy structure in Snapper and Teebar creeks, and of course, Kauri has been producing. In Tin Can Bay, bread and butter species such as whiting seem to have gone on holiday, taking flathead with them. Squid have also moved on and I don’t think the dirty water has helped much. They will be back once it clears.

Those who braved the weather got stuck into a few fish and not only jacks. We have seen an explosion of small poddy getting around in creeks and this is a welcome sight. Cod and bream are being captured in good numbers and sizes.

With the Tin Can Bay fishing refreshed, grunter are still on the menu for most fishos and the better catches have come from fishing the evening tide changes, with squid baits working best. Offshore produced the goods, mainly at the start of the month due to the weather. Ripper snapper are about too, again in decent numbers and bulk, with fish over 80cm not unheard of.

One of the local boys was trolling baits for a feed of spanish and had a small black marlin on for a few minutes. The footage he got was great, with the black taking flight around the boat. It sure had the crew hooting and hollering! We had a good start to the spanish run before rain and pumping swell thanks to tropical cyclone Uesi.

The close bar reef, Double Island Point and up the beach were the most productive. More fish are sure to appear in coming weeks and no doubt in better condition. It will be a case of making the effort to get to them and smacking a few.

Schools of small tuna have popped up everywhere out wide, so it would pay to have a Halco Twisty rigged and ready on a 20lb spin outfit. I am a big fan of retrofitting a single hook off the back instead of trebles. The hook-up rate is higher and, if you are releasing, it’s more humane and quicker to remove a single from fish (and yourself, if you’re unlucky).

That’s it from Tin Can Bay for now. We hope to see you on the water and remember, if you are in Tin Can Bay pop in for a chat. We love to hear your fishing stories, even if it is about the one that got away.

You can find us at the Tin Can Bay Marina, Emperor St for all your boating and fishing needs or a yarn.