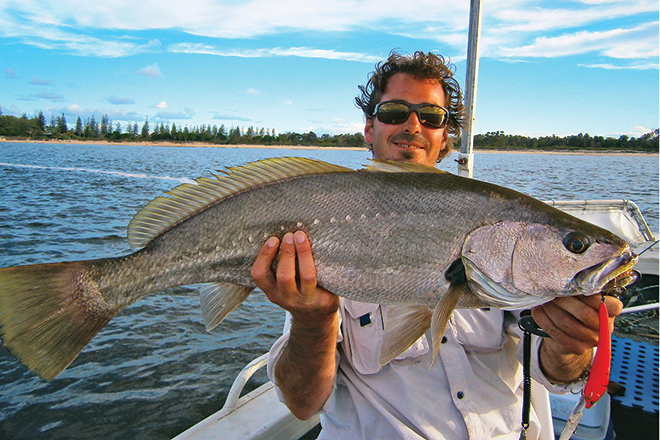 HERE we are starting a new month of fishing after a couple of tricky months due to a huge amount of rainfall caused by east-coast lows.

The upper catchment areas of the Tweed and Gold Coast rivers received hundreds of millimetres of rain through June, which had our local rivers and creeks running very fresh and extremely muddy during July. This complicated the fishing at times but the end result is going to be fantastic fishing during August.

One species I will definitely be targeting on my charters this month is the mighty mulloway, commonly known as jew. Jewies are one of the biggest apex predators in our local rivers, coastal beach gutters, headlands and offshore reef systems, but the rivers are where I focus on targeting jewfish and what we’ll discuss in this article.

Jew can be found through the entire length of a river system, from the mouth right to the far upper reaches, even in near-brackish water, but by assessing a few elements you can improve your chances of finding them. First, jewfish prefer the deepest holes in a river system.

And any hole that contains some structure on the bottom or along the bank is a real bonus. Once you have located the deep holes, the next element to consider is whether enough bait is in the hole to support the jewies. Jewfish are very nomadic in their behaviour and will migrate in schools up and down the rivers, only stopping in the deep holes that contain enough bait.

The Tweed River, for example, has deep holes that link along its entire length, and when I am targeting jew I only fish the holes that contain bait. I won’t waste time fishing the most predominant and well-known jew hole if no bait is present. Jew definitely spike in feeding activity around the tide changes and at night but they will still bite during the day, with cloudy and drizzly days advantageous.

Jew are not fussy feeders and will devour any critter unfortunate enough to cross their path. In saying that, you are still much better off trying to identify and match the primary bait in the area. Some of the most common river baits jew rely on are herring, poddy mullet and prawns.

As with most fishing, taking the time to rig these baits live will get you better results. I only target jew on lures, with the good news being they are great lure takers and will readily hit soft plastics, blades, vibes and hard-bodied minnows.

The technique that works best for me begins with finding the holes containing bait and jew. Both the bait and jew usually show up on your sounder as being on or very near the bottom. I then position my boat over the hole and lower a soft plastic, blade or vibe straight through the fish to the bottom and commence a series of small hops without winding the reel.

Most of my clients know I nickname this technique ‘tea bagging’. The small hops ensure the lure remains in almost constant contact with the bottom. Most predatory species tend to take plastics and blades on the drop after the upward action has initially grabbed their attention.

Jew are no exception, so it is important that once you flick the lure up with the rod tip you release and drop it to let the lure flutter back down. This technique allows you to fish right in the middle of the school, and if the bottom is made up of reef or rubble, your chances of snagging up are greatly reduced.

We release all the jew we land on the charters because they are a bucket list fish for most anglers and too much fun to catch just once. However, I never release them where I caught them because the released jew can spook and scatter the rest of the school.

I quickly move about 50m from the hole and then spear them in like a javelin because this gives them a rush of oxygen through their gills and sends them towards the bottom. Then of course I move back to the mark and hope to catch another one of these powerful sportfish.

Smithy has been working as a full-time professional fishing guide for over 20 years, which makes him southeast Queensland’s and northern NSW’s longest-serving guide. Above all the commitments Smithy has in the charter industry, his overriding passion has always been to pass on his specialist experience to anglers and teach people of all ages and angling abilities the correct techniques required to catch all the Gold Coast’s estuary species on a variety of different lures. Smithy’s unique charter operations guarantees you will catch fish on lures or you don’t pay.
Previous Noeby Fishing Tackle Review
Next Telwater Receives the First Shipment of Evinrude Engines