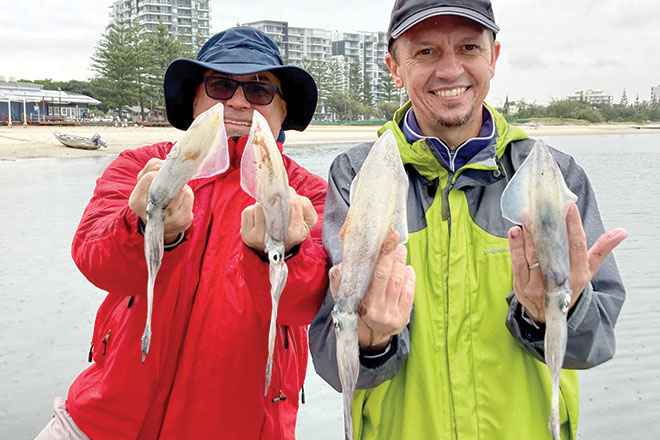 Dave and Shaun had a fun morning catching a feed of 20 squid with Clint.

AUGUST is a bumper month for flathead, flounder, winter whiting, tailor, school mackerel, bream and arrow squid in the Gold Coast Broadwater and the Nerang River.

I love catching all of these species for the customers on my daily charters and prefer to release most of the fish, though keeping a few legal fish for a feed is also fine.

I have never reached the bag limit of anything, and our own boat limit is to release flathead measuring 60cm or over.

It was a later start to the usual winter run here due to the massive floods we had over summer, with a staggering 4m of rain falling over upper Springbrook!

We are now starting to reap the benefits of the major flush out.

In July, arrow squid arrived with a bang – exploding in numbers and size daily.

I have written about squid before, but I am constantly learning more about them and will continue to share the knowledge with the faithful readers of this magazine.

Anyone who watches my videos on Facebook and YouTube will notice that I use a number of techniques to target and catch arrow squid.

One of the biggest tips I can give is to slow the retrieve right down. 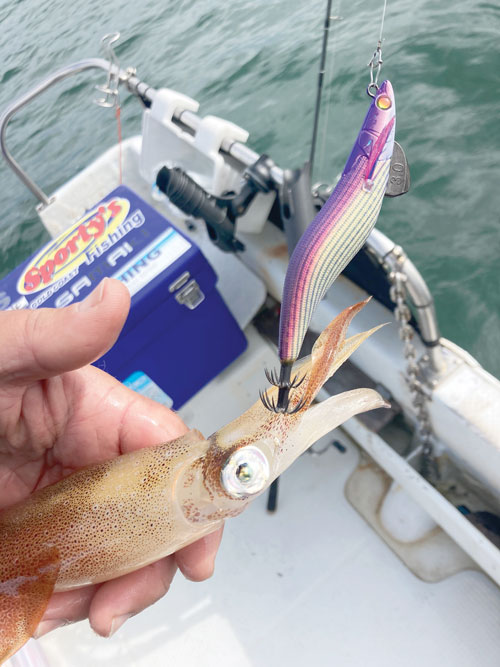 Arrow squid tend to reside in sandy hollows in channels around this area.

You can sometimes see them showing as vertical squiggles on a fish finder, though often they sit so close to the bottom they’re invisible.

There they wait for prey, using their amazing camouflage to match the colours of the sand, then shoot up to grab food passing by with the current.

The trick is to keep your squid jigs suspending close to the sandy bottom in 3-6m of water, with subtle lift and drop jigging.

If you are in the right area, it will be only matter of time before the squid latch on and get hooked on the prongs.

Often the best technique is to leave the rods in holders while drifting with the wind and tide in the same direction.