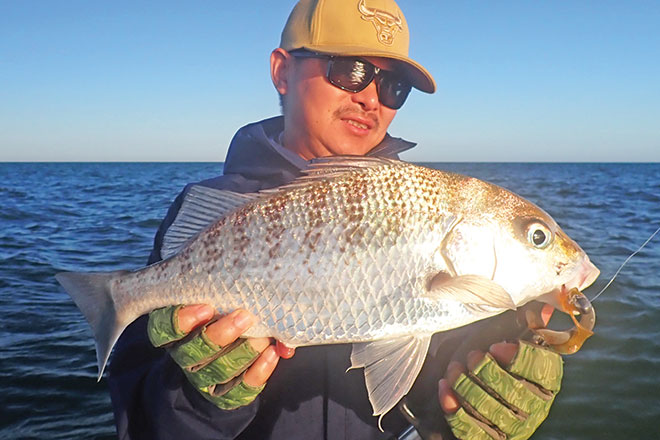 Ming with one of the winter grunter that have been by-catch while chasing snapper and trevally.

THOUGH horrible weather persists, we managed to get out in June, after the wreck that we will call May! Light gear

There have been quite a few days of cold weather, which signifies the return of snapper and the deeper schools of yummy grunter.

Fishing around the full moon was fairly good however, I do expect the fishing to get a bit tougher, especially around the neap tides.

Here are some things I try when the bite is tough. Lighter lures, lighter leaders and frustrate the hell out of them. Lighter lures often waft and sink more realistically, sometimes fished with slower actions and retrieves.

Think of a soft plastic and holding the lure, have you noticed how difficult it is to hold the lure dead still? It is impossible, so sometimes less is indeed more. Dead sticking can be extremely effective on fussy fish, though be sure the lure is actually in the vicinity of some fish. Often teamed with a light lure is a light leader.

It can be important to help the lure sink and transmit soft bites on the bottom.

Light leaders are obviously skinnier and hence harder to see, which is something to consider with the smaller winter tides and cooler water – two factors that control water clarity.

So far this winter, I have not been required to use silly weights or light leaders yet. Though time will tell. The above should catch you anything from snapper to tuna… yes, tuna. You may not see them boiling on the surface, but they are often schooled with trevally and snapper. Regularly they eat the lure on the bottom.

It is crazy how regularly we multi-hook up with snapper and tuna, particularly longtail.

Great fun, when the sharks go on holiday, are trevally. Hard-running diamond, stoic golden and brassy trevally. Thankfully, these fish are generally manageable on light snapper gear. Though tuna can be a handful, especially when they exceed the 1m mark.

A few nice queenfish are around too. Mostly under 1m queenies, but there has been the occasional horse mixed in. It would be nice to see these numbers hang around. Especially if a few big horses stay in the game. Do not fish light leaders with queenies because they will often rub the leader to failure. I recommend a quality hard-wearing 30lb leader as a minimum on fish that might be around or over the 1m mark.

In the past, I’ve had them wear out 40lb leaders, they have highly abrasive teeth. Queenfish are a fast and honest sportfish. In winter, they don’t seem to jump as much and hence do not burn themselves out – exhausted to the point of death. If you catch them, be quick with photos. And sometimes, a swim before release is a good idea, especially when the water is warm.

Diamond trevally are another fish you need to be careful with.  They too will burn themselves out. And if caught from deep water – anything over 15m – will at times suffer from barotrauma. If required, I use a release weight to plumb the fish down. Though if that doesn’t work, it’s into the Esky.  They are good table fare.

Fast photos will also reduce mortality rates. As a general rule, only keep fish out of the water for as short a period as possible.  However, if you are eating the fish, it doesn’t matter. But do not kid yourself about catch and release. Do so with care and attention, because what is the point of throwing back a compromised or dead fish?  Remember what catch and release is meant to be about… putting the fish first. The photo is nice to have, though it doesn’t compare to a fish that is re-caught after packing on a few more pounds and potentially spawning another generation.

Visit Tri's Fraser Guided Fishing Facebook page @ https://www.facebook.com/FraserGuidedFishingWithCaptainSquinty?fref=ts or give him a call on 0427 230 261 to book a charter.
Previous Flat out with flathead
Next Tips to target arrow squid