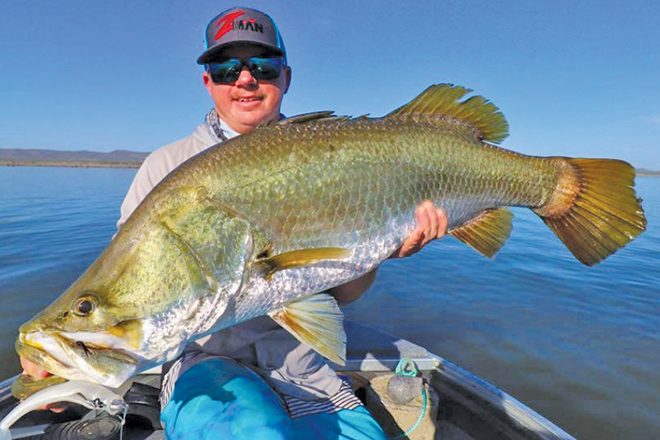 Declan with an impoundment barramundi on the go-to Z-Man 6” SwimmerZ and TT SnakelockZ combination.

With impoundments firing for barramundi and bass, mangrove jack on the chew and other heavy structure dwellers waking up from the winter chill, I thought it would be a good time to share a few tips for rigging and fishing with weedless rigged soft plastics. rigging weedless plastics

Weedless rigging allows you to present your plastic over, through and into heavy cover with minimal chance of snagging or fouling. This opens up the weed, mangroves, lilies, timber and other snags that fish so often hold in. Structure provides shelter and breaks from the current, while also attracting bait and creating ambush points. Putting your soft plastic in there puts you right in the action. rigging weedless plastics

Here are 10 things that work for me when fishing weedless. rigging weedless plastics

Many anglers find weedless rigging easier than standard rigging because you’re not threading the hook through a large section of the plastic, rather just pinning the chin, measuring where the hook needs to come out and pushing the point straight up through the plastic. You can watch videos on weedless rigging at tackletactics.com.au/rigging-guides

A decade ago, I experimented with weedless rigging and gave it away because the plastics were hard and stiff, which reduced the hook-up rate, and back then weedless hook options were quite limited.

Z-Man plastics have made weedless rigging both simpler and more effective thanks to their 10X Tough super soft and flexible ElaZtech material. The softness and flexibility of the material means the hook clears much easier when a fish strikes, making the hook-up rate excellent. While the durability of the material means it can be rigged without tearing, rigged over and over again and the plastic isn’t torn and destroyed when a fish strikes.

This makes weedless fishing effective, simple and affordable. Being super soft and flexible means a keeper system is needed to lock the soft plastic in place on the weedless hook or jig head, and this is where TT Lures jig heads have been designed with Z-Man in mind.

The ‘chin lock’ keeper system on the ChinlockZ, ChinlockZ SWS and SnakelockZ jig heads quickly and easily lock the chin of the Z-Man plastic in place, preventing it from sliding down the hook. These jig heads are also suitable for non ElaZtech plastics.

The addition of TT Lures ChinlockZ Finesse and SnakelockZ Finesse jig heads, down to a #4, have made it possible to weedless rig even tiny finesse plastics, such as the Z-Man 2” GrubZ for bream, trout and redfin perch.  It’s no longer only about mangrove jack, barramundi, bass and Murray cod.

If you haven’t tried weedless rigging or you’re keen to explore it further, you’ll find a guide to selecting weedless jig heads for the range of Z-Man plastics at tackletactics.com.au/rigging-guides

Where might I fish weedless, what might be the reason and where would I cast are a few questions I’m asked. Have a selection of weedless jig heads in your kit to suit the plastics you carry and the species you target and utilise them whenever snagging and fouling in structure becomes a potential hazard.