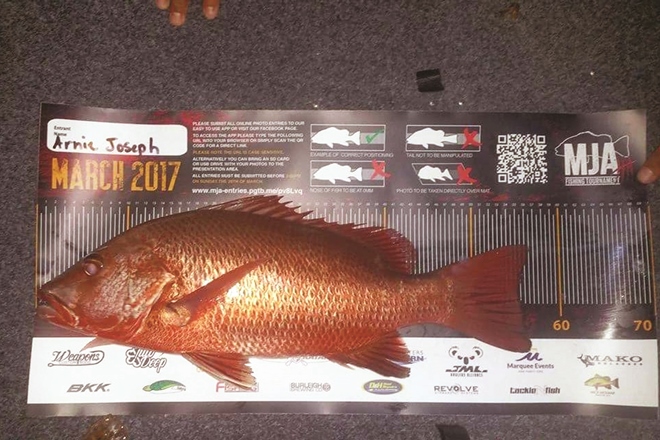 BIG Arnie Schwarzenegger once said: “I’ll be back,” and now Arnie Joseph has backed up his most centimetres win in November 2016 with an all-conquering win in both major categories of the March 2017 Mangrove Jack Anglers MJA Tournament.

Arnie took out the biggest jack division with a monster 56.5cm jack and scored the most centimetres trophy with a massive 346.5cm of mangrove jack captured in just one weekend. For landing the biggest mangrove jack, Arnie went home with a $500 BCF voucher from BCF Oxenford, a Weapons custom rod and of course the hand-carved wooden jack trophy supplied by Mick Molnar Marine Art.

For catching the most centimetres, he won a JML Donkey Hunter rod and JML plastics pack worth $300. Because Arnie is one of the nicest guys around, MC John Costello did not have to work too hard to get a few hints and tips out of Arnie regarding his tactics for the weekend and how he went about catching more jacks in one weekend than most of us manage in a season.

Second place went to the ever-consistent Shaun Hagan, who took home a JML Trophy Hunter Rod for his 56cm jack. Soren Pfeffer’s 225.5cm of mangrove jack saw him walk away with Mako sunglasses and a BKK trebles prize pack. The sign-in was once again a buzz of excitement, with fishos who had signed in prior to the event having the advantage of being able to get away in under five minutes.

The anglers from the other end of the Gold Coast were appreciative of being able to get away quickly to fish their spot before dark. We really encourage you to pre-register at BCF Oxenford for the next comp to avoid any delays on the Friday. This fact will be communicated on the MJA Tournament Facebook page before the November event.

The bonus species was a 60cm-plus trevally of any species. Unfortunately no one landed a big trevally, so the prize went into the lucky draw pool and was picked up by a fortunate competitor who attended the presentation. The jack mystery length was set at 48cm and a 48cm fish was captured by Justin Powell, who also came third in the combined centimetres division with 141.5cm of jacks caught over the weekend.

I was lucky enough to have Justin in my boat for the weekend and it was great to see some of his tactics first-hand. I’ve tucked a few into my kit bag for the next comp. The presentation was once again a real hoot, with MC John doing an awesome job and bleeding info from everyone who came on stage.

For this event we moved venue to the Coomera Waters Tavern and we hope to stay there for a long time to come.
Shannon and his staff bent over backwards to make sure we had enough food and drinks and nothing was too much trouble for them to help us out. With an award-winning roast and live music afterwards, the venue is a great choice for a Sunday session or as somewhere to relax with the family.

It was great to see so many young people enter the competition and the presentation was well supported by families and parents of young fishos who had given their all to take on Gold Coast jack fishing royalty. Shaun and Jayden were two young fellas I saw on the water over the weekend and they were going through the same rollercoaster of emotions we all do when chasing these elusive red locals.

We saw them frothing with excitement, arguing with each other, laughing and of course discussing tactics of what to do next. Seeing two young men willing to go through this for an entire weekend of catch and release fishing assured me this comp is in good hands in years to come.

I also noticed the boys were rewarded with a fish each. Once again, Dream Kayaks came on board with a $900 Beast kayak to give away as the major prize in the now-famous lucky door prize giveaway. This awesome prize went to kayak fisho Nathan Brennan who had just upgraded his own yak, so thought he might donate the Beast to his brother to help him with his jack fishing.

We know we are surrounded by good competitors and great sponsors but we will continue to work to make this competition even better with more categories and bigger prizes. The next event will be held in November this year, so keep an eye out for dates in these pages and on the MJA Fishing Tournament Facebook page.

We are finding the best way to fish this comp is to get a few mates together, even invite a mate who has never caught a jack, and spend quality time on the water with good people.
See you at the next MJA Tournament in November!