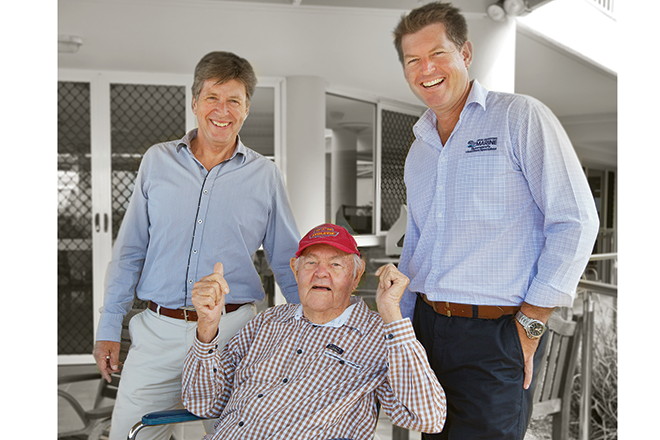 THE marine industry has been paying tribute to John Crawford, the founder of John Crawford Marine and a pioneer of the Queensland recreational boating market, who died in early April aged 92.

Matthew Hodson, current owner of John Crawford Marine and only the third in its 53 years of operation, expressed the company’s condolences to the Crawford family. “John was a true pioneer of our industry in Queensland,” he said.

“Over the years, he introduced thousands of families to the pleasure of boating.” John Russell, who worked with John Crawford and became the dealership’s second owner in 1987, described him as “an amazing man”. “John was not afraid to take on pretty well any agency he saw potential in so long as he could have it exclusively,” he said.

“He was a very brave businessman and a pioneer in the early days. “Many of the original ideas and concepts he introduced to the market are still around today.” John Crawford came to the marine industry in his late thirties after a career as a commercial traveller.

A passionate boater himself, he established his dealership on Wynnum Esplanade in Brisbane and laid the foundations for what was to become one of the most respected names in Queensland boating. In the early days, John Crawford Marine not only sold boats but built them as well.

Crawford recognised the potential of fibreglass as a construction material and launched his own brand called Compass Craft, which featured a range of runabouts. During this period, he also displayed his willingness to take on new agencies and, with his innate understanding of what the boating market wanted, helped establish a number of iconic boating brands.

One of these was the Quintrex brand which, at the time, was still being made in Sydney. Crawford shipped ‘raw’ boats to Brisbane, painted them and fitted them out, helping build the Quintrex name as a popular brand throughout Queensland and the Northern Territory.

Another time, while visiting the Sydney Boat Show, he was impressed by the recently released Hobie Cat sailing catamaran and immediately saw its potential as a fun, fast small sailing dinghy. He negotiated the Queensland distribution rights and eventually became the largest Hobie Cat distributor in the southern hemisphere, doing much to help establish the popular Hobie Cat racing circuit and social clubs.

Other agencies followed including Haines Hunter, Pongrass runabouts, Cheoy Lee yachts and powerboats from Asia, and a range of trailer sailers that Crawford did much to popularise including Hood, Bruce Farr, Sunmaid, Sunbird and the popular Tropic 520 among others.

In time, he opened another dealership on the Gold Coast and another yard in East Brisbane dedicated solely to sailing yachts. John Russell said when he took over the business, it was an obvious decision to keep the John Crawford name, such was the respect for it in the industry. “He was a big influence on many people’s lives, including mine,” he said.