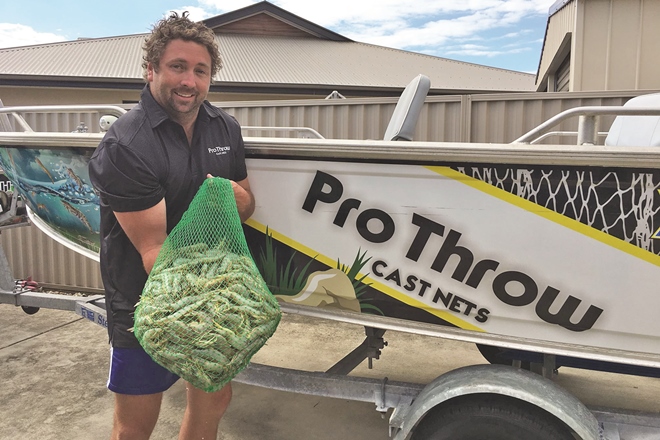 Drew with the fruits of a solid morning.

IF you’re anything like me, you will spend the Christmas and New Year period attempting to eat your body weight in prawns.

There’s just something about these tasty little critters. A Queensland summer isn’t the same unless you’re tucking into a few fresh prawns in the sweltering heat, washing them down with cold beers while the Aussies smash the poms in the cricket. That scenario is almost as good as going fishing, to be honest!

It’s about now that I need to introduce Drew Argus, a mate of mine, and an absolute guru on everything estuary fishing and prawning. As far as whiting anglers go, you’d be hard pressed to go past Drew, and as for the prawns, well they just don’t really stand a chance when he is around. He doesn’t mind a feed of them either, let me tell you! Drew has recently taken his passion for prawning to a whole new level by launching Pro Throw Cast Nets.

For a long time, Drew actually constructed his own cast nets, custom made for prawning in our rivers, creeks and bays. After hundreds of hours on the water, year after year, Drew’s nets and prawn captures were getting noticed. Drew constructed a number of nets for mates and prawners who desired them and then decided to embark on a journey to find a supplier he could work with to create his custom net at scale, aiming to offer the premium purpose-built prawning cast net on the market. After 18 months fine-tuning the production, Pro Throw Cast Nets have hit the market, and I sat down with Drew to get the low-down on how to maximise your chances of catching prawns in southeast Queensland.

CR: Drewy, you seem to manage to find the prawns more regularly than anyone I know, but what is the best time of year to go prawning in southeast Queensland?

DA: It really does change every year depending on the climate and rainfall. Generally speaking, the period from February to the end of May prawns best but it’s fairly common to still get good catches into June. Rainfall is key as the fresh water impacts the rivers and creeks by flushing baitfish and prawns towards the saltier water at the mouth. I like prawning on the run-out tide in the rivers and creeks. In more open water in the bay, a change of tide is best because the prawns will tend to rise off the bottom during periods of low current flow.

CR: What type of prawns can you expect to encounter in our rivers, creeks and bays?

DA: You’ll generally catch three species when prawning in southeast Queensland. Most common is the banana prawn, which is typically a nice size and really good eating. Greasy bay prawns are usually a little smaller and best used for bait, particularly live. School prawns are mostly found up the rivers and creeks. On the odd occasion you’ll come across a few tiger prawns mixed in your catch. Commonly, the eating quality of prawns caught in more open waters such as Moreton Bay is slightly better than in the rivers and creeks. Having said that, my favourite way to eat any of these locally caught prawns is by cooking them on the barbecue or making prawn cutlets rather than boiling them.

CR: You’re based at Redcliffe, a northside boy, so where are your favourite locations to chase a feed of prawns?

DA: The Pine and Caboolture rivers are good places to start. Having said that, the Brisbane River and Pumicestone Passage hold good numbers of prawns at times.

Bramble Bay, out the front of Clontarf Beach, is my go-to area in Moreton Bay. South of Brisbane, a good place to start is Jacobs Well, as are the power lines, Rocky Point, the Saltworks, Redland Bay and the Logan River.

CR: When you’re out chasing prawns, how do you find them?

DA: Like when you’re fishing, having a good sounder in your boat can make all the difference. Occasionally, the prawns will shower on the surface and give away their location but most of the time you need to locate them in the deeper water using your sounder. Using your sounder, find deeper sections of the creeks because prawns will tend to retreat to those on a dropping tide. Playing around with your sounder settings is also important. Every sounder is different but if you get the settings right, it’ll make prawns easier to locate and you’ll be able to use those shows as a guide each time you chase them.

CR: Obviously you’re pretty passionate about prawning and no doubt believe a quality cast net is the key to catching them consistently, given you’ve just introduced Pro Throw to the market?

DA: Again, like fishing, you need to be confident in your gear. Top-pocket nets are by far and away the best for targeting prawns. Prawns will typically swim up once captured, thus congregating in the top pocket where they can be easily accessed before casting again. Bottom pocket nets will work, but you’ll be spending a lot of time removing prawns and baitfish from your net, which means less casting. The gaps between your mesh are also important because you obviously want to ensure as few prawns as possible can get through it and escape. The weight around the perimeter of your cast net is important too. The heavier it is, the harder it is to throw but the quicker it will sink, allowing it to trap more prawns before they escape. No matter what net you use, cleaning it after use and taking care of it is the key to being able to call on it season after season.

CR: So in your opinion, what should people out there look for in a cast net specifically for prawning?

DA: In no particular order, these are the most important factors, in my opinion.

CR: Throwing a cast net isn’t easy, for me anyway. What are your tips for throwing one?

DA: There are heaps of different ways to throw a net and it really doesn’t matter how you do it as long as it’s comfortable for you and effective. First things first, you need to find a net you’re comfortable holding and make sure it’s not too big or heavy. Learning techniques off other prawners or anglers gathering bait is a really great way to discover different techniques and figure out the one that works best for you. There are also plenty of ‘how-to’ videos on YouTube and social media, so it’s worth checking those out and practicing in the backyard. Some techniques are easier on the body than others, so you just need to find out what works for you and practice the technique that will allow you to keep casting all day.

CR: For those chasing prawns for the first time, what are the rules and regulations to note?

DA: Here in Queensland, we have a possession limit of one 10-litre bucket of prawns per person. Nets are not to exceed 3.7m in length and must have a mesh size no greater than 28mm. The recent white spot disease outbreak has seen a containment area applied to waters (and inland areas) of southeast Queensland. It is very important that the spread of this disease is prevented, so paying attention to that containment area is key. It always pays to check your local regulations online before you go prawning in case anything has changed, particularly in relation to the prevention of white spot.

CR: So when you’ve caught a few prawns, and you’re not too keen on using them for bait, what’s the best way to look after them?

DA: Always ensure you keep your prawns in a cold ice slurry. It’s really no different to storing fish; you want to cool them down as quickly as possible and not allow them to stress because that may impact their eating quality. In terms of storing your prawns, I find two ways work equally well. One is removing the heads but leaving the shell and tail on and freezing them in containers filled with salt water. The other is storing them in bags with the air removed, preferably by using a Cryovac machine.

So there you have it – a few key things to note if you’re keen on catching a feed of prawns over the next few months. If you’re interested in a Pro Throw Cast Net, check out the Facebook page at facebook.com/prothrownets or the website prothrownets.com.au

Better still, give Drew a call on 0421 815 608 and he can put you in touch with your local tackle shop that stocks them.

Chris grew up in southeast Queensland and chases everything from whiting and flathead to red emperor and snapper. Over the past few years Chris’s keenness for offshore reef fishing has grown into a passion. You might also catch Chris gracing your TV screens as a regular on Channel Seven’s Creek to Coast program.
Previous Coomera River holding GTs and mangrove jack
Next Southsiders 4×4 convoy to raise funds and awareness for Autism Queensland