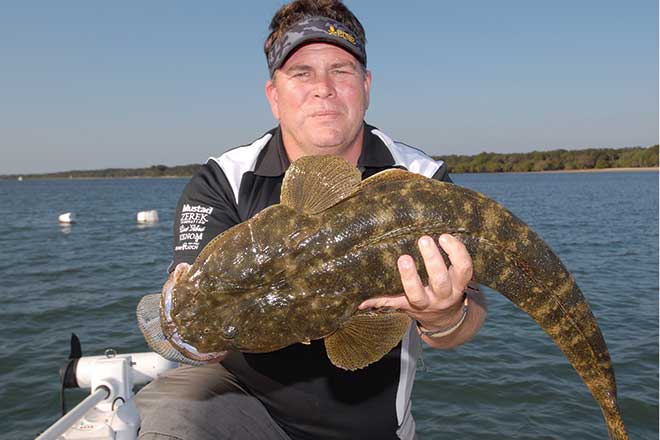 Kord Luckus with a sizeable flathead caught in October.

PEOPLE often ask why I’ve got such a fascination with flathead fishing.

Commonly referred to as ‘humble’, flathead fishing can be easy some days and then the next day they can be horribly shut down with lock jaw. The attraction is they are such challenging fish to target given they respond to so many different techniques and lures in a wide variety of locations.

I love tinkering with tackle to find the lures best for flathead fishing. Given that literally hundreds, if not thousands of lures could possibly catch one of these fish, a ‘go-to’ lure that is a tried and tested workhorse is something most good flathead fishers will have in their tackle box.

For me, a couple of dozen lures I have enjoyed using over the years have given good results, but as the wheel turns and the season goes by, I usually get bored and find another interesting lure to fill the void. Those scratched and beaten-up ‘oldies’ are usually relegated to the back of the tackle box and are pulled out for a reminisce every couple of years.

I’ve been fishing Jumpinpin since I was a young lad, however it’s only really been in the past 20 years that I’ve put more thought into tides, water quality, water height and how to best fish the area. Generally speaking, a lure that’s hitting the bottom when trolled or jigged will usually catch the most fish, however the next fish that’s taken 2-3m off the bottom certainly won’t be the last.

Flathead are also renowned to be a lazy piscatorial target but I’ve seen them swim from 10m or so to take a lure, so they aren’t as lethargic as some people may think.

Flathead fishing in the shallows is one of the easier ways of cutting your teeth, and trolling lures is certainly a way to find the fish as quickly as possible. What you do once you find the fish is entirely up to you.

Two scenarios come to mind: either turn around and continue to troll the same area or deploy the electric bow mount motor, hit anchor mode and pepper the areas with casts instead. Although trolling is certainly not my preferred method of fishing, I have a lot of faith in the merits of this technique.

First, a lot of ground is covered and when a fish or two is found often more will be in the vicinity, so it’s important to keep hitting the area and not drive away from it. Second, the lures are usually in the water longer compared to casting techniques. Third, it works.

It’s a must to look for baitfish in the area because we have found over the years that if there’s no bait, there’s no flathead. Another area that is a must to fish is any place where water is running over the banks. If fishing weed beds, you’ll find fish sitting in the bare sandy patches in the weed.

The most important thing to remember is to use a lure suitable to the depth being trolled and a good boat driver will keep an eye on the sounder and GPS to mark where fish are being caught, along with formations such as gutters or depressions/holes that can be revisited in future trips if the area produces.

When flathead fishing, consider trolling the contour lines around the edges of banks and work your way around, playing with the depth trolled. You don’t necessarily have to stick to the edge of the bank either because at high tide or when there’s sufficient water covering a bank, it’s possible to troll over the top, looking for small gutters in the weed beds as well as the bare patches.

With regards to my favourite lure, I enjoy the results from the floating Zerek Tango Shad 50mm hard-bodies. The Ayu colour is great over the sandy bottom and I also have a bit of a soft spot for the UVG, though I’ve had success with most of the available colours.

Three out of the past four Gold Coast Flathead Classic podium places for Team Wilson were due to this lure’s ability to catch fish. When targeting flathead, I generally concentrate from Tulleen Island in the Broadwater northwards to Russell Island.

Also look at the channels leading from Jacobs Well and Cabbage Tree Point because good patches of fish can be found in these localities. An abundance of flathead territory is out there ready to be explored and as much as I’ve fished the Pin, there’s always a new little nook and cranny that deserves a look.

I’ve found a lot of success flathead fishing in the deep using a variety of lures over the years, from the 7” Berkley Gulps through to the Zerek Fish Traps I’m using today. How these are fished in the deep depends on tidal flow. If just starting to fish the deep with lures, first things first, buy yourself a tackle back device, which will save you a lot of money if you happen to snag your lure on the bottom, and believe me, you will!

Even as a sponsored angler with Wilson Fishing, I don’t break off lures for the hell of it and will do my best to retrieve my lure and line from the depths. It’s best to try this technique when the tide slows at either low or high tides or when there is minimal tidal movement between high and low.

I mostly use the 65mm and 95mm Fish Traps and occasionally the 110mm if needing more weight. Using the electric motor, I’ll set my position and cast up-current, slowly drawing the rod tip up and down while winding up the slack.

Sometimes all you will feel at the business end is a ‘tick’, so you need to be on the ball to strike. At other times the flathead hit so hard you don’t make a mistake. Depending on the tidal movement, I’ll use the electric motor to drift with the tide and ‘tea bag’ the lure in an up/down motion below the boat.

Using this method I’ve caught mostly flathead but also mulloway, longtail tuna and even whiting. The flathead fishing should be good for a bit longer but they generally slow around the Christmas period. Also, congratulations to the winners of this year’s Flathead Classic: the Lowrance Whyte Boyz who smashed the other 275 teams entered to take top position.

My team, Team Wilson, still came in a respectable sixth, however we’re definitely aiming to make it back to the podium in 2018!