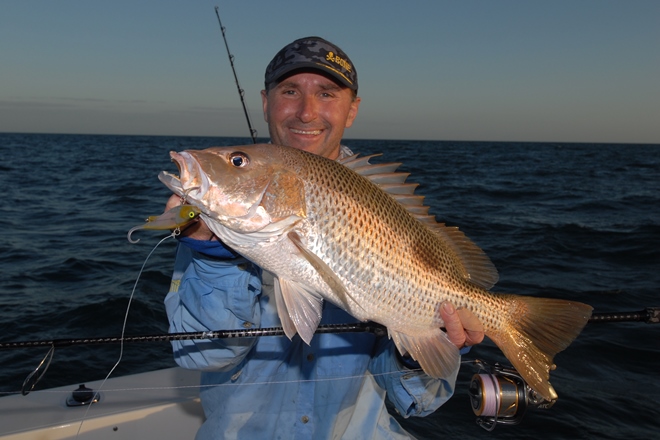 The Zerek Fish Trap was deadly on fingermark and negated the need to carry smelly bait.

Weipa fishing well worth the effort

MOST anglers have destinations on their bucket list that they would love to visit just once, however my bucket list can easily fit Weipa onto it several times over.

Fishing around Australia for several years while caravanning and living the nomadic lifestyle made me realise just how special the fishing in Queensland really is. We’ve got fabulous river systems, impoundment fishing, beach fishing and offshore fishing and a lot of it is within cooee of our cities and large towns, which means access is usually pretty good. Weipa is situated on the western side of Cape York Peninsula and has long been a popular destination for fishers and four-wheel-drive enthusiasts.

The drive to Weipa is slowly but surely becoming an easier ordeal, with roads regularly graded and upgraded to bitumen. Regular flights into the community have made it even easier for anglers to gain access to Weipa’s world-class fishery. I have driven to Weipa several times, flown in many more times and have helped take a mother ship from Cairns and around the tip to Weipa on a couple of occasions as well.

As it had been two years since my last fishing trip to Weipa, it was really kind of Leeann to send me off for my birthday for a week of fishing with my good mate Dwayne Jay. Dwayne originally guided in Weipa for a number of years before settling down to take a position in the mining industry. We teed up the itinerary for my trip months in advance and planned to target the large barramundi to the south of Weipa, catching a couple of reef fish along the way as well as pulling some drag on the big population of sailfish situated off the Cape’s coastline.

The plan was to fish from Dwayne’s smaller tinnie in the creeks and rivers, which are quite shallow, which meant it could be towed behind the 7.3m Trophy at a snail’s pace, however to traverse south from Weipa at some sort of respectable speed, Dwayne had made a cradle so the tinnie sat in the Trophy. As we ventured south, we paid particular attention to the sounder and any indication of a reef, particularly new ground that we would fish for our first target of fingermark. We took no bait with us, which meant every fish from the river to the ocean would be caught wholly and solely on lures. Once we had marked a reef, we dropped our Zerek 110mm Fish Traps into the depths to work them in a drop and draw method.

That is, if we could actually get them to the bottom without a fingermark smashing the lure first. No Fish Trap colouration stood out to be better than another and myriad methods could have been used, however the simple drop the lure to the bottom before raising the rod tip method worked without getting too technically minded. The fishing was fast and furious, and being such a remote destination, we easily reached our bag limit, however we returned each capture and happily left them biting after we’d had enough of fishing for them. The fingermark came from a water depth of 14m.

Our barramundi fishing for the trip was disappointing by Weipa standards. We were to fish the Kirk River, however the river was running a putrid brown.    In another turn of events, the Holroyd River was being fished by netters and a bunch of nomads had set up base along the foreshores, meaning we were definitely not going to have the place to ourselves as planned. We ventured north, entering a long-time favourite river of Dwayne’s to cast the mangroves at high tide, where we started picking off some barramundi. The rivers are home to a large number of species and we also encountered queenfish (hard not to in Cape York!), mangrove jack, small fingermark, pikey bream, trevally and cod to name just a few.

Zerek Barra-X Pros and the Fish Traps were our go-to lures and although the action wasn’t thick and fast, enough was on offer to whet our appetites but it definitely wasn’t up to my expectations due to outstanding experiences on past trips. A trap for young players is navigating through the shallow river systems, as with discoloured water comes the inability to see sand and mud banks as you are travelling. As it was, even with a lot of experience on board we managed to get the little tinnie stuck for a couple of hours late in the afternoon.  Thankfully it was only a short while and an incoming tide saved us from spending a whole tide on the bank.

Leaving the tinnie in the creek, we were able to head offshore to target sailfish, which have been a very popular target for Weipa locals. The billfishing is sensational and we came across a couple of pods of sails that were very keen to take our trolled lures. It certainly reminded me of the great billfishing I had experienced in the past at places such as Broome, where schools of sails can be seen swimming on the surface. Trolling a lure around this area, the hungry pack just couldn’t keep off the pushers we were using. I could only imagine how good fly fishing for these fish would be because the odds are definitely on the angler’s side.

As this issue hits the stands, the Gold Coast Sportfishing Club’s annual Flathead Classic will be running. And with plenty of good flathead fishers in the mix, it will be a very interesting podium finish on the final day. Teams have been honing their skills for the past couple of months using various techniques and have caught plenty of fish and some bloody big ones at that, so I imagine it’ll be a great competition. Good luck to all.