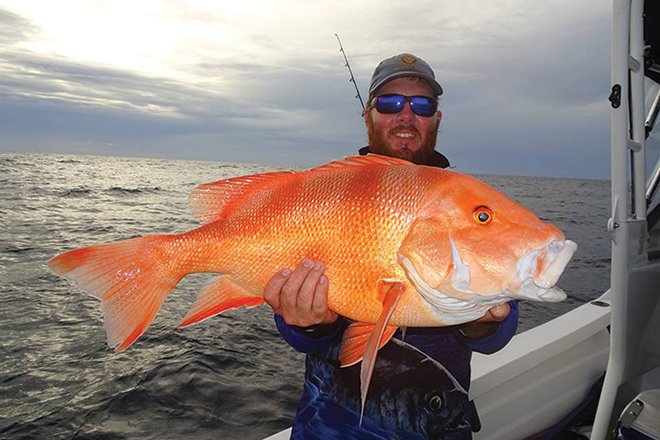 Matthew Arkell with the final red of the trip before the weather turned nasty and the crew bolted for shelter.

Torres Strait and Cape York in the wet

THE 2017 wet season has been a cracker, with Cape York and the Torres Strait copping a good drenching.

The northwesterly wind brings the monsoon rain, which gives the mangrove systems of Cape York a real flushing and springs everything back to life. Those fortunate enough to live in the tropics year round can take advantage of the best fishing conditions, which occur at the beginning of the year.

Between the heavy downpours and storms are periods when the wind often completely drops out and the seas turn glassy calm. Keen fishos make the most of these opportunities to explore the more remote reef systems on the east coast of Cape York Peninsula.

The gamble is the weather can be unpredictable and storms can brew quickly, turning the seas into a washing machine and putting a real dampener on things. We managed a couple of epic long-range trips recently, venturing about 80 nautical miles from home base on Thursday Island in the Torres Strait.

These remote missions take careful planning and fuel calculations because help is a long way away. With everything packed the night before in a mate’s 6.6m Trailcraft centre cab, we waited for the first glint of light in the morning before launching the boat. During the wet season, floating debris such as large logs are pushed out of the Cape and Papua New Guinea river systems and become a real hazard on the water.

The first adventure was a huge day trip and we couldn’t have asked for better weather. We first checked out a high spot we found using the Navionics app. A large rock was covered in bait, so we threw out a couple of Rapala X-Rap Magnum 30 hard-bodies and as I was about to drop the third lure in, the first two reels started screaming simultaneously.

After a couple of blistering runs, we boated two spanish mackerel of about 10kg. What followed was one of the best mackerel sessions I’ve had in a long time, with the rods peeling over within seconds of clicking the boat into gear.

We released all the smaller fish using pliers on the lure while the fish were still in the water. We kept a few of the better fish for the table as well as reef baits. The crew tried dropping a couple of baits to the bottom but the mackerel bit us off before we could get down. They love shiny snapper leads.

Next we travelled a few more miles to hit an area we hadn’t fished for a couple of years and thankfully found the nannygai in residence were hungry. We dropped squid baits and mackerel slabs to the bottom on our double paternoster rigs with 10oz snapper leads.

Over a couple of hours we managed to pick up quality large-mouth nannygai and returned the small-mouth variety back to the water because they don’t seem to suffer as badly from barotrauma and in my opinion aren’t as good to eat.

Along with nannygai, we managed coral trout, sweetlip and a fingermark (golden snapper). We left the fish biting and headed into a small sand cay to refuel. I sent the drone up for a bird’s-eye view and got great footage of the surrounding reef and an isolated storm cell.

The water was crystal clear and I regretted not packing the dive gear. We headed back out and put a couple more grassy sweetlip and nannygai into the box. It was now mid-afternoon, so with a healthy Esky and a lot of miles to cover, we decided to make tracks.

The second trip was a little more eventful because we opted to camp in the boat for a couple of nights while exploring a little further than the previous trip. We left late one afternoon in glassy seas and arrived at our destination on dark.

We dropped the baits and hooked straight up, landing large-mouth nannygai, a cracking fingermark and a black jewfish. Unfortunately, the sharks soon found us and we lost any decent fish we couldn’t skull drag up.

We persisted and simply continued to chew through our valuable supply of hooks and snapper leads. In the end, the sharks were so bad we couldn’t even get our baits halfway down without being bitten off. We could see about a dozen smallish bronze whalers circling the back of the boat.

Disappointed and buggered, we put the rods back in the rocket launchers and headed into the shelter of a small island to sleep. The next morning, we trolled up a couple of spanish mackerel to use as bait and decided to bottom bash rubbly ground in 35m of water.

We instantly got quality bites on the big mackerel slabs, which certainly got our attention. Failing to hook up, we rebaited with mackerel and dropped again. This time I came up tight on a solid fish. This thing fought all the way to the top, which had me thinking it wasn’t a nannygai, fingermark or coral trout, all of which would get barotrauma in this depth of water.

As it neared the surface, “good red!” was the call. A solid 10kg red emperor was lifted into the boat and there were high fives all round. In the shallower waters (20m or less) around Thursday Island, we get quite a few juvenile reds but the deeper waters further east (25-45m) produce the better specimens.

After a couple of pics, everyone eagerly dropped again and it was a three-way hook-up, with everyone getting stretched. Halfway up, the fight slowed, which indicated the fish had barotrauma and weren’t reds. Three fingermark were lifted aboard and we shared more high fives.

The Esky was glowing red and gold and everyone’s eyes were glued to the sounder. We worked the area for a couple of hours, picking up a few more red emperor to 9kg, quality sweetlip, coral trout and fingermark. Of course, we lost a quality fish to the taxman but that is to be expected.

A large storm we had been watching had now closed in and the seas were whipped into a confused mess. We took shelter on the lee side of a small nearby island and hoped the storm would soon pass. It didn’t.

With lightning and thunder crackling all around us, we felt very uneasy sitting in the boat in the middle of nowhere, so decided to go ashore for a look around. Another crew of blokes from Thursday Island who had been spearfishing the area also came in to find shelter.

Their visibility under water had quickly deteriorated as the storm stirred up the reef. It was a long afternoon and after nearly four hours we tried heading out to see if conditions had improved but soon turned back for the shelter of the island.

We cooked up some fish, had a few beers and sorted our anchorage for the night because there was a big low tide in the early hours of the morning and we don’t like the boats to go dry. Our plan was to fuel up in the morning and work our way back to Thursday Island, island hopping if necessary.

It was a wild night of heavy rain and being tossed around on anchor. The weather hadn’t improved in the morning, but we fuelled up and slowly made our way home. While fibreglass boats are known to have a smoother ride than alloy rigs, the big plate alloy Trailcraft ate up the messy conditions and handled beautifully.

The trip hadn’t quite gone to plan because we had hoped to do a bit of spearing and work the small sand cays in the area by throwing poppers and metals for GTs and trout. However, we certainly couldn’t complain because we had great fish in the Esky.

It took us about four and a half hours to return to the ramp. While the weather certainly is unpredictable in far north Queensland during the wet, with careful planning you can access mind-blowing remote fishing.

Check out our new Facebook page ‘Fishing Missions – Northern Australia’ for footage of these and other trips. 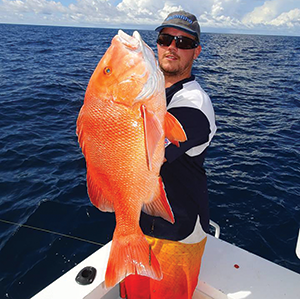 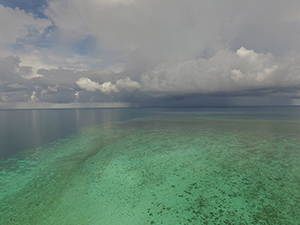