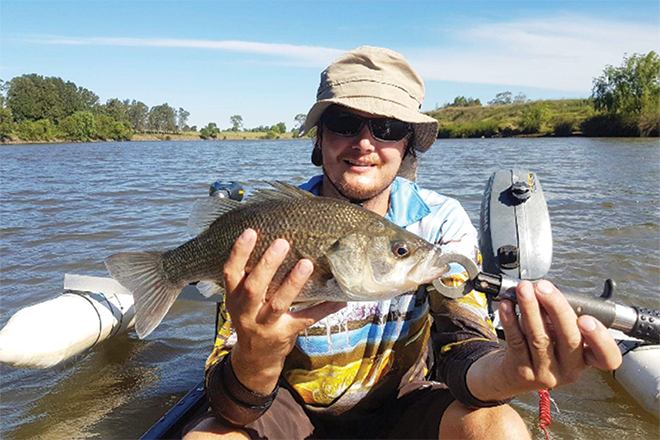 Trolling for bass by kayak

I HAVE enjoyed a fantastic month of bass fishing. My mates Benny and Nicko recently showed me a new and relaxing way to hunt down these hard-pulling brutes: trolling by kayak.

I call it ‘lazy fishing’ but it’s heaps of fun and produces great results.

I’m sponsored by Viking Kayaks Australia and Viking’s yaks are perfect for the fishing I do. Kayaks play an important part when targeting bass in our area. I’m new to the freshwater trolling scene but I’m hooked.

We have been taking our yaks to a river near Morpeth, about 20 minutes’ drive east of Maitland. Morpeth is popular for its history, cafes, antique shops, clothing shops, ice cream shops and the famous pub, which is a must for a quality steak and a cold one.

Farms are scattered throughout the area and amazing farmhouses line the riverbanks.The tree-lined banks are beautiful, with the old willow trees above and below the water making it heaps of fun targeting bass in the snags.

We have lost a few lures while trying our best to tempt the hard-fighting fish out from their tight surroundings, but if you’re not in the snags, you’re not on top of the fish, so you have to put aside the cost of your favourite lure and go for it because you never know how big that next fish is going to be.

I’ve been using great lollies from Zoomy Lures and Last Cast Spinnerbaits and trolling them with unreal results. It’s a shame I have to work or else I would be on the water every day using these lures. So let’s get into this trolling adventure.

On my Viking kayak I have a 30lb electric trolling motor supplied by Haswing Marine. I twist the handle to its first or second setting (fast walking pace) and then run a diving lure or spinnerbait to 3m, which is the perfect depth for targeting bass in the rivers.

Besides the tree-lined banks are man-made structures such as rock walls. For some reason, bass like to hang out along the walls as well. Benny and Nicko told me the bass would be bigger when trolling past these different structures and I soon found they were right.

In the snags, on most occasions the average bass was in the 30-40cm range and the fight was great, but when we hit the walls our reels screamed. Along the walls the fish put up a different fight altogether.
Several bass just under 50cm were landed, which was awesome.

When trolling for bass past the snags in the tree-lined areas, the fish would rush out from the branches and slam our lures but strangely they would not run back to the snags, rather they would fight out in open water.

I thought this was weird but it was great to know my lure and fish would make their way safely to the net. When trolling, I found if the lure or spinnerbait was not at least 25-30m behind the kayak, the lure would not swim as it was designed to.

The penny dropped when I realised the boys had caught five fish each and I’d hooked zilch while running the lures closer. My tally changed after having a chat with Benny and Nicko and listening to what works for these two great anglers.

I can’t thank them enough for the info they shared with me. The next day was very hot and we decided to get on the water early around 3pm because the barometer was starting to climb and this would be the best time to go trolling for bass.

After setting up my Viking and the boys doing the same to their canoe, we were on the water and straight into the bass. Within five minutes of launching we were hooked up and knew we would be in for a treat.

Since I was new to trolling for bass, I felt I would do the right thing and let the boys lead the way upriver while I picked up whatever bass they missed, or as the boys put it, I could fish their dirty water.

I had no problem doing that because they did miss a few and I got the rewards. After travelling about 15km upriver it’s understandable why most fishos call it lazy fishing. You cover much more ground than casting your lures at every snag.

On the way back to the ramp and with not much light left, the guys showed me great spots where they like to use surface lures. This kind of fishing really makes sense to me now. They use deep-diving lures to troll when the sun is high in the sky and then as the sun is about to go down, they get to enjoy surface fishing for bass.

With the barometer still climbing, we knew we would see great surface hits. We did and the surface bite was fantastic. I’m looking forward to chasing these hard-pulling native fish again very soon. I’d just like to finish with a huge congratulations to Benny and his amazing partner on their second child.

‘Til next time, stay safe on the water and I hope you score a few for the barbecue.

If you would like any more information about where we have been trolling for bass, jump over to my 3waysfishin Facebook page and I’ll fill you in. 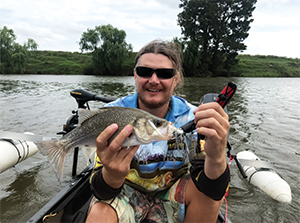