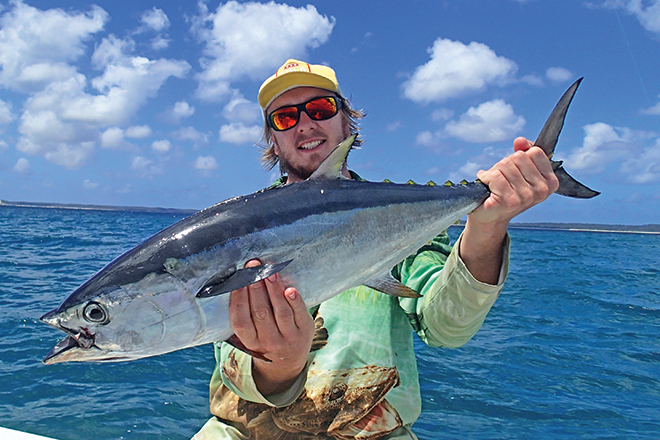 FOR quite some time, editor Ben and I had been hanging out to go on a Hervey Bay fishing trip with BNB contributor Tri Ton of Fraser Guided Fishing.

Well the stars recently aligned and Ben and I jumped in the race Astra on a Sunday afternoon to make the nearly four-hour trek to Hervey Bay from Brisbane’s bayside. With Ben at the wheel, Tri and I were flicking messages back and forth and while the weather forecast was looking good, Tri’s fishing forecast was not.

According to Tri, water temperatures skyrocketing to about 30C in preceding days had turned the fish right off the bite and spread them out across Hervey Bay’s massive expanse of water. Not exactly what we wanted to hear about an hour from Hervey Bay, but we knew Tri would put in the miles to get us the smiles.

After catching a few fitful hours of sleep in 30C heat in the weirdest Airbnb stay ever, Ben and I met Tri at the Urangan Boat Harbour ramp at 5am. Tri had advised us to bring minimal gear because he supplies everything from jig heads and rods to lunch and snacks.

Nevertheless, Ben and I rocked up with five rods between us (four Ben’s, one mine!) as well as a tackle bag each and an Esky. Ben left his Wilson Venom GT Popping rod in the car after Tri mentioned it would be too heavy for anything we’d be chasing.

While the forecast was for a five-knot easterly wind, the reality was more like 15 knots, though we didn’t expect it would give us any issues in Tri’s 6m Galeforce. After Tri expertly tied an FG knot to connect his 40lb leader to my 20lb braid, we set off, punching northeast across the big bay.

Ben and I both grew up fishing Moreton Bay but neither of us had much, if any, experience fishing Hervey Bay, so we were glad to be learning from someone with as much first-hand knowledge as Tri. Our first stop was over significant bait schools signposted by flocks of birds just 15 minutes out of the harbour.

I was itching to get my Z-Man 5” Bubble Gum StreakZ straight into the school but Tri said there was no point due to the total absence of predatory fish on the surface and sounder. So off we went, still heading northeast towards Rooney Point on Fraser Island.

I cast my Z-Man right into the thick of the action and cranked it back as fast as I could while Ben hurriedly tied on a metal slug made by his mate and old scribe Ron Mole. My plastic came back having been knocked around and not swimming correctly, and by the time Ben was rigged up, the fish had completely disappeared.

From start to finish, the action had lasted about 20 seconds. We were a bit disappointed to have missed the fish but also hopeful because we’d encountered some action. After milling around in this area for a while, shooting to and from bust-ups without success, Tri decided to leave these finicky fish behind and head right up Fraser to Rooney Point.

As we neared the point, we could see numerous flocks of birds working the surface and slashes of white water left, right and centre as mixed tuna species tore into baitfish with vigour. It was action stations for the next few hours as Ben and I landed numerous longtail and mack tuna as well as spotted mackerel.

By lunchtime, Ben had caught several longtail tuna on his ‘Mooley’ slug (aptly named by Tri) but my Z-Man had enticed nothing but mack tuna and mackerel. Throughout the day and as we chowed down on the tasty lunch provided by Tri, we talked about tactics for the species we were targeting.

Tri certainly has a lot of experience chasing Hervey Bay’s pelagics and Ben and I found it very interesting to learn from him, whether he was instructing us on our retrieves or fighting the fish close to the boat on our (sort of inappropriately long) 9’ Lox and Samaki rods.

He had a number of trump cards for us to play over the day, which improved our catch markedly. I won’t give away too much here; you’ll have to book a charter if you want to get the full run-down from the man himself!


It had been a long time since I’d caught decent size pelagic fish and I’d forgotten just how much fun it is to have your line-burning retrieve stopped in its tracks as a super-fast sportfish takes off in the other direction with your lure in its mouth.

Having not previously caught mackerel on anything heavier than 10lb gear, I was amazed at how little fight the good-sized spotties put up on our 20-30lb gear. After the initial hit and run they basically came straight to the boat before one final run boatside, so after landing a couple for the table, we didn’t cast at any more to avoid unnecessarily injuring them and potentially turning them into shark food.
However, after later eating one of the spotties with my family, I can see why they’re such a popular target right around northern Australia. Very tasty indeed! After lunch, the plan was to get me a longtail tuna before calling it a day.

With conditions worsening on our long-awaited Hervey Bay fishing trip, we headed in closer to Fraser to escape the significant wind chop before tracking south towards the harbour, hoping to spot bird activity on the way. About halfway back, we saw a few birds with the occasional boil and jumping tuna below.

Tri motored over and seeing a tuna jump clear of the water, called it for a longy. I fired my Z-Man in and Tri told me to stop the cast in its tracks because the fish was coming at the boat. I grabbed the spool to stop the cast mid-flight and the plastic barely entered the water before it was hammered and line peeled off my Shimano Saragosa.

The fight was ‘longy like’ according to Tri, but unlike Ben’s longtails, which took quite a while to get to the boat, I was pretty much poling this fish in. We were a bit disheartened, thinking it was probably yet another mack tuna, but as the fish came alongside, we realised it was in fact a micro longy; a mongy!

High fives all round celebrated our goal achieved, but before we headed for the harbour, Ben was on to yet another big longtail on the Mooley slug. This fish was absolutely jetting for Bundaberg and not taking no for an answer, keeping the drag on Ben’s Pflueger Medalist singing as it readily peeled off 30lb mono.

Tri kicked the 140hp Suzuki to life and gave chase, with Ben eventually wearing the fish down and bringing aboard a seriously solid 95cm longtail tuna to cap the day off nicely. While Ben and I had arrived with hopes of catching more exotic species such as queenfish and golden trevally, chasing these fish would quite likely have resulted in a doughnut due to the extreme conditions.

However, thanks to Tri’s knowledge and guidance, we ended up having a very enjoyable day fighting hard against good numbers of solid fish while learning several new tricks in the process. If you would like to test your skills against big Hervey Bay sportfish, I can strongly recommend a charter with Tri.

To get in touch regarding an all-inclusive trip, call 0427 230 261 or visit the Fraser Guided Fishing Facebook page.

You won’t regret it once you’ve tasted the awesome Hervey Bay fishing action!

Daniel is BNB's subeditor and occasional fish-wrangler. If you've got a great story or at least an idea for one, flick Dan an email at editorial@bnbfishing.com.au
Previous Honda Marine introduces bold concept engine at Miami International Boat Show
Next Trolling for bass by kayak