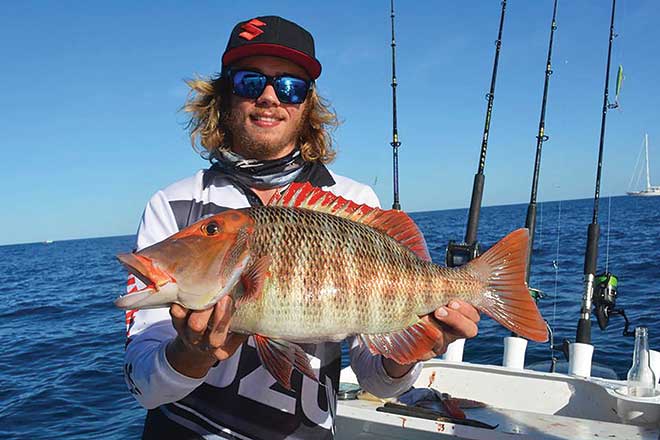 THE Bundaberg VMR Family Fishing Classic is held at Burnett Heads every year in late June thanks to the support of local businesses and organisations.

Fortunately, quality weather was forecast this year, unlike so many years VMR Family Fishing Classic events in the past. A plan soon came together and accompanied by a group of work colleagues, we set out into the darkness ridiculously early on the Saturday morning of the comp, hoping to land a prize-winner. We travelled out of the Burnett River mouth before setting our course towards an area known for deep water and big fish, which was the perfect combination for a competitive day’s fishing to come.

Skipping across a fairly calm ocean, we hoped ‘doing the miles would get the smiles’ when it came to competing with the other keen fishos who hit the water. The area we headed to was known for good numbers of cobia, a prime species to weigh in.  After well over an hour of travelling, we finally arrived at the first waypoint and were quick to deploy our baits, hoping to start the day with a pearler.

The strong current and slight southeasterly breeze determined our drift line, but with only minimal knowledge of the area we were happy to use drifting as an excuse to fish while we looked for structure on the depth sounder.

If only the fishing heated up as fast as we did, quickly taking our layers of warm clothing off as the sun slowly rose above the horizon.

Nearly an hour had passed with no sizeable fish coming over the side, let alone going in the Esky. We hopped between the nearby waypoints until we finally began catching a couple of fish, but still frustratingly not the monsters we were hoping for. At last, now with the sun high in the sky, I hooked up to something that had serious power.

Fishing in about 50m of water, I knew too well it could be the mammoth red emperor I had been dreaming of. It stripped line from my locked-up Shimano Saragosa, punishing not only my gear but my body as well. I gave it my all trying to turn the fish’s head, knowing it would run my line around anything it could, but thankfully the tense moments progressed to a steady battle.

Not giving in, the fish continually took bursts back towards the bottom but was obviously tiring as I kept steady pressure on it. Knowing the fish was nearing the surface, we painfully awaited signs of colour, continually scanning the clear blue ocean. At last a shape appeared 20m below, and as it ascended in the water column, distinct red bars came into view.

Ecstatically, I called “It’s a monster red, it’s a monster red!” but before I could say any more it took a lunge beneath the boat and went out of view. I finally brought the fish to the surface where we were all shocked to see it wasn’t a red emperor after all… but there’s no denying I had the ‘monster’ part right. A huge chinaman fish was lifted aboard, which was a total and utter surprise for all of us.

Displaying very similar fighting characteristics to a large red emperor, this fish well and truly had me fooled right to the end. Feelings of sheer excitement and disappointment were raging through me. I was thrilled to have landed a new species and a whopper at that, but almost equally frustrated because of how badly I wanted a big red emperor.

Measuring in at just over a metre in length and in excess of 15kg, the big old brute deserved to fight another day, possibly moving on to trick some other fisho. We fished into late morning, seeing the occasional legal redthroat emperor and tuskfish make its way over the side, but other than my battle with a red emperor’s Chinese counterpart, there was nothing worth bragging about.

We made another few moves, slowly accumulating a nice bag of reef fish along the way, but we wanted something big, something to make the trip properly worthwhile, so we had to keep fishing. Using a mixture of dead baits, live baits and lures, we tried everything we could until finally I hooked up to a solid fish.
Powerful runs towards the bottom had me in similar pain to earlier that day, but I had to lay into the fish to ensure it stayed clear of the rough bottom.

I turned the fish and started to regain some line when it turned into a fairly dead weight with the occasional head knock, making us think it was perhaps a big cod of some sort. Sure enough, the fish came to the surface and was in fact a massive goldspotted estuary cod. The cod measured an impressive 95cm but was destined for release, so I attempted to revive the fish alongside the boat.

Suffering from barotrauma as a result of rapid changes in water pressure during the fight, the cod was not recovering well. After carefully releasing this built-up pressure, I gave the fish one last push but unfortunately it was all too much for the big cod. Being well under the legal maximum size for estuary cod, we deemed the fish suitable for the Esky, knowing it would definitely not go to waste when it came to filleting our haul.

Soon after, we made the call to travel clear of the deep water and head for an area that featured everything from shallow reef flats to moderately deep bommies. Our first mark had us fishing very staggered coral reef that ranged in depth from 15-30m. We were hoping for reef fish such as a prized coral trout or perhaps one of the many species of emperors found in our waters.

It didn’t take long to see a sizeable redthroat emperor come over the side, but it was the trout we were really after, so we fished on. The day had moved into the afternoon, leaving our eyes weary, but the weather was improving by the minute and we just couldn’t leave such a pristine setting. We found ourselves drifting over good-looking bottom and before we knew it, my mate Ross hooked up and had a battle on his hands when the fish ran straight for the harsh reef below.

He managed to keep it clear of danger before fighting it towards the surface. Before long the beautiful big coral trout was boatside and in the landing net. Measuring around 70cm, we were hopeful Ross might score a place in the competition, but had to wait and see. The sun slowly set over the water, making for a spectacular view and a magical time to fish.

I finished the day casting stickbaits over the reef flats in the hope of a late-afternoon pelagic bite, but it wasn’t to be, so we began our journey home, making the most of the glassy conditions. Upon arriving back at Burnett Heads, we found that unfortunately none of our fish measured up to a place on the leader board, however overall it was an extremely enjoyable day on the water.

At the end of the day, fishing competitions are all about getting involved and having fun, and when they support volunteer organisations such as the VMR, it makes it all the more worthwhile. Great fun was had on this occasion, and I look forward to participating again next year.

Joel is blessed with the fish-rich coastline and waterways surrounding the Bundaberg region. With an array of options and possibilities around, he favours the shallow flats and small creeks and specialises mostly in lure fishing. Joel loves to broaden his abilities with new concepts and techniques, so feel free to email him at jmj-31898@hotmail.com
Previous Vic McCristal Sportfishing Writer Scholarship recipients announced
Next Ocean Craft Walkaround Cabin Ultra Deep Vee