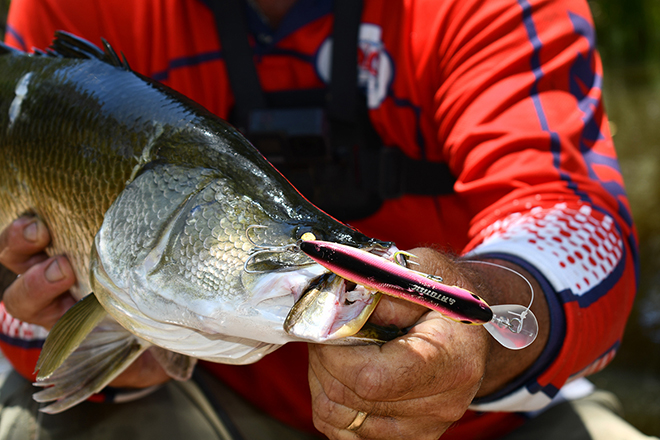 Trebles are deadly on a wide variety of lures intended for countless fish species.

Treble hooks are a triple threat

FINDING the perfect lure is an almost impossible task.

Most fishers overlook the hooks on their lures even though hooks are the most important aspect of fish catching ability. So what treble hooks should you choose when upgrading lures? With so many options available, it can be somewhat confusing trying to decide, but each has its place in a tackle box.

On any given day any lure may outperform another, which is why I assume many anglers have tackle boxes crammed full of lures in varying sizes and designs. In any case, choosing a lure comes down to four main factors – action, cast-ability, colour and durability. You’re never going to throw a lure that doesn’t swim straight or look good to you. Colour is a whole separate argument for another day.

When it comes to smaller hooks, whether you like them or not, bream anglers know their stuff. Many will add a wide gape to the rear of surface lures and small crank style lures, leaving a wide ‘J’ on the front. The theory is that when fish swipe at surface lures they are not very accurate. Due to its profile, the wide gape results in more hook-ups in the cheeks of fish that would otherwise be missed with a standard ‘J’ style profile.

It does work and is a change we make every time we use a surface lure. The wire on the wide gape is also very fine, again resulting in more hook-ups. Short shank and long shank are even more interesting changes, which when used appropriately can result in more fishing time.

This equals more active fishing time and less time de-snagging. Though there will be times when a longer shank hook could be more productive, so it’s a good idea not to apply a one size fits all solution. Similar to a lazy fish swiping at a surface lure, sometimes fish are simply not energetic enough to chase down lures. In this situation, anglers may try changing the rear treble hook on their hard body lure to a wide gape or a long shank treble.

More hook hanging off the lure will result in more hook-ups because fish will have a lazy grab at it. The wide gape is more effective as the points are more pronounced. The long shank has more hook hanging off, therefore a fish has more chance of finding it. When anglers notice fish only just pinned on lures, they may assume a colour change to be the only solution. Though a longer or different treble hook might produce more fish rather than a different colour.

Bigger trebles are a different kettle of fish. The heavy-duty hooks of the treble world are 3x and 4x strong. Most are a ‘J’ style but feature beefed-up wire and are designed for tough adversaries such as barramundi, kingfish, mangrove jack and giant trevally. I re-learnt a valuable lesson recently. I hooked a large coral trout on a popper and after a torrid 10-minute battle over coral the line suddenly went limp.

I could still feel the lure on the end so I wound it in to discover two straightened hooks on the front treble. Devastated! If only I’d changed to a more suitable and stronger hook, I could have caught that fish. It bugged me all day, particularly as I had spare 3x strong treble hooks with me at the time.

For anglers chasing the thuggish GT there is another hook selection – the GT Recorder. These massive trebles are as tough as they get and are barbless for easier release of special sportfish. Suitable for large poppers, the GT Recorder is the pinnacle of treble hooks. Specialty hooks such as Magic Eye can also be useful and are designed around allowing anglers quick hook changes without the need of split ring pliers. Magic Eye refers to the eye of the hook having a flattened section, which can be used to part the split ring and thread it on with ease.

These hooks are 2x strong and capable of dealing with all but the toughest fish. Fine wire trebles are also a good investment when hook-ups are failing to convert because they will find a home easier in the jaws of fish. What colour? I personally don’t take the colour of treble hooks into consideration – nickel, black and silver are the most common colour of hooks found on lures in my tackle box. My feeling is that a fish is going for the lure, not the hook, so colour is less important than selecting the right shape and gauge.

What I always use is a high quality chemically sharpened hook because I believe these will give me the best chance of converting hook-ups to fish. Next time you pull a lure out of your tackle box, take a moment to think about the hook and whether the standard treble hook is appropriate for the job. Unfortunately, for fishers nothing compares to the utter devastation felt after losing a trophy fish due to hook failure.