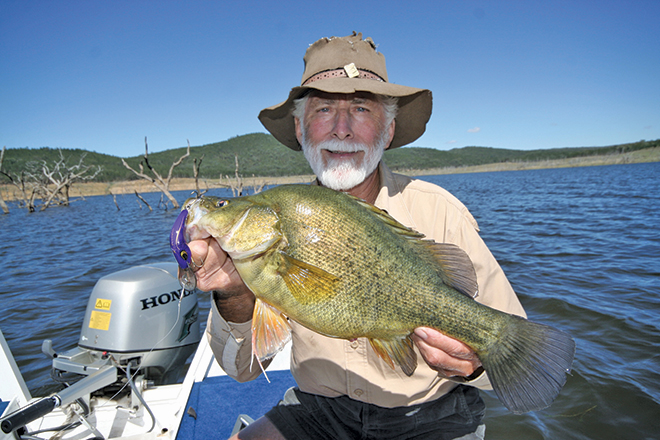 Kevin Clark, one of the designers of the original Downunder Boomerang lure, put his product to use to troll this excellent specimen up.

Being a dedicated freshwater angler, one of my favourite pastimes is chasing the golden perch residing in many of our stocked impoundments. Trolling golden perch

The first step in our quest for goldens is to select a location. Trolling golden perch

Not all impoundments will suit our needs.

As an example, Leslie Dam near Warwick supports a very successful golden perch fishery, however specimens under 1kg are most common there.

You’ll need an impoundment with a good population of bony bream and crayfish.

Many fishing publications and local newspapers run a fish of the week or month column.

It’s easy to take note of any lake that repeatedly yields big goldens.

Once you have selected an impoundment close to home – and there are plenty to choose from, scattered throughout the eastern states – you’ll need to decide what time of year to begin your quest.

Success rates climb with the temperature – from the early spring pre-spawn activity through into late summer.

As the water temperature increases, so does the fish’s metabolism and it needs to feed more frequently.

My preferred method for taking goldens is to troll deep running lures.

Bait fishers do catch large goldens, but they also spend a lot of their fishing day catching smaller golden perch and other unwanted species.

By sticking with big lures, you can to a large degree avoid the smaller models and almost totally avoid small bass, which can become quite a distraction.

Another significant advantage of using big lures is the regularity with which cod are encountered.

I am often asked which lures are my favourites for big goldens.

If I were forced to pick only one, it would be the 80mm Boomerang – it having caught a lot of good fish for me over the past 40 years.

It represents a happy medium by being large enough to scare off all but the most suicidal bass, yet not so big that it becomes uncomfortable to troll on medium tackle.

On the subject of tackle, I recommend 3-6kg gear with a good high modulus graphite rod to make towing those deep running lures less fatiguing.

I always use overhead plug reels, though spin reels are fine if that’s your preferred style.

Trolling speed should be as slow as you can travel and still have your lure throbbing away strongly.

You’ll need a sounder of course, but there’s no need to mortgage the house for a super high definition whizz-bang unit with a screen the size of your TV.

All you require is water depth and, depending on location, the means to avoid submerged weed beds.

OK, it’s early summer, the barometer is hovering slightly below ‘bleeding from the ears’ and it’s warm and sunny, with enough of a northwesterly to put a ripple on the water.

You have your favourite chartreuse ‘big-lipped-deep-divin’-git down’ clipped to your new Zane Grey 4kg outfit and you’ve just launched the boat into 3000ha of water that all looks exactly the same.

So, where do you start?