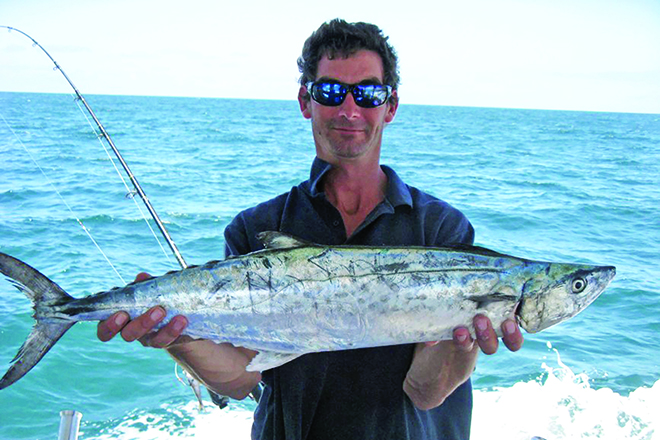 HERE’S a rundown of my two months fishing Moreton Bay, mainly targeting pelagics and whiting (I did very little reef fishing), with most of the departures from Whyte Island and Manly.

The end of December was the beginning of our two months fishing Moreton Bay and the lead-up to the new year got off to a good start, with plenty of whiting all over the bay from the close banks at the small boat channel to the Rous Channel, mostly in the shallower water to the south and Amity Banks (in the legal areas).

Plenty of whiting were also being caught at the go-slow beacon in front of the Moreton Island Sandhills. Doggy (school) mackerel were still around. If you could not find them on the surface, using paravanes and spoons worked, especially on the smaller tides. They were around Hope Banks, the north and western sides of Peel Island and the middle of the Rainbow Channel down to One Mile.

The mackerel seemed to be holding off many of the drops-off north of Peel and in the Rainbow, waiting for the bait to come off on the ebb tide. Squire and sweetlip were about in good numbers around Peel and Green, and outside the green zone at Saint Helena Island.

Mud Island and the Wellington Point drop-off produced nice squire, grass sweetlip and a few tuskfish. Spotty mackerel were sporadic in the northern bay. Reports of success came from the Pearl Channel and around the top entrance to the Pearl.

We went for a look for two days and only found them on the second day between the bottom of Bribie Island and the entrance to the Pearl. Just a warning if fishing with kids along the shoreline. Heaps of stonefish have been caught in the shallows in the past couple of months.

At the beginning of January 2020 we’re a couple of weeks into our two months fishing Moreton Bay. The doggies were very quiet, with only a couple of small ones in the basin at Peel, but huge whiting on the banks towards the oyster leases.

Some nice snapper were captured at Green Island. A mate sent me a photo of a decent snapper head, with the remainder taken by sharks. On the shark situation, the bay and Brisbane River are full of them at present. I’ve never seen or heard of so many in the bay.

About three weeks into our two months fishing Moreton, I enjoyed a nice day on the bay. By mid-January, the whiting were in big numbers in the small boat channel halfway towards the yellow beacon on the drop-off to the banks. Tiger squid were hungry and chasing the whiting being pulled into the boat. I have had a couple of good days chasing whiting and squid, but you have to watch the afternoon northeasterly wind. One day it was predicted to be 10-15 knots but ended up around 20 knots and caught a lot of boats out, giving us and many more one of the roughest return trips for quite some time.

Earlier in the day the doggies were very quiet and looking at the big tides and dirty water, I can see why the spotties couldn’t be found, even with all the bait schools around. The flocks of mutton birds were in and waiting and tonnes of whitebait and frogmouth pilchards were around, so it was just a matter of time. The shallow reefs fished well for squire, grassies, the odd tusky and cod.

Coinciding with the completion of one of our months fishing Moreton, we had a beaut day on the bay, with a gentle southwesterly wind and then a glass out until the northeasterly kicked in around 4pm with the tide change. Plenty of whiting were on the southern side of the Chain Banks, especially when some run was in the tide.months fishing Moreton

I also picked up a couple of legal schoolies off Green Island on the run out. We caught 10 others but they were undersize. Two more were boated on the way home near Green, as were two 40cm squire. Heaps of toadfish were about. Apart from reef and whiting fishing, everything else will slow due to the water being very brown.

With the strong wind persisting in the bay at present and combined with the murky water, pelagics have been hard to find. I’m hoping to get out and chase some spotties as soon as the water clears.

On another trip in late-January, about one and a half months fishing Moreton Bay, we managed a few hours on the water until the wind started to howl around lunchtime. To my surprise, the Bay was a lot clearer than what it has been. We managed some nice snapper from Mud before hitting the paddock looking for pelagics. A few tuna schools were about but we couldn’t find any of the toothy variety in decent size. We found a couple of schools but all were undersize.

Several days later we headed further south and found doggies on the southern side of Hope Banks on the way to our whiting grounds. Plenty of whiting were to be had on the legal side of Amity Banks and the small boat passage, as well as a few squid to complete the day’s catch. They were climbing over each other to get to the pink and orange striped jigs.months fishing Moreton

Lots of tuna were also working wide of the Sandhills and in the green zone. Whiting remain in the small boat channel and all the way along the Maroom Banks (though make sure you are clear of the green zone). Squid are in the Rainbow along the weed beds from Amity to Dunwich. A few nice reefies are on the Myora side of the channel. Some tuna schools have been breaking the surface in the Rainbow but we haven’t tried catching any.

On this trip we continued up the Rainbow and came out through the Rous to meet with a few tuna schools. We tossed a few chrome lures and managed a couple, though it was hard to get them to take any sort of lure. Heading out again on the Sunday with a thousand other boats, we left from Whyte Island and headed across the top of Mud into the paddock and were in luck, finding a school of spotties midway across to the Sandhills. We managed five between two of us. They were finnicky in taking chrome slugs.

After they disappeared, we headed to the Rous and into the Rainbow looking for more but without any luck. Instead, we hit the weed beds for squid and found them out in force. It didn’t take long to get our fill of good size tigers. We cut across the top of Peel to Green to see if the squid had turned up there too. Managing three small ones, I don’t think it will be long before the bigger ones turn up.

Next was a midweek trip across to the Four Beacons, mainly targeting pelagics. We dropped crab pots around the measured mile. The beacons were quiet, with only one doggy coming on board.months fishing Moreton

Off to the Sandhills we went, only to be met with tuna schools, so we turned about and headed back up the shipping channel. To our surprise, just past Tangalooma we found a school of spotties and had some fun, landing eight between the two of us.

Coming to the end of our two months fishing Moreton, we spent most of the day sheltered by the island until we cut across the bay back to the Brisbane River. Once out of the shelter of Moreton Island we were hit by strong northeasterly wind, which made pulling in the pots a bouncy affair. Even though the trip back was bumpy, at least we were running with the wind.months fishing Moreton

We had a pretty good couple of months fishing Moreton Bay over the summer, so let’s hope autumn continues with the same and the northeasterly wind doesn’t come in with great gusto. If you’re into prawns and can throw a cast net, Hayes Inlet, the Pine River and the powerlines near the Logan River have been giving everyone their bucket load.