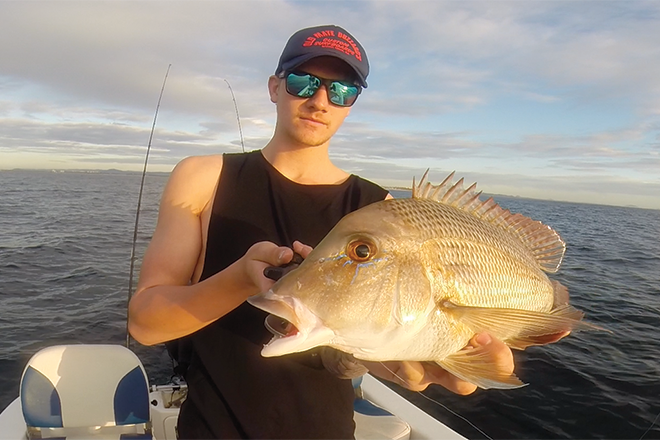 ALL through the working week I had been planning a fishing trip offshore because conditions were looking mint.

I had teed things up with my mate Nick to take his boat offshore bright and early on a Saturday morning. We decided to chase pelagics and reef fish using soft plastics and a variety of other lures while the weather was playing the game. Once we reached our first GPS mark, we began throwing around the plastics.

Most people fishing for snapper and other reef fish will throw bigger plastics in 5”-8” sizes, however Nick and I have found fishing with slightly smaller plastics of 3”-4” works a treat on the reef fish. We find letting our plastics hit the bottom is the biggest key to success. Engaging with the bottom will result in more bites and a lot more hook-ups, so finding the right jig head for your plastic is a must. We were fishing in 15-20m of water for most of the day and found a 3/8oz jig head worked well.

Sometimes having too heavy a jig head will lower the lure’s effectiveness. Anyway, on the first cast of the day Nick hooked a solid grass sweetlip. He was using a Z-Man 3” MinnowZ in Opening Night colour. While our lures were sinking, we’d check for any sudden movements in our line, which would indicate a fish striking the lure on the drop and can happen regularly. After a fun battle on light gear, I netted Nick’s grassy, took a quick picture and put it straight on the ice.

It was such a beautiful morning, especially landing the first fish while watching the sun come up. We knew we were fishing the right spot as not only was the fishfinder showing a good reading of fish but we kept getting hits while flicking our lures. I was next to hook up and it was fighting really well on my 2-4kg rod. I was throwing Z-Man’s new Trick ShotZ for something different and it worked. My fish ended up being a solid grassy that was a keeper as well.


As the day went on and we continued landing many more grassies and other smaller reef fish, we decided to head off to see if we could land a tuna before pulling the boat out of the water. With no luck in hooking a tuna, we both stopped fishing for a second and took in the awesome glassed-out conditions. While enjoying the moment, I said to Nick: “Did you see that thing on top of the water over there?” Before I could even think about casting, Nick’s lure was already in the water, so I cast slightly further than him towards the weird-looking fish.

I could not believe what happened next.

Zzzzzzz, line was absolutely peeling off my Shimano Sustain 2500-size reel on my 2-4kg rod. It turned out I was battling a marlin. Yes, a Marlin! It was jumping and doing all sorts of wicked stuff, so I asked Nick to grab the GoPro pronto and Nick was able to film the whole fight. Well, the whole 10 minutes before the hook pulled.

I could not believe I had hooked a marlin while chasing tuna with a metal slug. It was the coolest fishing experience of my life. And while only small, the power of this fish was insane. I was annoyed I lost it but so happy to experience it at the same time. We both had a ball filming and doing something we love.

As you can see in the photos, we were wearing my newly designed T-shirt and singlet. I have my own Facebook page called Flick Strike Fishing and a YouTube channel of the same name. I created the Facebook page about three years ago simply because I absolutely love getting out on the water and exploring what our country has to offer, especially with good company. If you would like to watch the marlin action or any of my other videos, feel free to subscribe to my YouTube channel and follow my page on Facebook to keep up to date with my adventures.