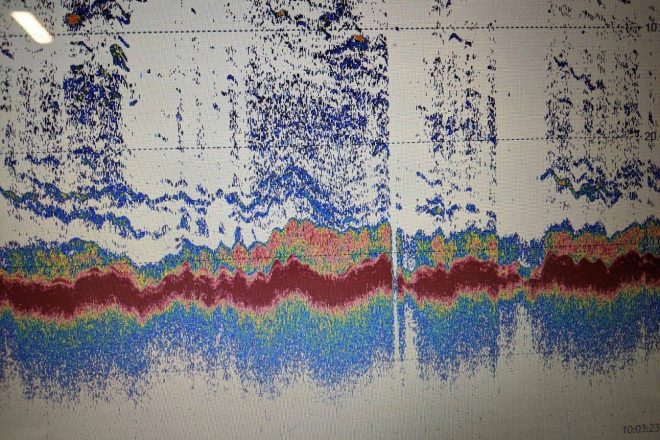 In a first for Australia, active acoustic equipment (echosounder) and unBaited Remote Underwater Video (uBRUV)cameras have been used together to assess snapper stocks as they aggregated to spawn in the waters off the northern end of Bernier Island.

For the past three winters, these waters off Shark Bay have been closed to fishing for pink snapper from June until August, as part of a range of management measures to protect the fish as they spawn, and help rebuild stocks. DPIRD staff and an acoustic scientist from the CSIRO were at sea in the closed area recently, using high tech echosounder technology in combination with uBRUV cameras to assess fish numbers and map seabed habitats.

Acoustic methods are used around the world to assess fish stocks by using an echosounder to send a pulse of sound down to the seafloor. If the pulse encounters a school of fish, it is reflected back as an echo. This is then displayed as a two-dimensional picture known as an echogram, which shows a region of the water column both horizontally and vertically.

The Bernier Island acoustic-uBRUV survey is part of a larger Fisheries Research and Development Corporation funded project looking at the relationship between snapper in the waters of Shark Bay and further south down the west coast of Australia. The waters off Bernier Island will reopen for pink snapper fishing on 1 September.

Click here to to get some insights into snapper genetics