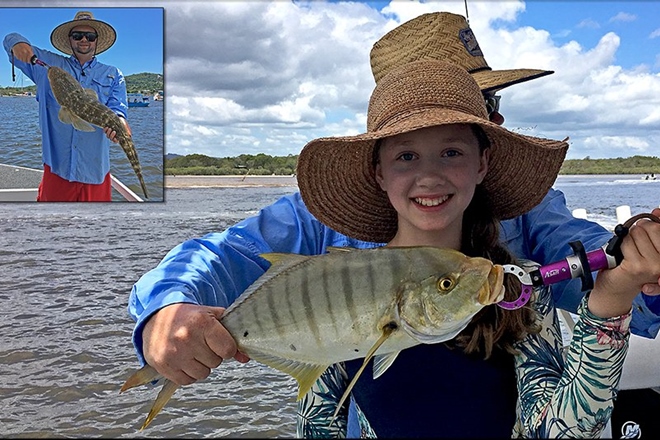 Ben Newman and his daughter Georgia from Sydney (above) caught and released a 67cm flathead and 53cm golden trevally while on Tuesday's Noosa River Fishing Safari. Photo: www.fishingnoosa.com.au

With the warm summer evenings, anglers who fish Noosa’s famous river are being rewarded with great catches of quality fish. Upriver, the jacks have been feeding with ferocity, live bait is one of the most productive, fishing late afternoon and into the evening on a run out tide and your chances of seeing a red devil are high. If flicking lures is your thing, there are some new lures on the market that are really firing them up. The new Flick Prawn in the Chasebait range has been slaying them, these prawn are incredibly realistic and are made from the 10x material for that durability. They come in two sizes and a great range of colours perfect for the job. Down river, Woods Bay and the back of the sound, small soft plastics and micro jigs have been the go when chasing trevally through the day, with poppers and surface walkers producing in the low light periods. For the bait anglers mullet strips and bonito strips have been working well. Flathead are in great numbers in the lower section of the river and have been feeding on small fish baits like hardy heads, frog mouthed pilchards and whitebait, fishing the run out tide seems to be the most productive. Whiting have also been in good numbers and have been feeding on yabbies, worms and pealed prawns, with the dog beach and Gympie terrace always a good fish for the family. Crab continue to be caught with some good catches reported, pots baited with fresh mullet seem to be producing.

Offshore; Sunshine Reef has really fired up over the last week or so with mixed bags of sweetlip, coral trout, tuskies and squire. Shimano Colt Sniper Wonderfall micro jigs have been a standout on the trout and sweetlip as they mimic an injured bait fish as they flutter down. North and Chardon’s Reefs have seen some good size dolphinfish (mahi mahi) cobia, maori cod, pearl perch, jewfish, venus tusk fish and bar cheek trout being caught. Spanish and spotted mackerel are pretty much on every reef out of Noosa at the moment, they are hitting slow trolled dead baits, try using a Chin Guard to keep the bait from spinning and give it a realistic look. Another option is to troll diving high speed lures like the Nomad DXT Minnows or the Samaki Pacemakers, both these lures can be trolled at up to twelve knots perfect for those fast moving spanish.  Those that have made trip up to the Reef off Double Island and out to the Barwon Banks have been well rewarded with Dolphin fish, cod, coral trout, cobia, pearl perch and snapper. There is a lot of currant out on the wider reef at the moment, so ensure you stock up on heavy sinkers if bottom bashing.

On the beaches; Noosa North Shore has again been inundated with angler in 4×4 heading up for a spot of fishing, whiting and dart have been in most of the close gutter on the incoming tide, freshly pulled live worms have been the pick of the baits with pippies also working well.  On the southern beaches around Sunshine and Marcus beaches good school of whiting were targeted with angler bagging out on legal fish. The dart are pretty much everywhere and it can take a bit to get a bait past them. For the night anglers Jewies and large tailor and also on the cards at the moment, large flesh bait like bonito and mullet have claimed some cracker fish. The rock hoppers have also seen plenty of action this week with early mornings being the best before the winds get up. Sweetlip, pan sized snapper tuna and spotted mackerel have all been claimed this week.

In the fresh water; Bass are very active in Lake MacDonald around the bubble trail and deeper holes and drop offs, spinnerbaits and small hard bodies are working well, as well as 2.5-3.5” plastics including Zman Slim Swimz and Fuze Triple tail on 1/6th jigheads. Borumba Bass are again sitting deep around the boat ramp and along the float line. Cast around the entrance to Yabba and Kingham arms with Entice assault vibes and Ecogear ZX35 blades has seen some outstanding results. For the early morning bit try Cultiva ZipnZiggy, Strada Zedia Walkers and Jackson Risk baits.