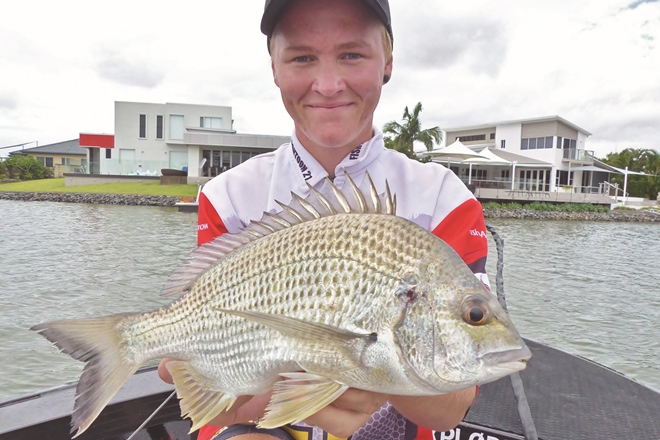 This bream was hooked while cranking a rock wall.

MARCH kicks off autumn, which means the days will start to get shorter and the hot and humid days will become rarer.

The fishing action will remain hot in March because water temperatures are still going to be over 25C in the estuaries and predatory fish will continue to be aggressive.
In the salt, mangrove jack have been popping up more and more and they’ve been hooked with various techniques. By far the most exciting way to target these fish is to use surface lures. Walkers such as the Damiki Rambler and Lucky Craft G-Splash are favourites of mine.

Casting around structure such as fallen trees, pontoons and rock bars has been most successful early in the morning and late in the afternoon, with a combination of fast and slow retrieves enticing the strikes.
The most important factor in capturing these fish is spending time on the water because they can often be extremely tricky to entice. When chasing jacks I run a 3000-size Daiwa Ballistic EX reel with 30lb braid and a 3-8kg rod.

I use such stout gear because these fish are renowned for busting people off on the nearest piece of structure they can find and you need to be able to turn their heads and keep them away from anything they can use to their advantage.

Another fish around in thick numbers is bream. The technique that has worked well for me when chasing bream is slow rolling cranks over rock bars and around pontoons. Fishing for bream in clear water can often be quite difficult, so using light line such as 4lb can help dramatically.

In the fresh, places including Hinze Dam have seen a dramatic increase in the number of saratoga caught. Saratoga like warmer water, and many have been found closer to the water’s edge where water temperatures are highest.
These fish normally feed in the top of the water column and often take surface lures and shallow cranks but they will also hit spinnerbaits intended for bass.

The easiest way to find saratoga is when they roll on bugs or make a surface disruption with a flick of their tail. Once hooked, keeping them on is a challenge because they have very bony jaws and can sometimes put on an aerial display in an attempt to throw the hook.

As for the bass, they are still taking surface lures during low-light periods but the standout technique in my experience has been slow rolling spinnerbaits.
Damiki Short Strike Spinnerbaits in 1/2oz have produced the best fish because the heavy weight seems to quickly get deeper to where the fish are holding. When fishing around submerged timber, it is common to get bites after your spinnerbait bumps the sticks.

Don’t hesitate to get out for a flick this month because the fishing for those warmer-water fish will be productive.