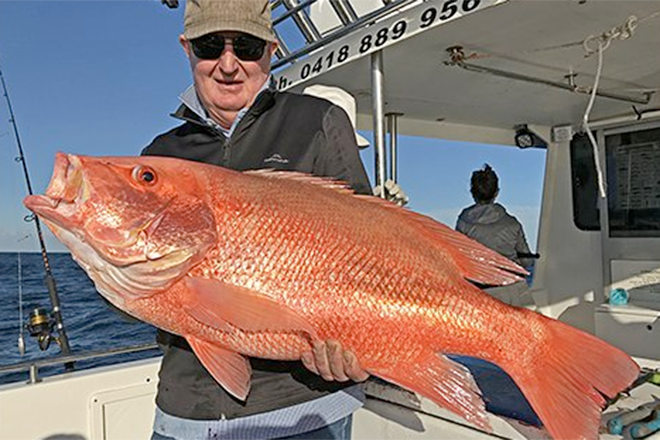 With the breezes mainly blowing offshore over the weekend most offshore anglers keep to the closer reefs, some larger craft ventured to the outer reefs and found they where really firing. On North Reef There were good numbers of snapper being taken on Micro Jigs, the 40 – 50g sizes seemed to be doing the job. The Blue Blue Sea Rides are a great jig with that perfect slow jig action that works well for bigger sweetlip, pearl perch and snapper.

Large strip baits like mullet fillet, slimy mackerel fillet and squid baits on paternoster rigs with 4-6oz snapper sinkers have been the standard baits and working well, lightly weighted whole pilchard baits floating down the burley trail have also produced some bigger snapper. There are some good schools of bait showing on the sounder at the moment so make sure you have a good supply of bait jigs. The Barwon banks and the Hards have been fishing extremely well for pearl perch, snapper, cobia and jew making the long trip from the bar well worth it. A little closer to home mixed reef species like parrot, sweetlip, cod and squire have been keeping anglers happy at Sunshine Reef along with some quality coral trout still hanging around. The odd mackerel and tuna are still being taken around Halls Reef even with water temperatures dropping.

On the Beach it is all about the tailor, with good quality fish a fairly common thing. The hot spot has been north of Teewah, Sunshine and Marcus Beaches with some good fish taken on the high tide. Good quality bait is the key so those old pilchards that have been in the freezer since last year will not do, make sure you head to any of our Davo’s Stores and get some good quality baits to increase your chances of a good feed. Taking plenty of mates with you is also key, as the more baits in the water the better as the schools will hang around and feed. Fishing those closer gutters during the days has also produced, with whiting, bream and dart taken on worm’s pipes and yabbies’. Cast to the back of the gutter and roll those bait under the white water to get the best results. For the rock hoppers; fishing bigger stickbaits like Shimano Rock Slide and Fish Inc Flankers cast off the headlands of Double Island Point and Noosa National park has seen catches of longtail tuna, queenies and the odd large dart.

In The Noosa Rivers we have had an outstanding bream season. This time of year they school up in big numbers as they spawn and are willing to take a wide variety of lures and baits. When targeting bream on soft plastics jig head selection is quite important, as you want the lure to sink fairly slowly and stay in their face, another great option is the very popular Cranka Crab, these crab have to be one of the most realistic profiles on the market.  Dropping your leader size too will see better numbers, most anglers opt for a 3 to 6lb leader when targeting these wary fish. If you want to soak a bait for a bream, fresh strips of mullet are pretty hard to go past. Elsewhere in the River, the Noosa sound has been providing some spectacular surface sessions lately, with good schools of tailor and trevally schooling up and smashing bait fish.  Surface lures in the low light periods have been perfect with both popper and surface walkers getting the job done. Flathead numbers are also improving with plenty of fish taken in the shallower water, these fish will congregate in these areas as the water is that bit warmer. Fishing the run out tide with plastics or shallow diving lures should see you with a feed.

In the fresh water, Lake McDonald Bass have been schooling up around the deeper drop offs out from weedy bank edges. Surface walkers, ¼ ounce spinnerbaits and hot bite gang banger G2 lures have been the go to early morning and late afternoon. In Lake Borumba: Saratoga and Bass are also being caught on surface walkers and Bassman spinnerbaits. Lures: Duo Realis Pencil 95mm, Lucky Craft Sammy 65. Smaller spinner baits cast into weed edges and worked back working very well.