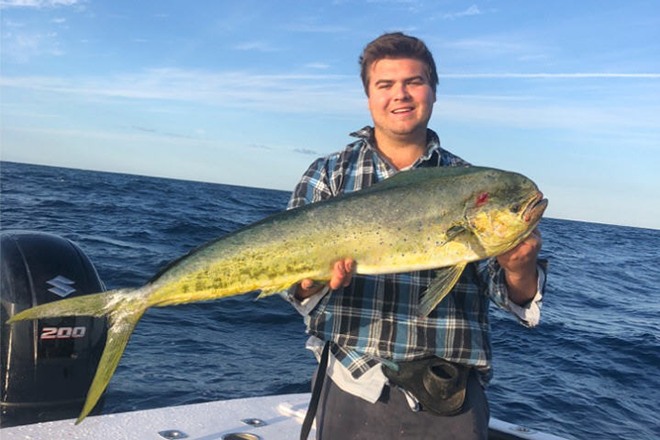 Pierce Jeffrey with a dolphin fish he caught off Bundaberg recently.

BUNDABERG OFFSHORE
With the offshore forecast for the Bundaberg area not looking too flash for the weekend, it may be time to do some boat/trailer maintenance. If you were one of the fortunate ones who got offshore during the week, you would have done well. Good tides made for great fishing and plenty of quality fish were caught. Red emperor, coral trout, sweetlip, parrot, cobia and some beautiful dolphin fish were all caught and we have finally started to see some snapper being caught as well, so better late than never.

INSHORE REEFS
Places like the Two Mile Reef, Ryan’s Patch and the Cochrane Artificial Reef have still been producing both school and spanish mackerel as well as some quality grunter, squire and a few big grass sweetlip.

THE BURNETT RIVER
There is still plenty going on in the trusty old Burnett, with plenty of school mackerel and a few tailor around the mouth. All the major rock walls are still covered in bream with most being caught on soft plastics. There is a good number of large flathead on the sand bars, but please remember that flatties have a maximum size of 75cm, as a fair few of the flathead caught have been over-sized. Further upstream there is still a few big grunter and blue salmon about, with soft vibe lures doing the damage.

BAFFLE CREEK AND THE KOLAN RIVER
Both Baffle Creek and the Kolan River are firing with the mouths being the hot spots. Tailor, trevally and queenfish are plentiful and are great target species to catch on soft plastics. Most of the sand flats are holding good numbers of flathead and whiting with making tides being the best. Further upstream on the rock and gravel patches are good numbers of grunter and bream. There are still a few jacks about with most being caught by live-baiting.

THE ELLIOTT RIVER
The mouth of the Elliott has seen plenty of dart and whiting getting about. Further upstream on the rock has seen a few cod and an odd jack, and with the cooler water temperatures, live-baiting is the way to go.

LAKE GREGORY
This lake is really hard to get into at the moment due to more than average low water levels making it impossible to put a boat in, so we will keep you updated.

LAKE MONDURAN
Reports have been slow due to the cool weather, but the few days of stable weather during the week saw a few barra caught, with a few barra to 80cm coming from out of Bird Bay and the north arm of section “B”. Small lures are still the go with the trusty old Squirrel and Snap Dog lures doing the trick.