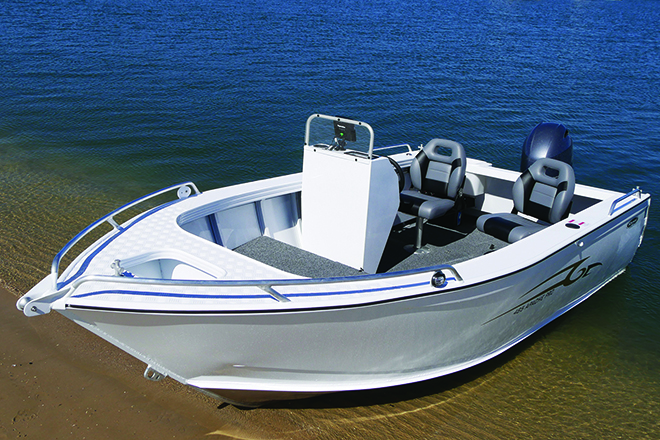 The side console layout provided plenty of room.

HAVING owned and fished out of a side console for over 10 years, I have a bit of a soft spot for this style of boat. The reason I feel this way probably relates to how I use the boat, which usually involves fishing two or three-up with a mix of casting and trolling lures or bait fishing, crabbing and family activities.

So, when I got the call from Will Lee at Yamaha saying he had the new 75hp Yamaha four-stroke on the back of a Stessl 485 Apache Pro, I was more than keen to go for a run and test out this sweet-sounding package. Apart from being a side console, it also had the new 75hp Yammie on the back, which I hadn’t had a chance to test yet, and it had been a while since I’d jumped aboard a Stessl, so it was a win-win for me.

Though badged a 485, the Stessl had an overall length of 4.95m and a good size beam of 2.2m, which provided plenty of room to easily move about. In terms of material thickness, the sides and bottom were both 3mm think. More and more manufacturers are choosing ‘plate-look’ sides, which is exactly what Stessl has done with this model, and it really does lift the appearance in terms of a modern, tough and sleek finish.

As mentioned, this boat was fitted with the new Yamaha 75hp four-stroke, but the maximum rating is 80hp. The 75hp is a new-generation engine with a big displacement of 1832cc and is based on the very popular and proven F115B four-cylinder power unit.

Combine this power with reduced weight and increased fuel efficiency compared to previous-generation motors and you have a potent package that is going to perform more than adequately and won’t break the bank in terms of purchase price or at the bowser.

Something to consider when weighing up your boat-buying options and comparing prices is the list of standard inclusions. In this instance, the only options on the boat tested and pictured are the sounder, accessory kit and paint. So, standard fit are the bow rails, navigation lights, bowsprit, bollards, side pockets, four seat bases, plumbed live bait tank, underfloor storage or kill tank, sizeable 80-litre underfloor fuel tank (and the list goes on).

The beauty of this is these are all things you really should have in your boat and here they are, without the extra price tags. Additional standard features that make this a well-appointed fishing boat include the raised front casting platform, which has ample storage underneath, and a solid side console with plenty of room for gauges and electronics.

The Apache Pro also has a full transom, which gives the boat a more solid and safe feel and means you can fish in more trying conditions without the worry of waves coming over the back of the boat. The rear duckboard is quite large too, which allows for easy boarding, and the transom has a plumbed 30-litre live bait tank incorporated as standard.

In terms of performance, the 75hp Yammie punched out some impressive numbers. With two people on board and a full underfloor fuel tank, the boat easily jumped onto the plane and accelerated quickly once over 2500rpm. A quick adjustment of the trim and you were well on your way to a top speed of about 65km/h.

As mentioned, the new 75hp is more fuel efficient and this was evident during test usage, where at wide-open throttle on this boat it averaged over 2km per litre. However, if I backed off to the most economical sweet spot in the rev range (3500rpm in this case), the motor achieved a phenomenal fuel efficiency number of over 3.7km per litre.

Not bad at all considering at those revs we were also moving along at a tick over 37km/h. It’s worth noting you can increase the revs to 4500rpm and still average over 3km per litre, but in this instance scooting along at about 50km/h. These are genuinely impressive numbers, and I think almost all fishos would be more than content with the 75hp’s performance.

Overall, the finish of the Stessl was very good, with fully welded side decks giving it a tidy look. I’ve said this before, but being built like this not only looks better, it also adds to the longevity of your boat. Other notable positives were the comfortable seats and good driving position, large side pockets and while not fitted to the test boat I would look at adding some vertical rod holders around the console to provide some out of the way storage.

For more information on this boat and others in the Stessl range, check out stessl.com.au and give the team at Bluefin Sports in Rockhampton a call on 07 4922 2211.