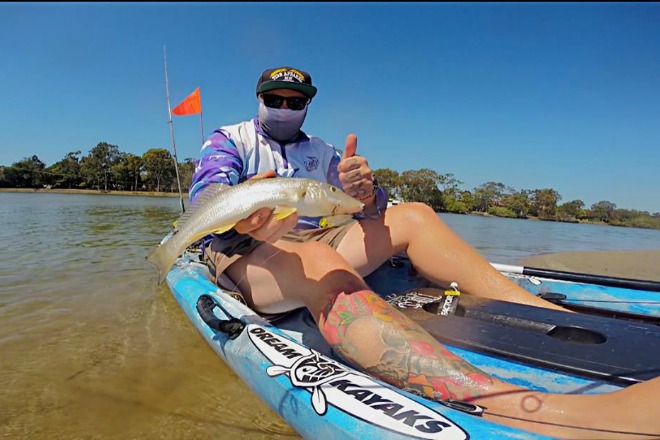 A nice whiting that couldn't resist my atomic pop 50

Whiting Fishing Fun on the Flats in a Dream Kayak

HEY readers, my name is Steele and I’m from the northern Gold Coast. Most of my fishing consists of chasing jacks in my Angler’s Dream 3 kayak from Dream Kayaks.

The muggy part of summer well and truly set in during February and the overcast, stormy days look like they are here to stay for a while longer. I hope you had a productive summer on the water, whichever species you were chasing.

February and March bring the best surface bite times of the year. I’ve been waiting for the rain to make the creeks dirtier and now finally the prawns are running. While it’s tempting to throw those big Lucky Craft G-Splash lures around, don’t forget about one of the most aggressive feeders in our estuaries: whiting.

Whiting are often regarded as a frozen prawn-snatching, bread and butter fish, but when chasing a surface lure they transform into a wild aggressive beast, especially when it’s a 40cm-plus model that has no intention of giving your lure back. Shallow sand flats up to about a metre deep are your best bet, with the ledges and drop-offs usually holding the fish. The days I look for are overcast and humid, which we are sure getting a lot of now. I don’t worry too much about the dusk and dawn low-light periods.

If you get to the spot and see prawns flicking across the surface and silver flashes amongst the madness, just fire your lure out there, remembering to bring it back with the current to maximise your chances.

In my opinion there is no better way to chase whiting than by kayak. The ability to get right up in sometimes 10cm of water and keep going is invaluable.


You can cover lots of ground drifting, but don’t rule out jumping out of the kayak and beaching it or tying it to you so it doesn’t float away and continuing to wade the flats with your kayak by your side.

The gear I use consists of a light 1-3kg, 7’ rod and 2000-size reel with a smooth drag. The most important part here is the line. For the best chance of hooking up you need to be able to cast a huge distance with light poppers and stickbaits. I use Gliss Monotex 12lb main line.

While this might seem heavy, I assure you this line is incredible for casting. For leader I use 6lb fluorocarbon. While for most topwater purposes mono leader is better because it floats, I like to work these lures fairly fast and think the heavier fluoro leader helps to keep the small poppers tracking properly.

My favourite lure is the Atomic Hardz Pop 50 in Yellow Chartreuse because it casts a mile, tracks well and has a great action. Plenty of great surface lures are out there including the Bassday Sugapen 70F, Rebel Pop-R, Strada Viral and Storm Gomoku Popper to name a few. I also like to throw a Cranka Crab behind me when drifting because it is usually inhaled with minimal effort.

The best retrieve for whiting is actually quite easy, even if you’ve never used surface lures before. You simply want to keep the popper running across the surface. Don’t stop if you get hits or see boils, just keep it going.

Employ either constant quick pops or a skittering retrieve across the surface with a consistent wind and vibrating rod tip to get the lure to spit water. The key here is to try to emulate a fleeing prawn skittering across the surface. When a whiting hits, don’t strike. Instead allow it to take the lure and run.

Keep your drag super light because it’s easy to pull hooks on these fish. Their mouths are designed for scavenging along the bottom in search of crabs, worms and yabbies, so most hook-ups won’t be in the mouth and could be anywhere on their head or body.

If fishing with a mate and one of you hooks up, don’t be shy about putting a cast in behind them because a few whiting are probably swimming there and fighting over the lure. You will also pick up great by-catch if you throw in a pause here and there. You’re sure to have a bream or trevally jump on but my most memorable by-catch was an 80cm flathead that gave me hell on light gear and came in with one treble of my little Pop 50 hanging out of its mouth along with a small trevally hooked on the other.

I think whiting are one of the tastiest fish around so don’t mind keeping a couple for a fresh dinner.

You tend to pick up the bigger, better-fed models when fishing surface, so remember to limit your catch and only take what you need.

I hope I’ve given you some useful tips for chasing these amazing little sportfish, and I hope you take a chance at having fun while fishing after a summer of stressing over jacks and pelagics.