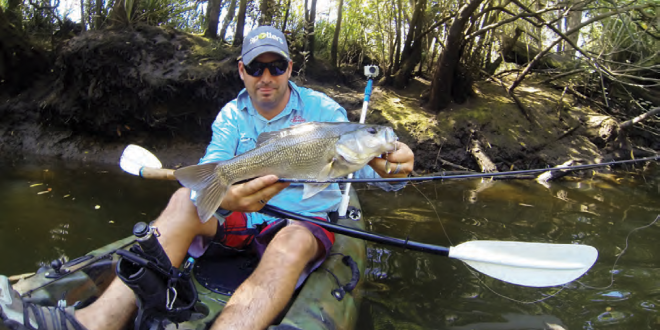 A solid skinny-water bass taken on a beetle spin.

THE favourite time of year for a lot of keen anglers including me has arrived.
Closed season for bass is ending and from September 1 we can chase those feisty wild bass that haunt our dreams and make our casting arms twitch. If you’re new to chasing bass in creeks, winter is the time when they head down into the brackish water to spawn.

To protect them while they go about their business, Fisheries Queensland has implemented a closed season in tidal waters during June, July and August. This closed season may seem like a pointless exercise to some, while other underhand-ed anglers head out to ‘target’ alternative species in known bass-rich rivers and creeks. The stress of being hooked, fought and handled, even with the utmost care, can disrupt the spawning cycle. 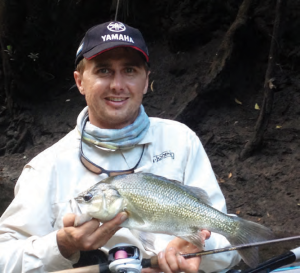 Deano with a good size fish from his secret creek. 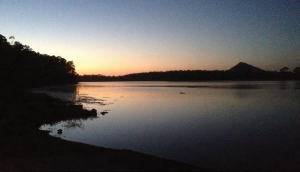 Another great morning to be chasing bass.

The association also organises its own fishing competitions and hosts several others throughout the year.
Though chasing bass in Lake Macdonald is exciting and rewarding, there is something about the smash and crash of a wild bass as it hits your lure and heads straight back to its snag.
I believe wild bass, pound for pound, will out-fight an impoundment bass any day of the week.  This is the reason many anglers cannot wait for the start of September.
My favourite areas to chase wild bass are the smaller creeks around the Sunshine Coast and hinterland including the upper Mary and Noosa rivers, Yabba Creek and a couple of small creeks that may not have names.

These smaller creeks are great for kayak anglers as they often have no real launching facilities for anything larger than a yak, and sometimes you will need to portage your craft over rock bars, logjams and various other structures along the way.

The majority of bass in these smaller creeks average 25-30cm, which on light gear will give you a good fight, but be ready for the odd bigger fish.  I have landed fish up to 45cm in some fairly skinny water and been dusted by a few that would be bigger again.

The common factor with these wild creek bass is their competitiveness.

The fact that they don’t know when another food item will come along means when they are hungry they will annihilate anything that takes their fancy, and even small fish smash large lures.
Early morning is my favourite time to be on the water because bass prefer to hunt in the low-light periods of dawn and dusk.
During these times, using surface lures is an exciting way to get hooked on bass and lure fishing in general. Surface fishing will definitely get your heart racing and keep your senses alert as you deftly work the lure across the top, watching its every move until ‘boom’! The explosion of a bass hitting your lure right in front of you is like an addiction.  It will stick in your mind and make you want to come back again and again, just waiting for that next hit.

One of my favourite surface lures is the Z-Man FrogZ, even though it is quite large and when rigged weedless the hook-up rate can be a bit ordinary if the bass are timid.
There is something about a frog that bass can’t get enough of, and I have seen the same bass just keep hitting the FrogZ until it hooks up, with one fish last season hitting my lure five times during one retrieve.

Towards the end of last season I took one of the Pop FrogZ, cut it down behind the pop head and rigged it on a single J hook so the hook point rode up. This rig stayed relatively weedless but definitely had a better strike to hook-up ratio than the traditional full-sized weedless-rigged version.

My next favourite lures for creek and river bass are small-framed spinnerbaits.

These create a lot of vibration, which helps the fish to home in on your lure in murky water, and when the frames are straight they are very snag resistant. As a bonus, it’s not just bass that love spinnerbaits, with many decent sized golden perch falling victim to them in my time of chasing bass. Many versions are available but I tend to tie on a purple or mauve scale colour as a starting point and go from there.
The purple seems to work well in most areas and if it’s not doing the job I’ll move to either a brown/gold or green/yellow. In the same family of spinnerbaits, often a beetle spin with a 2-2.5” grub attached will do the trick if the fish are a bit timid. The smaller size and slightly less vibration will usually turn pickers into fish in the bag, and if all else fails slap a bit of scent on it and hang on.
Hopefully this has tempted you to pack your gear and get back to your favourite bass creek to chase these wild thugs.
Or maybe you’re new to this game, and in that case I hope I’ve given you a few ideas to try next time you’re on the water looking for that adrenalin filled hit that could end with you landing a PB bass from skinny water.

I look forward to talking to you again very soon.
Stewart Hansen
Please comment below.

Ever since Stewart can remember he’s been chasing fish via many different methods. He enjoys learning new techniques and this had led him to meet some great people and visit beautiful locations. Since discovering kayak fishing, Stewart has found he loves the peacefulness that comes from drifting down a small bass creek and even more so the challenge of doing solo battle with a bluewater speedster. Recently he’s started working at Hooked on Angling & Outdoors in Tewantin, so if you’d like to have a chat and learn more about yak fishing, drop on in.
Previous Smoky pork brawn
Next Stalking a monster stag in southern NSW