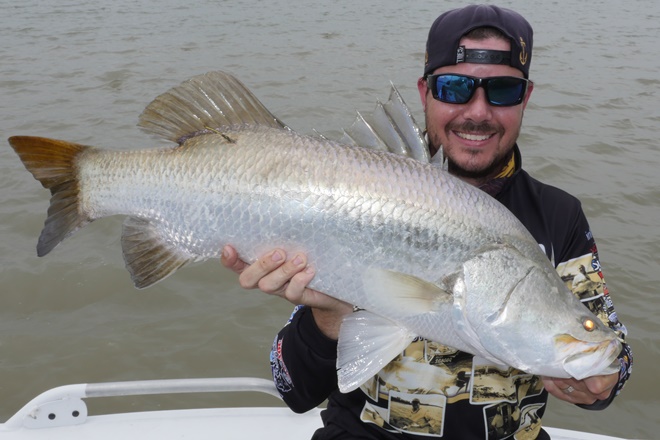 The author with one of two recaptures for the team in the Rocky Barra Bounty.

BEFORE I get into the success of this year’s Rocky Barra Bounty, I would like to run through a quick local report.

With the saltwater barra season closure, a lot of anglers have headed for the impoundments. Callide and Awoonga dams are only a short drive from Rockhampton and have been fishing very well. Anglers have reported fantastic double-figure sessions at Awoonga. The lake is still rebuilding after a lot of the larger fish went over the wall. Barra from 50-80cm have provided fishers with plenty of fun. I really want to make the effort to get down there for a visit because I haven’t done much impoundment fishing at all.

King threadfin have been high on the estuary target species list and some quality fish are being caught. Greg Rogers nailed a 1.5m monster from the Port Alma area, which is one of the biggest I have seen locally. Inshore, fingermark have been turning up in unusual places. Anglers spinning for mackerel along the headlands and islands have been catching thumper fingermark on metals. How’s that for quality by-catch?

Speaking of mackerel, they are still around in numbers. The school and spotted macks are all full of roe, which is normal for this time of year as it’s spawning season. Places like Iron Pot and Ritamada have had plenty of action when the water stays clean enough, and we’ve had some good reports of big spotty mackerel around Humpy. Locating the bait is key to finding the macks. On the offshore scene, quality red emperor are being landed, especially on the fern grounds. Large-mouth nannygai are mixed in among them, which makes for a tasty Esky when that’s all you’re pulling up.

This year’s Rocky Barra Bounty was another ripper comp. It was the 20th anniversary and a credit to all involved to bring the Bounty from where it started to where it is today. For the first time since the net-free zone was introduced back in November 2015, the entire NFZ was fishable. The Fitzroy had been washed out the past two years, so lots of anglers were ready to see what the Fitzroy could produce. The tides were spot-on and it looked like the weather was going to play the game.

Rego night went well and it’s always a good idea to get there early because you can’t walk far without running into someone for a chat. This year the entire event was moved to the Gracemere Hotel. Gavin Pitts has been a long-time supporter of the event, so it only seemed logical to move the bounty to new headquarters at his hotel.

Day one was a real eye opener. The number of teams having a crack on the Fitzroy was hectic. A lot of traffic made it hard to get on spots found in the pre-fish but that’s what a competition is all about. We were happy to be on the board early with a 72cm barra gracing the net. It was a laugh at the time because my teammate Derek had snagged our first barra on the outside of the net by the treble of the lure. Almost a disastrous start but he didn’t panic and flicked the barra back into the net like nothing had happened. Meanwhile, my eyes almost popped out of my head.

Frenchville Barra Bash winners Col Brett and Mick Slade were out of the blocks early, putting some nice fish on the board. All the glory was soon taken by Clint Fannin when he landed a 124cm monster barra in the town reaches on a 4” Zerek Live Cherabin soft plastic. What a beast. We pushed hard all day and were very happy boating nine fish up to 81cm. This gave our Team Downtime a fourth-place standing. Col and Mick from Team Lethal Lures/Dobyns Rods were on top with 15 fish boated, followed by favourites Craig Griffiths and Steve Pill from Team Barra Jacks/Edge Rods with 10 fish.

Day two of the 2018 Rocky Barra Bounty started very average for us. We were on good numbers of barra but getting the bite was proving difficult. Come lunchtime, we had only boated two. I had a very bad case of the dropsies and was ready to throw myself overboard at one stage. Luckily we had a couple of cold beverages to relax the nerves. The afternoon came together for us, finally boating three quality fish to keep us heading in the right direction. I managed an 86 and 92 but it was Derek who stole the spotlight with his PB of 96cm. The anticipation when the barra was circling the boat and the relief when it hit the back of the net could have been heard for miles I reckon.

It was Team Barra Jacks/Edge Rods who found the purple patch, boating 20 for the day and putting them a long way in front. Local gurus the Beer and Bundy Boys also put on a brilliant display, boating 17 to move into second. Lethal Lures/Dobyns Rods had another good day, landing nine to hold onto third. Our efforts kept us in the top 10, sitting at fifth.

The final day was upon us and we had a slight change of plan. With the amount of pressure the Fitzroy would cop on the final day, especially with a high tide start, we decided to try a different system. Coorooman Creek had been fishing well over the previous month. We lasted about an hour after kick-off and although we had boated a lot of fish including golden snapper, flathead and cod, they weren’t the barra we were wanting.

At one stage we were sitting on a school of about 40 barra and when you’re throwing everything at them with no luck it can get very disheartening. We quickly pulled out and headed for the Fitzroy. We were fishing in no time but the other species just followed us around, including threadies and jewfish. Finally, we were rewarded with one barra but it wasn’t the fairy-tale ending we were hoping for. We had fished hard though and were happy with our overall effort.

This year, for the first time in the history of the Bounty, the final day’s progress wasn’t updated for all to see. All the competitors went to the presentation in the unknown, which added to the excitement. The crowd was abuzz with stories of great captures and also the ones that got away. We arrived early to help set up and it gave us a chance to get around for plenty of yarns and of course beers. It was great to meet up with fellow Bush ‘n Beach scribe Lachlan Baker. A very passionate fisher and just a down to earth fantastic young lad.

Bill and Shirley Sawynok as well as the Bounty committee once again outdid themselves with the running and setup of the comp. Stefan took care of the electronic side of the Bounty including the Track My Fish app everyone used to record and send in their catches. Now for the final results.

Clint Fannin took out the biggest barra of the Rocky Barra Bounty at 124cm. Clint was also part of Team Zerek, which won champion visiting team. I think Clint would have had leg cramps from getting up on stage and back off again so often because he also took out biggest three barra combined.

Blair Stratton won the largest threadfin category with a 138cm donkey. A bloody top king in anyone’s language. Peter Herbst got first place in the other species category, landing 27 fish. It was Team Barra Jacks/Edge Rods who took it out this year, with a total of 36 barra for 44,060 points. To put it in perspective, they were clear of second place by almost 20,000 points. It’s a credit to Griffo for all his hard work and knowledge of barramundi. He went to the Barra Nationals on the Daly River earlier in the year and won it too. That gives you some indication of what the man is capable of.

Second place went to Quintin Mclean and Aaron Dial of Team Beer & Bundy Boys, landing 23 for 25,095 points. Col and Sladey of Team Lethal Lures/Dobyns Rods came away with third, boating 24 for 23,110 points. These top three teams are always in the hunt at the Rocky Barra Bounty. They’re a very unique group of talented barra anglers. It’s going to take a lot of work for anyone to match it with them.

Champion angler was won by Griffo with 20 barra, while second place was taken out by Pilly with 16. Our Team Downtime held onto seventh and I managed ninth on the individual list, which we were cheering about. It’s our second top-10 comp finish for the year and we worked bloody hard to get there.

I’d like to thank a few people for helping us out. First of all, Luke Peisker because he offered his boat while ours was in the shop. Also, Lochie Reed and Clint Fannin for organising some specific lures we were chasing during the comp. And finally, Rifen Marine for squeezing us in to rectify a fault that popped up on Luke’s gauge the day before the event.

The 2018 Rocky Barra Bounty 20th anniversary comp is done and dusted. A big congratulations to everyone who either organised or participated and the amazing sponsors who keep coming back. We can’t wait for the local barra comps again next year.

If you’re keen on giving them a go, these are the Facebook pages you should jump on to get in on the action: Frenchville Barra Bash (May 25-27, 2019), WTF Women That Fish Barra Classic (TBA, usually around September) and Rocky Barra Bounty (TBA, usually around October).