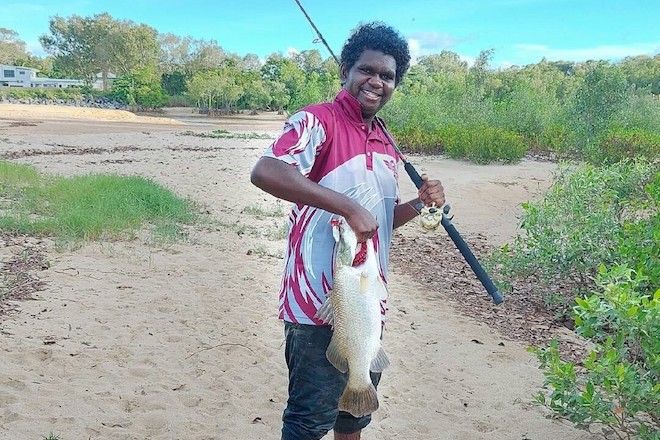 Taught to fish by his Uncle and Grandma, the author with his Poppy’s gifted Shimano Calcutta Baitcaster catching a legal barramundi at the mouth of Holloways Beach on a popper.

A lesson in patience

MY favourite pastime is having a joke with people. Interestingly, I always find it funny, however occasionally my quarries do not. As an example, when I hide their phone or car keys they begin to panic and worry. For me that’s the fun – to see the look of fear on their faces is priceless. patience lesson

Also, I often make up stories and have been known to tell a grey version of the truth for greater effect. A week ago, the tables were turned. The joker became the jokee. My name is Nigel and I am a good natured and occasionally cheeky 13-year-old from Wujal Wujal community, north of Cairns. Growing up on the banks of the Bloomfield River, you learned two things from a very young age.patience lesson

First, once you can walk, you learn to sidestep because you don’t want a big lizard hanging off your leg, and second, you learn to fish. My Uncle and Grandma taught me, and I would put my favourite lure on the table for anyone thinking they could out-fish either of them. All with a handline too – a fishing rod of any description was considered cheating in Wujal Wujal.

I moved to Cairns when I was 12 to live with my Nona and Poppy, and to go to school. I have never been one for maths and English. At home credibility was not measured in As, Bs or Cs, it was measured in the friends you had, football ability and your skill on the river. I was fairly good at all three of these, but knowing how many times 42 went into 6532 seemed irrelevant to me.patience lesson

No one was ever going to catch that many fish! Fortunately for me, I was offered a place at the Open Learning Campus, which is attached to the Cairns School of Distance Education. At this school my program is flexible, and I get heaps of support with my academic schoolwork. Best of all though, in the afternoon we have an Outdoor Bound elective.patience lesson

Naturally, I picked fishing as one of the units – finally a subject I am sure to get an A in. In this subject we also study survival, tide phases, tackle, filleting and cleaning, camping and rigging lines. At the end of term, we are allowed to go on fishing excursions, when it then becomes ‘game on’ with the rest of the class as we compete for either the biggest or best species.

Living in Cairns, the top of the tree is barramundi. My Poppy knew how much I loved fishing and generously gave me his Shimano Calcutta Baitcaster with braid. He said, “If you want to catch a barra Nigel, then this is the ultimate weapon.” I was very excited and promised to look after it and never lose it. Words I genuinely meant at the time but would live to later regret.patience lesson

At the end of the school term, our teacher announced we would be going to the Stratford Jetty and would be targeting barra. I was jumping out of my skin as I knew the place, I had fished there before, watched carefully the rigging and spots others had had success with and, best of all, I had my Calcutta. It was about 11am when we got there – not ideal for barra – but I did not care.

This was not maths or English, it was a school day, the sun was up and I was fishing. Life was good! As soon as we arrived, all the other students sprinted to the end of the jetty where the deep water was, thinking that was poll position, but I knew better. Staying close to the bank was the secret and floating a prawn bait back about 80m to a shady section was the tactic.

The others thought I was crazy, but this was something I was sure of. After an hour – though possibly closer to 15 minutes – my float was asleep, my line was slack, and the midday sun was starting to bite harder than a 3m saltwater crocodile. On hearing a commotion at the end of the jetty while the class jeered over an unfortunate toadfish, I decided to lean my rod up against the rails and go check the fish out.patience lesson

On reaching the others at the end of the jetty, all of my wishes came true. My float disappeared under a mountain of foaming white water, my line drew tight and my rod groaned as it folded in half over the steel railing. The only problem with the whole scene was that I was now standing over 20m away. Using all my Wujal Wujal sprint training, I attempted to cover the distance in less than a second and even contemplated diving from the 10m mark, but it was all too late.

Once my reel started to lift off the ground, the outcome had been decided and my fishing rod cut a very graceful path as it exited over the rail of the jetty and into the murky waters of the Barron River. The rod was gone and so was my promise to Poppy. To add insult to injury – and this could have been part of the subconscious nightmare, but I swear it happened – about a minute later I saw a massive barramundi emerge out of the water near where my bait had been… and laugh at me.

I decided to reply to the barra with a bit of not-so school-specific language, drawing not only the attention of my teacher but also three of the surrounding suburbs. At the end of the day and in the car on the way home, all the other students tried to console me and avoided stating the glaringly obvious.patience lesson

I had made a dumb error – an error I’m sure other fishers can relate to. It may not have been a maths or English lesson that day, but I learned so much. I will never ever leave my rod unattended again. I will appreciate gifts much more because the broken promise hurt me as much as losing the rod. And, most of all, I learned patience.

As my teacher said to me, “What is important in both fishing and life is that if you put yourself in good positions, your turn will come”. All I know is that at that point, you don’t want to find yourself 20m away.patience lesson

Permission has been given by the author’s school and guardians to allow his photos and story to be published.