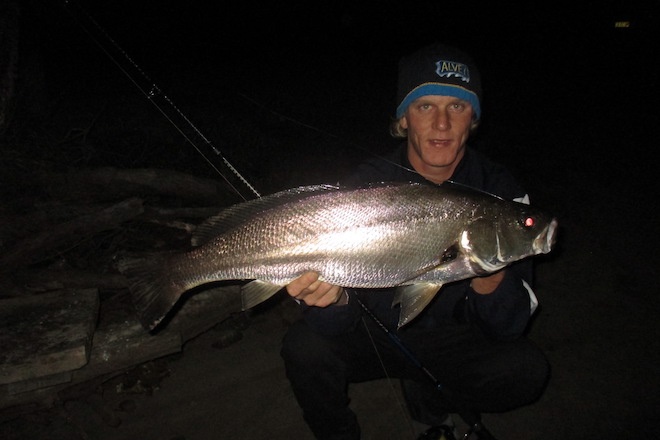 This well-conditioned school jewfish could not resist Mischa's 6” Storm shad, and even little soapies have been getting in on the action in recent weeks.

Soapies at Iluka despite swell and gusts

IF nothing else, fishing along the Clarence Coast of northern NSW has been consistently inconsistent, thanks mainly to the recent spell of 30-knot gusts that have been blowing from all points of the compass. Sure, there have been the occasional few good days to get out among the fish – along the beaches and headlands – however, large swells have come with the strong wind, which have flattened most beaches and filled in any half decent gutter or hole. soapies swell

At Iluka, only couple of spots held good water regularly – the northern end of Main Beach next to the rocks at the bluff and in at Back Beach, which is a small beach immediately south of Woody Head and is somewhat sheltered by the large headlands at either end. The Iluka Bluff saw a few nice jewfish taken on hard-bodied minnow lures on the handful of days the sea was fishable, with the best confirmed capture weighing in at 24kg and reliable reports of anglers getting dusted by larger fish.soapie swell

Given the amount of mullet and white pilchard moving along the coast currently, it is little wonder the jew are on the chew, but frankly they can be taken year-round in this area. Tailor on the whole have been harder to find than hens’ teeth – again, this has been due more to a lack of fishable water than numbers of fish in the ocean. Back in the 1970s and 80s, August was always dominated with howling westerly wind that in turn would bring all the travelling shoals of baitfish inshore, so one can only hope this month sees a return to the good old days… here’s hoping anyway.soapies swell

Inside the Clarence River, nice luderick were landed at all the regular spots such as the old ferry approach at Iluka, the big wharf along Goodwood Island and the Oyster Channel Bridge over at Yamba. Gulmarrad angler Graham Dowsett has preferred to fish the Yamba and Iluka breakwalls for quality luderick using cabbage as bait, because he found that the ocean fish take the bait more vigorously and a multitude of spots were available to fish with very few people.

Large jewfish have been a tad hard to find in the river, however I am certain that this month will see plenty of action as the annual run of sea mullet has ended, and now the big smelly critters will totally focus on the large schools of smaller flat tail mullet for the remainder of winter. I haven’t picked up a rod in anger as yet this year, due mainly to a combination of poor health and laziness, so if nothing else I’m inadvertently doing my bit towards the conservation of fish stocks.soapies swell

Both Iluka and Yamba breakwalls have held good numbers of school jew on soft plastic lures with the last hour or two of a run-out tide being the most productive time to fish. As usual for this time of year, the T-Piece on the Yamba breakwall is fishing reasonably well for jew on either live mullet or lures during slack high water at night, and the beauty of this location is that it can be fished in almost any wind or swell because it’s only a couple of hundred metres from the car park and in very sheltered water.

The old ferry approach at Iluka has been yielding the occasional school jew on lures during both slack high and low water, however way too many people are fishing it and shining torches everywhere for me to get keen to have a go. One piece of good news to come from the Iluka wall was that on a rare day when the swell abated, longtail tuna and even a handful of yellowtail kingfish were seen cruising the ocean side with not a land-based pelagic angler in sight.soapies swell

All in all, if the weather gods decide to finally be kind this month, anglers can look forward to taking bream, jew and tailor from the beaches and headlands. Jew inside the rivers on lures and live mullet and catches of luderick should hit their peak as August is always the best month for these hard-fighting fish. Offshore anglers will hopefully get a decent crack at the excellent snapper fishing that this part of the coast is renowned for, and with any luck there will be no shortage of jew and teraglin to boot.soapies swell

If we happen to get a stiff westerly and dead flat sea this month, I am going to spend a day at Forty Foot at Evans Head searching for schools of mack tuna, for old times’ sake. Please observe any restrictions in place regarding COVID-19 and do the right thing.