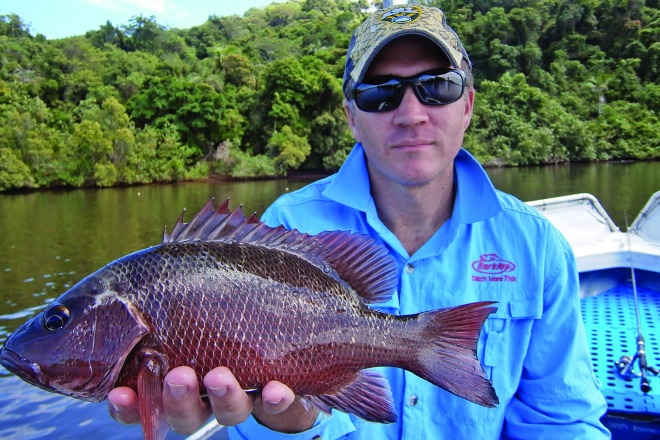 This small jack was caught in winter by fishing the shallower, warmer water.

Anglers’ guide to fishing with the weather – from a pro

IN this article I will talk about how to effectively go fishing with the weather that good-old Mother Nature throws at us anglers.

Being a professional fishing guide for over 20 years and being on the water every day has provided a baptism of fire and a staunch learning curve in trying to work with the elements that can change on a daily basis. Some of the challenges we negotiate are heavy rainfall (or lack thereof), water temperature changes and of course the main curse: strong wind.

Rain
Our local area has lacked good rainfall in recent months, so during April and May I was running my charters in the uppermost reaches of our rivers. When a river or creek doesn’t receive fresh rain inflows, the salinity levels rise and the bait and predatory species move as far up our rivers as they can. It is also worth noting that without rain, the water around the river mouths and lower catchment areas becomes very clear, which I have never been a fan of because bait will usually hide in discoloured water.

During drought periods I put my boat in at a ramp close to the middle reaches of our rivers and work my way as far upstream as the river system will allow. In contrast, when we receive good rainfall or even have a minor flood, my game plan is totally different.

The rain and abundance of fresh water will purge out the upper reaches and flush the bait and fish downstream towards the river mouths, so the lower catchments will become my areas of operation. Depending on how big a flood is, sometimes we anglers will have to put all our angling activities on hold because everything gets washed out to sea and along the coastline.

Eventually the balance of water clarity and salinity will return to the lower reaches, which is the time to plan your trips during the run-in tides. A tide line will occur as the clean oceanic water pushing in starts pushing the dirty flood water back upstream and you will be able to see a very distinctive clean and dirty water line.

This is the place to fish and every day I keep following the colour change further and further up the river until things return to normal. The flooding we received in early June is going to create a great tailor, bream, jew and luderick season here in July because a flood induces migratory and mass breeding conditions for our winter species.

For example, mangrove jack and whiting thrive on rising water temperatures whereas flathead, bream and jewies prefer the cooler water. So target the species that best favours the water temperature on the day.

Mangrove jack and whiting enjoy a water temperature of 25C and over while flathead, bream, jewies and tailor prefer the water to be 23C and lower.

If my clients request a target species but the water temperature does not suit, this is the time to get creative. To do this I use the water depth to adapt to the challenge. If I need to find a warmer water species I will fish the shallows because the sun warms shallow water easier and then if chasing cool water fish I will target deep holes where the sun cannot penetrate to warm the water on the bottom.

I’m not talking about finding massive changes in water temperature by moving from shallow to deep water, but a 1-2C change can make all the difference.

Wind
The wind has often been called the scourge of most anglers, but it is a factor of nature and out of all the elements it changes the most, in both direction and velocity.

The obvious answer to beating the wind is to fish the bends and leeward stretches of the rivers, and I often do this, but not always. I commonly choose sections of rivers where the wind and tide are opposing each other, which as most anglers know can turn a river into a choppy mess.

My reasoning is the chop stirs up the bottom, discolours the water and agitates the bait, forming a berley soup. Some of my best whiting sessions during the warmer months come from fishing the prevailing northeasterly wind blowing straight into a run-out tide.

Conclusion
Mother Nature will throw up different conditions on a daily basis and these challenges will make us better anglers once we learn not to get frustrated and instead overcome and work with them.
I look at a day on the water as being a big game of chess, which means studying the board before making your moves.

Smithy has been working as a full-time professional fishing guide for over 20 years, which makes him southeast Queensland’s and northern NSW’s longest-serving guide. Above all the commitments Smithy has in the charter industry, his overriding passion has always been to pass on his specialist experience to anglers and teach people of all ages and angling abilities the correct techniques required to catch all the Gold Coast’s estuary species on a variety of different lures. Smithy’s unique charter operations guarantees you will catch fish on lures or you don’t pay.
Previous Gold Coast Fishing in September: flathead, tailor, whiting
Next Targeting southeast Queensland tailor