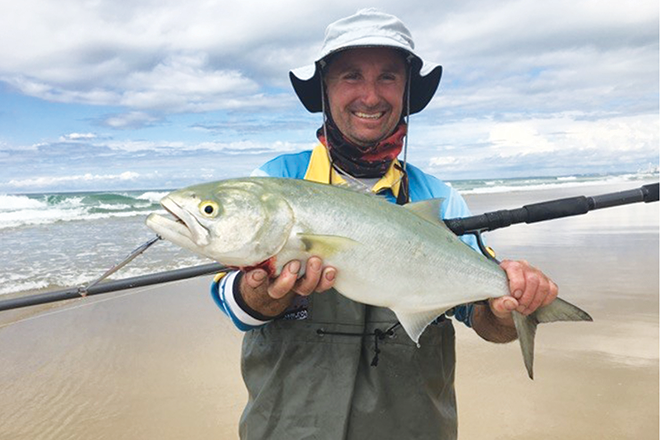 WESTERLIES and winter herald the time for anglers to be hitting the surf beaches and targeting tailor.

At the time of writing and for some period before that, the tailor fishing has been nothing short of sensational on our southeast Queensland coastal beaches and headlands.

I usually venture to Moreton Island once a year and fish for tailor, whiting, bream and flathead and do quite well using bait, but this winter I’ve been specifically targeting tailor at South Stradbroke Island. The only way anglers can fish here is by taking their boat to the western side of the island and walking across to the surf or fishing the northern end of South Stradbroke at the Jumpinpin Bar area.

If fishing South Stradbroke, you’ll probably find you have the beach to yourself, which is great, especially when you are getting a fish a cast. Unfortunately, my two little ones are still a few years away from walking across and there’s no way in the world I’m going to carry them in and out!

They usually stay with Leeann and the boat on the western side and cast soft plastics for flathead. I must admit, when fishing South Straddie the walk across can be a bit of a killer and you really have to wear waders in winter because the sand is like ice. Unlike my previous years of tailor fishing with WA pilchards, I have now moved to solely using metal lures.

The advantages include no stinky bait and less mess. Buying metal lures can be a little more expensive, however good ones are on the market that will suit most budgets. At the moment I’ve taken a liking to the SureCatch 50g Bishop metal lures that are great for long casts (more aerodynamic than the old pillie) and of course durability.

In the past, some gutters haven’t been fishable at high tide due to strong currents and it’s often close to impossible to keep a bait out without it sweeping to the left. Metal lures can be used in most circumstances and totally eliminate this problem. Casting to the back of a gutter can be hard with pillies but with metal lures it’s simply a no brainer, particularly if you have a surf rod with the casting capabilities and pulling power to set the hooks into a fish.

A couple of times I’ve ventured over to the beach at Straddie, looked at the gutters and thought that if I had been using bait, I wouldn’t have bothered. With a lure it’s a simple task of making the cast, counting the lure down for about four seconds and then commencing a quick retrieve.

At the beginning of the season I found my hook-up rate was an abysmal 50 percent but after speaking with Kord Luckus at Wilson Fishing I found myself using one of Wilson’s new 11’ Live Fibre X Long Range surf rods in conjunction with a high-speed ATC Valour saltwater reel (not available to the general public as yet).

Kord has been field testing this rod for some time and after using it on my most recent jaunt, I must say I’m ultra-impressed with the casting distance gained, with little effort required. My hook-up rate also improved. At the end of the session I wasn’t fatigued either, which was a bonus. The rods are available in 10’-13’.

At the moment it is quite easy to bag out on the 20 tailor per angler limit (in possession), however I keep only a few for immediate consumption. I bleed the fish upon capture and then take them back to the boat to put into an ice slurry. The minimum size limit is 35cm.

Tailor are quite a strong-flavoured fish and best eaten fresh, however if you freeze them with the skin on and lightly salt them, you will find they keep reasonably well. They are renowned for being a bit mushy if you keep them for too long in the freezer. When fishing for tailor, keep in mind that the area between Indian Head and Waddy Point on Fraser Island is closed to the taking of fin fish until September 30.

Flathead are one of the fish you are most likely to encounter around the Broadwater and through to Moreton Bay, with plenty of fish succumbing to trolled hard-bodied lures, cast soft plastics and bait. I mentioned earlier that the kids usually stay with Leeann on the western side of the island and fish for flathead while I’m tailor fishing.

Leeann and Selina were totally stoked with Selina’s first flathead capture on a soft plastic. Leeann cast out the Zerek Flat Shad and Selina wound the lure back while jigging it in her own little subtle way. Lo and behold she caught a 50cm-plus fish that she wound to the boat. She was so excited that she kept on fishing, explaining how to fish for flathead to Leeann first and then to me when I got back to the boat.

We then headed south towards Jacobs Well and while I cast soft plastics, Selina asked Leeann to cast out a lure for her to use. The closest rod had a Zerek Tango Shad tied on, so she cast it out and gave the rod to Selina. Once again she slowly wound in the lure with her little jiggly action and caught another.

We couldn’t get the rod off her after that and she landed a further two flathead while trolling and considers herself to be quite the flathead angler now. In the next month I’ll no doubt be concentrating on the flathead fishing because it’s not long to go before the Gold Coast Flathead Classic.